Bridezilla’s Gets Angry About Screenshot Of Her Dress Code. People Get Upset With Her. Now She Wants People To Do A Polygraph.

There’s nothing the internet loves more than a nasty bridezilla story. These stories often go massively viral, bringing embarrassment to the bridezilla and sometimes turning them into even more of a monster.

One bride was upset when a screenshot of her ridiculous dress code went viral. She posted a rant about the situation — and then someone screenshotted the rant, and now that’s going viral too. 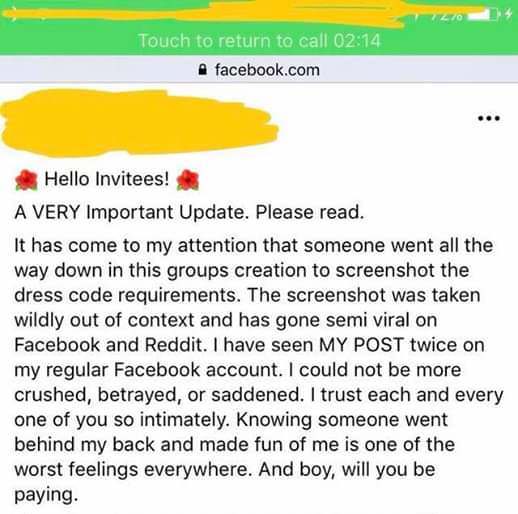 “It has come to my attention that someone went all the way down in this groups creation to screenshot the dress code requirements.

The screenshot was taken wildly out of context and has gone semi viral on Facebook and Reddit.

I could not be more crushed, betrayed, or saddened.”

In retaliation, she announces that all of her wedding guests are invited to a “Polygraph Party.” Every guest at the party will presumably be forced to sit there for a lie detector test (that is, if anyone actually shows up).

“Bring your inner Sherlock Holmes because we will be hunting out the snitch who put me on blast.

You think I’m kidding? I’m not.

We just bought a real polygraph test for $99 on Amazon.”

You can read the whole thing here. It’s long… and pretty hilarious.

If you’re wondering what this bride got roasted for in the first place, it involves a dress code that requires camouflage, green velvet, orange suede, purple fuzzy jackets, Burberry scarfs, and Louboutin
heels.

Also soda hats, and a synchronized dolphin dance on a beach. 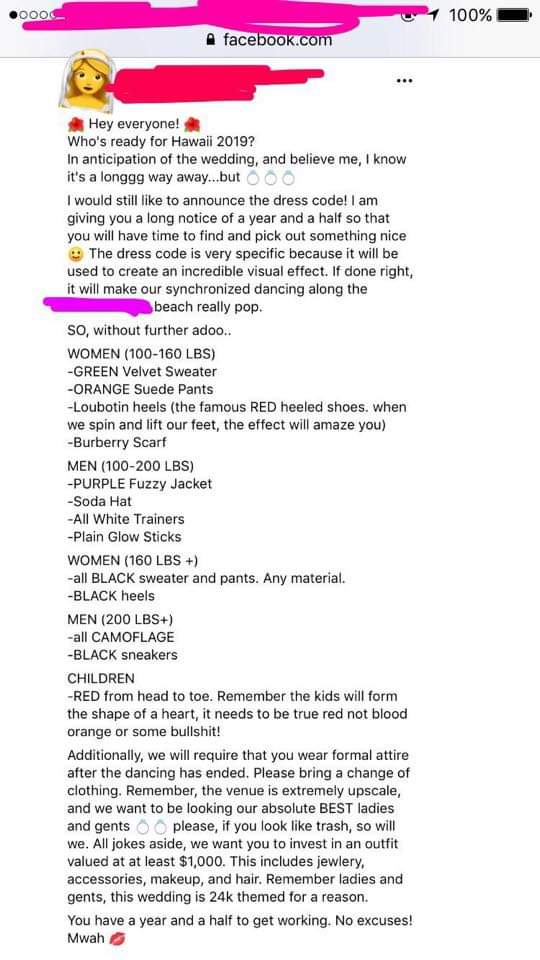 The bride is offering $100 to anyone who can tell her who posted her wedding info on the internet — but honestly, who can blame them?!?!

But hey, that’s my opinion. What’s yours? Do you think it was fair for her wedding details to get roasted?