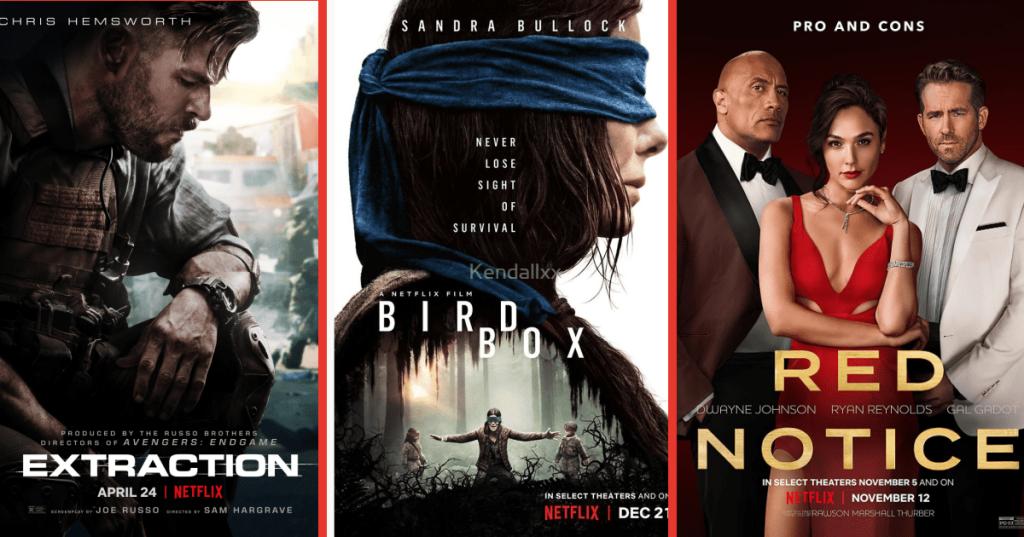 Check Out This Interesting List Of Netflix’s Most-Watched Movies

People can’t get enough, and there’s probably something to be said for being first (and still the most recognizable brand), right?

If you’re curious which movies people stream the very most – new, old, or original – you’re going to love this pretty interesting list.

“Spenser, an ex-cop and ex-con, teams up with an aspiring fighter, Hawk, to uncover a sinister conspiracy tied to the deaths of two Boston police officers.”

It has a whopping 37% rating from critics and 51% from the audience on Rotten Tomatoes, so it seems as if there are lots of regrets floating around.

At 205,470,000 streaming hours, this one clocks in at 8 million more than Spenser Confidential.

It came out in 2019 and stars Ryan Reynolds, which is always a ticket to some kind of success.

“After faking his death, a tech billionaire recruits a team of international operatives for a bold and bloody mission to take down a brutal dictator.”

Still, it’s critics rating is just 36% on Rotten Tomatoes, with audiences coming in just a bit higher at 60%.

The 2020 movie stars Joey King, and is described “with college decisions looming, Elle juggles her long-distance romance with Noah, changing relationship with bestie Lee, and feelings for a new classmate.”

Critics were not a fan on Rotten Tomatoes, giving the flick just a 27% rating, and audiences didn’t like it either, voting at just 38%.

One of the streaming giant’s first Oscar nominated films, people streamed this movie for 214, 570,000 hours.

The movie’s star-studded cast, including Robert De Niro, Al Pacino, and Joe Pesci probably had a lot to do with it.

“Hit man Frank Sheeran looks back at the secrets he kept as a loyal member of the Bufalino crime family in this acclaimed film from Martin Scorsese.”

It’s not a surprise that 95% of critics and 86% of audience members were on board for this one via Rotten Tomatoes, and is the highest rated movie in the top 10.

“Released from prison into a society that won’t forgive her, a woman convicted of murder searches for the little sister she was forced to leave behind.”

16 million more hours went into Extraction, which came in at 231,340,000 hours. It could be due to Chris Hemsworth in the starring role, or maybe people were really huge fans of the graphic novel that came first, Ciudad.

“A hardened mercenary’s mission becomes a soul-searching race to survive when he’s sent into Bangladesh to rescue a drug lord’s kidnapped son.”

Critics and viewers had around the same impression with this one, with critics coming in at 67% on Rotten Tomatoes and audiences at 70%.

“After accidentally crash-landing in 2022, time-traveling fighter pilot Adam Reed teams up with his 12-year-old self on a mission to save the future.”

Rotten Tomatoes ratings came in at 68% from critics and 74% from audiences.

“Five years after an ominous unseen presence drives most of society to suicide, a survivor and her two children make a desperate bid to reach safety.”

Critics on Rotten Tomatoes liked this one a bit more than audiences, giving it a 64% to their 57%.

One of only two movies to cross the 300 million hours views mark (it got 359,790,000), this one boasted quite the star studded cast (Leo DiCaprio, Jennifer Lawrence, Meryl Streep, and Jonah Hill.

“Two astronomers go on a media tour to warn humankind of a planet-killing comet hurling toward Earth. The response from a distracted world: Meh.”

Critics on Rotten Tomatoes only gave this one a 55%, while audiences were a bit more generous with 78%,

People streamed this one, starring Dwayne Johnson, Gal Gadot, and Ryan Reynolds (yep, again) for a total of 364,020,000 hours.

“An FBI profiler pursuing the world’s most wanted art thief becomes his reluctant partner in crime to catch an elusive crook who’s always one step ahead.”

Critics and audiences are totally split here, with the former only giving the flick a 36% on Rotten Tomatoes.

It has the highest audience rating on the list – 92% – so you’ll have to check it out and decide for yourself.

Some of these definitely surprised me, and in all, that’s a lot more views than I would have expected.

What’s the best movie you’ve watched on Netflix? We’d love to hear about it in the comments!