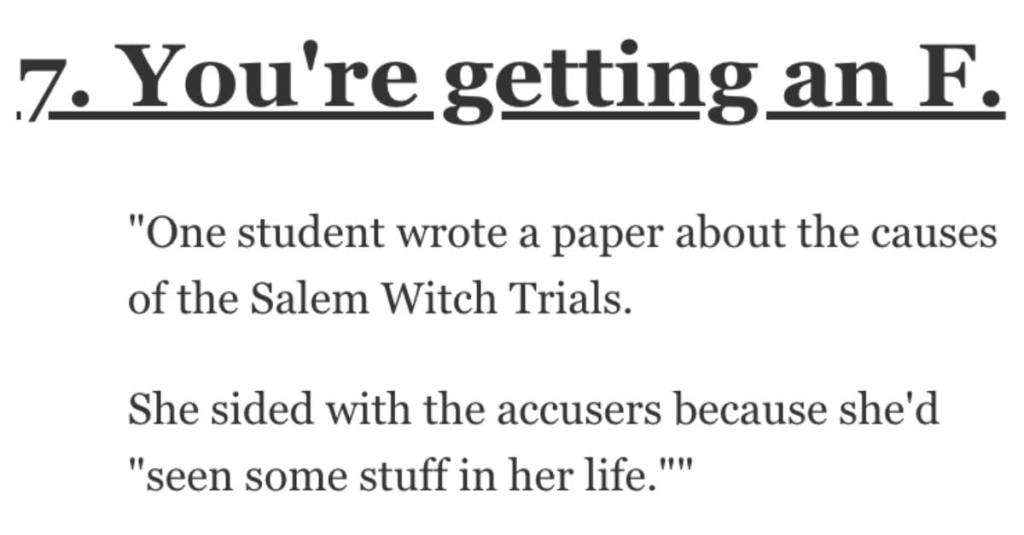 Maybe getting into college isn’t that hard, after all…

Or at least you might be thinking that after you read these responses from college professors who don’t seem to be very impressed by some of their students.

Professors talked about their not-very-smart students on AskReddit. Let’s take a look.

“I once spent an hour explaining to college junior that an even number is divisible by 2.”

“A student wrote in a discussion board about Lord of the Flies, “I like how they saved all the flies. That was my favorite part.”

If you’ve read the book, you can guess the look on my face.”

“I once got an exam essay that mentioned how much Nelson Mandela hated the Jews.

After scratching my head for a bit and wondering if I’d missed some obvious signs of his anti-Semitism I realized she meant Mengele.

As in Josef Mengele, the Nazi “Angel of Death.” Hard to think of a worse person she could’ve confused him for.”

“Once had identical twin sisters who turned in identical essays.

Both were directly plagiarized from a Google search and received identical zeroes.”

“I had a student include numerous emojis in a term paper.

A different student came to my office a week after the final, and asked me why she had failed the course.

She hadn’t turned in a single assignment, or written the final.”

“I had a girl come in with a research paper bibliography that listed “my mom” as a source several times.

When I pressed, she told me her mom looked up everything and sent it to her and she just…put it in the paper.

She told me she had always done it that way.”

“One student wrote a paper about the causes of the Salem Witch Trials.

She sided with the accusers because she’d “seen some stuff in her life.””

“A student turned in a paper about ‘gorilla’ warfare in South America.

It was so poorly written she couldn’t tell if it was a typo, or if they genuinely thought Colombia had been overrun by a Planet of the Apes style revolution.”

“There have been disturbingly high numbers of students on a performance based music degree who can’t read music.

Not musicologists or conceptual composers who could in theory get away with it. No, these were people turning up expecting to study western classical performance.

There was even a master’s student once…”

“Had a graduate student who couldn’t code for the life of him but was a software engineer at an undisclosed incredibly large aviation company.

He couldn’t accept that other students who didn’t have jobs were better than him and that the people grading him “didn’t have jobs”. Sent death threats because we failed him on an assignment where his code didn’t run.

He complained to the higher ups and got a C.”

“My wife has had multiple students who are fundamentally technologically illiterate.

Numerous students have had no idea how to use Word or Excel–including one who used their email as a word processor (the University provides students with Office). There have also been students who struggle with installing programs on computers.

What’s disconcerting is it’s becoming an increasingly common issue–as an older millennial, the idea that kids are becoming less technologically proficient is so bizarre.”

“I worked at my university writing center and saw a lot of really terrible writing. SO MANY poorly written essays.

I really don’t know how you can graduate from high school without at least being able to perform simple tasks like “Point to your thesis statement.”

The whole point of a writing center was to teach students to correct their own work, but there was a direct correlation between how awful a paper was and how likely the student was to throw it at you and say “I’m going to go have lunch. Will you have it fixed in an hour?” then try to leave.

The tutors all got really good at an authoritative, “Stop right there! Sit down. Now let’s talk about how YOU are going to improve YOUR paper.”

The most frustrating papers were the science majors. I could never tell if the paper was terrible or I just wasn’t following the details of their experiment on chlorinated aliphatic hydrocarbons or whatever.

The absolute worst was the ENGLISH MASTERS DEGREE STUDENT who came in several times with absolute gibberish. To be fair, English was his second language but… are you absolutely sure you do not want to consider a career change, my good sir?”

Now we want to hear from some more teachers!

In the comments, tell us about some of your students who are…less than spectacular.