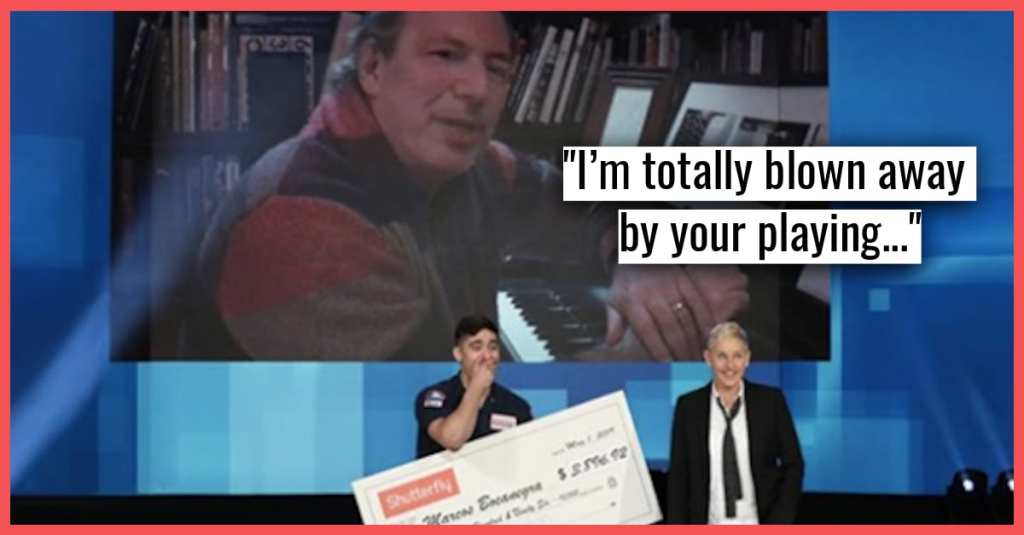 Marcos Bocanegra of Temecula, California has the kind of piano skills few will ever possess, but all of us deeply admire.

The twenty-year-old Costco employee‘s passion for tickling the ivories recently got him a lot of attention, and it all started when Marcos shared a video of him playing a piano at work.

I love playing on the pianos that come into costco pic.twitter.com/FQhRdRkV2C

If you said Ellen DeGeneres, you clearly read the title of this post!

She invited Marcos to appear on her show, so he brought along his mom and his dad to Santa Monica!

I just would like to thank everyone whos been supporting me along with my amazing parents! Iwouldnt be here playing for @theellenshow if it wasnt for all of you ! Thank you guys!! It airs around 3 pm !! #theellenshow #ellentube

What happened next is what Ellen does best…

First, she helped him pay off the remaining balance on his baby grand piano (nearly $4,000) thanks to corporate sponsor Shutterfly.

You see, Marcos has an idol he has looked up to for years. That person is Hans Zimmer. If you don’t know who that is, he’s one of Hollywood’s most famous music composers, and the musical mind behind the soundtracks for “The Dark Knight,” “The Lion King,” and “Interstellar.”

So yeah, he’s a big deal to a guy who loves to play piano.

You know what’s coming next, right?

Watch it for yourself…

Here’s what Zimmer said to Marcos:

“I’m totally blown away by your playing and I hear you’re really into film score so why don’t you come down to my studio and hang out and we can jam and maybe come up with something cool.”

Dreams do come true! Just keep at it and make sure to put in the hard work!