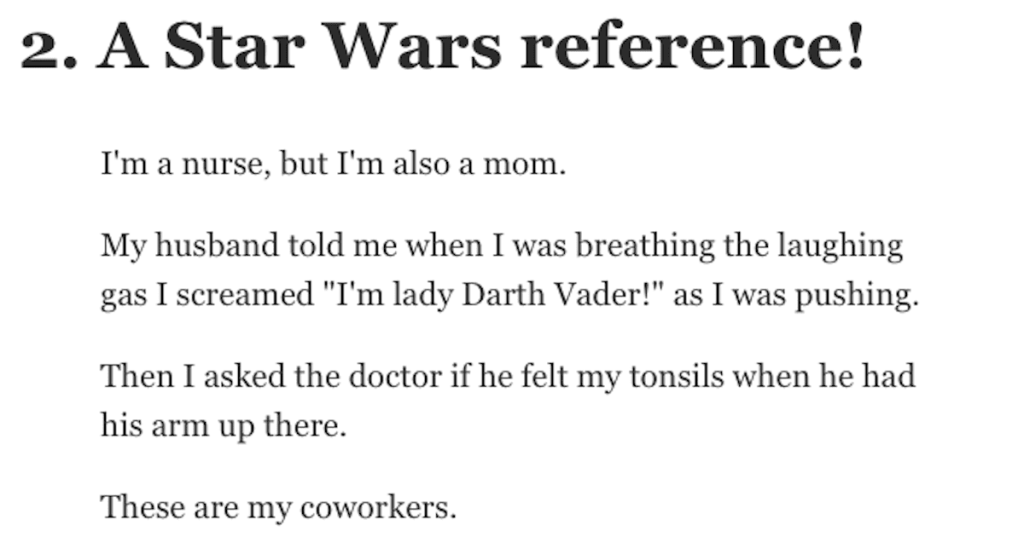 After reading the following stories about childbirth and the insane things people say when they’re going through it… I find it surprising that people have children at all!

But hey, that’s what we do. Most people will have a kid (or two or ten) in their lifetime, and so childbirth is a shared experience that spans the test of time.

Check out these 12 stories and try counting how many times you laugh.

1. Get that woman some ice!

My wife told me, in a satanic voice, to “get better ice chips, these suck!”.

I am not sure what the quality issue was, but I ran and got her a different cup full.

My husband told me when I was breathing the laughing gas I screamed “I’m lady Darth Vader!” as I was pushing.

Then I asked the doctor if he felt my tonsils when he had his arm up there.

These are my coworkers.

3. The most awkward birth ever

I’m a nurse and one of the strangest things that I’ve seen happen while someone is giving birth is one patient decided to tell her boyfriend that it wasn’t his baby.

That made the whole room silent and the boyfriend just left without saying a thing.

During labor, about a half an hour before the god awful ripping and tearing, I was losing my shit.

My older sister panicked and sort ran around the room. My mom, the birth coach, said to my sister to give me a focal point. Something to concentrate on so I didn’t jump out of the nearest window.

My sister lifted her shirt and shows us her boobs. Hilarity and awful pain ensued.

After a long contraction, I said quietly “I’m gonna set everyone in this room on fire.”

Everyone laughed, including the nurse, but I think my devoutly Christian mother-in-law started to cry.

Not exactly during labor but right after: I had a very bad tear during natural childbirth which meant lots of stitches. Add to that it was training day for one of the med students and it was taking a long time. A really long time.

Finally, I look down between my knees and ask,

“What the hell? Are you guys weaving a friendship bracelet down there?!”

Both doctors, the intern, and the med student burst out laughing so hard they had to stop working. Apparently there was some issue with how the intern was stitching me up & things had gotten tense. This lightened the mood quite a bit.

After I had my son I was pretty wasted on all the pain Meds they’d given me.

I looked at my husband and said ‘honey, Condoleezza Rice is out there waiting for me, tell her I can’t come out to play today, I just had a baby.’

I had a c-section and was pretty out of it.

When they held up my daughter and said “here’s your baby!”

I responded “that’s not mine, I’ve never seen it before in my life. Take it to lost and found.”

A young couple, mom and dad were both around 18 if I recall correctly, first baby for them both.

Mom’s pushing and Dad is doing this awkward jig wanting to be helpful but not really knowing how to be helpful.

Dad jumps up, runs to the counter, puts on rubber gloves, and gets into football receiving position, like 10 feet away from mom’s legs.

We all burst out laughing and he was very embarrassed to learn that babies do not shoot out across the room to be caught like a football.

When my mother was pregnant she and my dad decided to have an amnio. A stand-in doctor was there the day she found out the results, and despite Mum’s instructions that she did not want to be told the sex, the doctor congratulated her on having a healthy little boy.

My mum freaked out and decided not to tell my Dad, so as not to ruin the surprise.

Fast forward to the day of my birth, I’m brought into this bright world without a penis. The doctor congratulates my mother on her little girl. My mum responds by yelling “You’ve got to be f*cking kidding me!”.

Silence from everyone in the room. The doctor then has a serious chat with my mum about loving me even though I am a girl, etc, etc.

Turns out the amnio results were mixed up with another woman of the same name.

I have a few funny stories. I am an OBGYN resident doctor.

Lady was pushing for 2 hours and the head was finally crowning. She had like 1-2 pushes left to deliver the baby. Suddenly, “never mind I don’t want to do this anymore!” People aren’t in their right mind truly so rather than coddle them it is honestly best to just sternly say, “No, you’re getting this baby out now, Ok? Now push!” She delivered the next push 🙂

Had a complete druggie try to deliver her baby with her legs together. Normally that would make it hard to deliver anyhow, but for her the baby kept coming and just delivered behind her closed legs. One of us basically threw our body under her ass to keep her from sitting on her baby’s head.

While the baby is crowning, “Why??? Why do I keep doing this to my self?” (as in keep getting pregnant).

Teenager delivering her baby and the baby daddy is there who is also a teen. Pooping is common in deliveries… I’d say 30-50% of the time. Anyhow she starts pooping and gets really self-conscious and turns to her boyfriend yelling, “Don’t LOOOOOOOK!”

After the baby delivers you still need to deliver the placenta. Usually not a big deal but a lot of blood and fluid comes with it often. As she pushes it out her husband’s face goes white and he says, “Woah.” and has to sit down as he faints.

Had an interracial couple – Mexican mother, Black dad. She had broken up with him after getting pregnant. As she is pushing (without an epidural) she yells, “God damn I hate that n*****!” Not much you can do other than ignore it.

Some times people are just damn ignorant. I had a lady come in who was >42 weeks pregnant. I’m sorry, even the most crunchy of midwives will agree it’s time for that baby to come out. Anyhow the dad is all like, “what do you mean you’re going to induce her to deliver? You think I’m going to let you get up on top of her and jump on her belly then reach down and pull my baby out?!” Wow, dude. Also “you keep talking about contractions! What are they?!” This was his third child. He didn’t know what a contraction was. Wat da?

As I mentioned above women often poop while pushing. A lady had a massive BM which really stank up the room. She turns to her husband and mother and yells, “who the hell farted?!” That was embarrassing.

After delivery the vagina and vulva can really burn after being stretched out that much. I had a lady exclaim, “damn I could really use an ice cube on my taint!”

Usually in a c-section the father of the baby sits with the mother in the OR as we do the operation. Sometimes it’s the patient’s mother, too. In this case it was a young white couple where the father didn’t want to be in the OR. When the baby was cut out but the patient couldn’t see it yet b/c the curtain was still up, her mother who was present goes, “well, the baby isn’t black!” The patient exclaims, “Mom, what the hell!?”

Some people are into doing it SUUUPER naturally. So they have fans, incense, and storm music in the background. Often they will use chanting to calm themselves. One lady would whisper, “Peace….Peace…Peace” between pushes. Anyhow as the baby was crowning and she was really feeling that ring of fire she half snaps out of her Zen character and yells, “Peace!..Peeeeeace!!! Oh f*cking Jesus it’s on fire! someone put water on it!”

Those are just a few 🙂

Wow! That last one was a doozy. How many stories do you think that doctor has? Yikes!