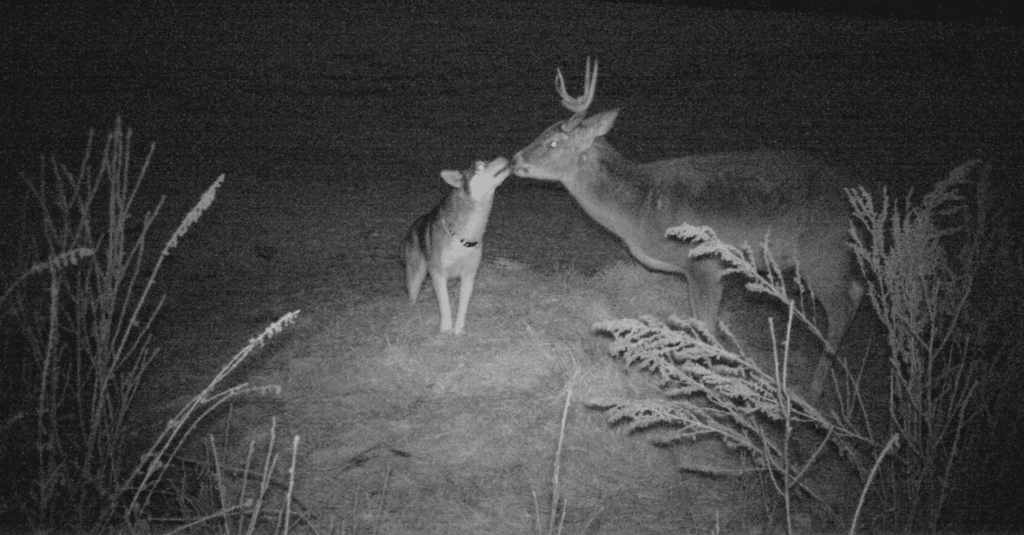 Dog Runs Away From Home, Then Trail Camera Finds Her in the Woods Kissing a Wild Deer

I love a good story that features an unlikely animal friendship and this is one of the better stories I’ve seen in quite a while. It’s the tale of a runaway dog and a wild deer who became friends. And, luckily for us, it was all captured on a trail camera.

Having a pet run away or disappear is an awful experience for anyone. And for a woman named Rachel Howatt in Manitoba, Canada, having her husky Koda take off was heartwrenching. Howatt searched the nearby woods and couldn’t find her beloved pooch.

You can only imagine what went through her mind as she imagined Koda, loose in the woods with wild animals and dangers present at every turn.

Then, a few days later, Koda reappeared at her house as if everything was completely normal.

Howatt asked a neighbor if they could check their trail camera to see if Koda was by chance caught on the camera in the days she went missing.

And, to Howatt’s surprise, the cameras captured Koda’s excellent adventure!

It turns out that Koda was spending time with a male deer, eating, playing, and even napping with the big buck.

“It was quite something. Based on the time they spent on the frame, it looked like they spent over 12 hours together.

There’s also another photo where there’s two bucks in the picture with her.”

“Huskies have such a free spirit. It doesn’t surprise me at all that Koda was trying to make a new friend.”