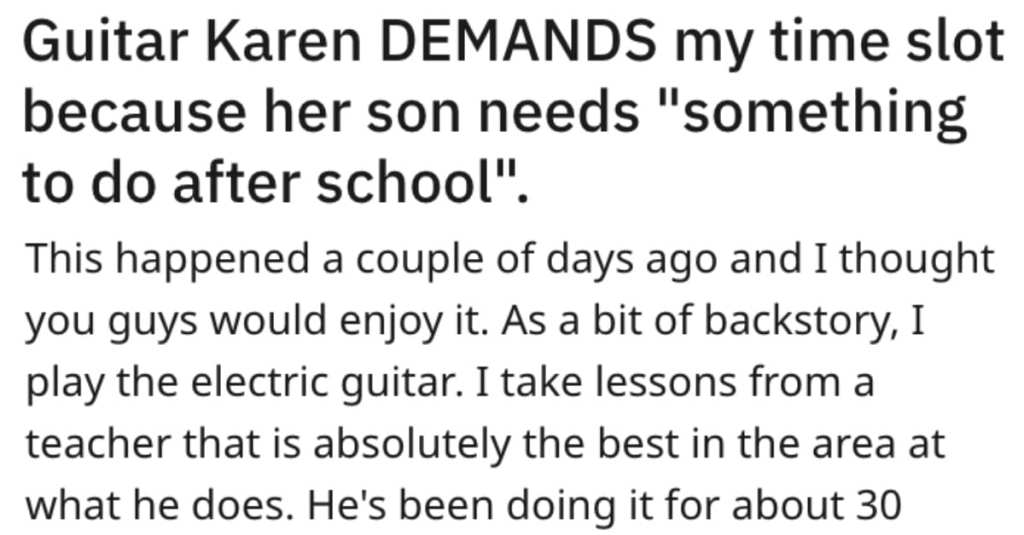 Karens really never cease to amaze us, do they?

And this story that someone shared on Reddit is a real beauty.

Guitar Karen DEMANDS my time slot because her son needs “something to do after school”.

“This happened a couple of days ago and I thought you guys would enjoy it. As a bit of backstory, I play the electric guitar. I take lessons from a teacher that is absolutely the best in the area at what he does. He’s been doing it for about 30 years now so he’s really, really good. Understandably, he’s also really, really booked up.

When COVID hit and everyone started doing online classes for school, he lost a bunch of students because they’d typically go to his class after school and since they weren’t in school or doing extracurricular activities, their parents I guess decided to yank them from guitar lessons too.

One of the things that makes my teacher awesome is that he tends to give scheduling priority to his older students (like me, 41) because they don’t give him the headache of having to manage every little thing between this and that thing for school. It kind of sucks for parents but he’s had enough of the headaches of rearranging everyone’s life because little Johnny has to play his leading role of being a rock in the school play.

Now this matters because now that kids are starting to go back into the classrooms where I live, parents are blowing up his phone trying to schedule their little darlings back into lessons, while us older folks have been dutifully attending (or doing online lessons) and paying the whole time. So if you’ve been doing that all this time and you’ve got the 3:30 slot and you like it, that’s where you stay.

This matters because of Guitar Karen. Guitar Karen’s son used to take lessons but she pulled him out for the last 9 months or so. In-school classes are starting up, and Guitar Karen wants as little to do with her kid as possible, so she has apparently enrolled him in every possible after school activity that exists. I know this because my teacher rolls his eyes as our lesson is about to begin because his phone is pinging like crazy.

I thought it might be an emergency or something so when he returned to the room, I said, your phone has been going crazy (he normally turns it off during our session) and he just mutters something and turns it off, talking about how this woman has signed her kid up for track, baseball, art, band and now guitar and in order to ensure he has something to do every single day of the week, he absolutely MUST have this 4:00 slot.

You can imagine where this is going. Guess who’s slot that is. Mine.

I’m super flexible with regard to the days of the week, just not the time of day (because I work until then). I told him as much but he’s like “no, I’m not moving you, don’t worry.” He turns off his phone and we continue on our lesson. Within like five minutes, his computer is going Ping! Ping! pingpingpingping! and he’s like “holy mother of f*ck.”and shuts the lid.

Blissful silence for the remainder of our lesson. Until he opens the classroom door and there stands Guitar Karen: A kind of heavyset woman with her lips pursed like she’s gonna give you a kiss, and her brow looking like it has permanently stuck itself in the scowl position and a “Mama Bear” t-shirt on (I sh*t you not)

“YOU!” she yells at me. Now I’ve never seen this lady in my life but she’s got no mask on so my instinctive reaction is to social distance my *ss right the hell away from her but she just Godzilla stomps her way in, knocking over a music stand and sending papers everywhere. She turns and shouts at the teacher.

“WHY WON’T YOU GIVE MY SON THIS TIME SPOT. HE NEEDS IT. YOU NEED TO RESCHEDULE YOUR OTHER STUDENTS AND STOP SINGLING ME OUT BECAUSE MY SON HAS OTHER ACTIVITIES.”

The poor guy can’t get a word in edgewise. She’s standing in the doorway so I can’t leave.

She looks me up and down. Me, who is very much a t-shirt and jeans kind of lady and is wearing a shirt that says “I like heavy metal, coffee, cats, and maybe 3 people.” and is like I BET YOU DON’T EVEN HAVE A JOB. YOU’RE PROBABLY SOME WASHED OUT COLLEGE DROP OUT. WHY’D YOU PICK THIS TIME SLOT ANYWAY. IS IT BECAUSE YOU KNEW SOMEONE LIKE ME MIGHT NEED IT? YOU NEED TO GIVE IT TO MY SON.

I also can’t say a d*mn word because this woman just won’t shut up.

Now let me reiterate that my teacher is the chillest guy on the planet. But he nearly died last year from sepsis on top of the whole COVID thing, so he’s REALLY understandably p*ssed when someone gets in your face and is stabbing your chest with their long-nailed finger and spraying insults without a mask on.

He gets between me and her and says YOU NEED TO BACK UP OR GET OUT. They take their confrontation out into the hallway. He tells me to go ahead and leave and he’ll handle her. I hear him tell this lady.

“Listen, loves_spain has been with me for years and I’d better never hear you insult her or any of my other students ever again. Your behavior is disgusting and you need to leave the premises now before I call security.” (We don’t have security in the building but she doesn’t need to know that — he was so fired up, I think HE could’ve landed her flat on her *ss in that moment).

She turns completely meek and is like “What about lessons for my son?” And at this point the teacher was like “absolutely not.” And she’s like “but he needs this!” and the teacher said “not my problem.” and acted as if he were dialing security on his phone. She scuttled out of there as I was leaving the parking lot. I wanted to give my teacher the biggest high-five.

He later told me he didn’t hear from her since then, but he thinks this isn’t the last encounter. I imagine she’s the type of person that will come down there every weekday at that time to berate whichever poor student has that spot because her son obviously NEEEEDS IT!!!

Here’s how folks on Reddit reacted after reading the story.

This person said that they think the guitar teacher was a hero in this scenario.

Another reader said that the guitar teacher should put the woman and her kids on blast for not following safety protocol. 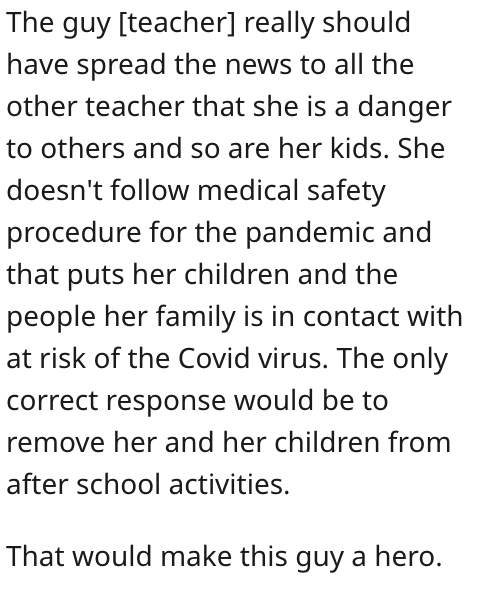 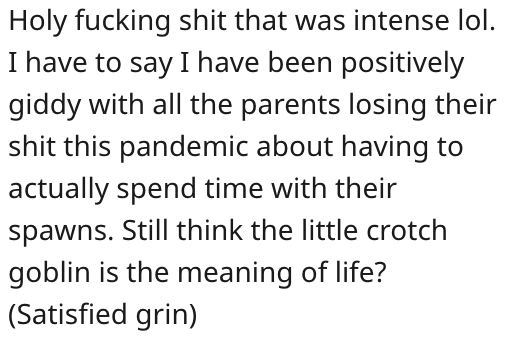 Finally, a person argued that Karen’s kid in this situation seems to be way over-indexed and it’s probably the mom here who is making her kids do too many activities. 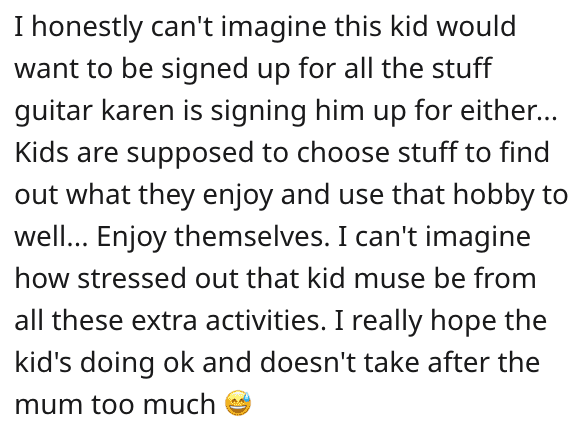 Have you had to deal with any Karens and their crazy behavior lately?

If so, tell us your stories in the comments. Thanks a lot!