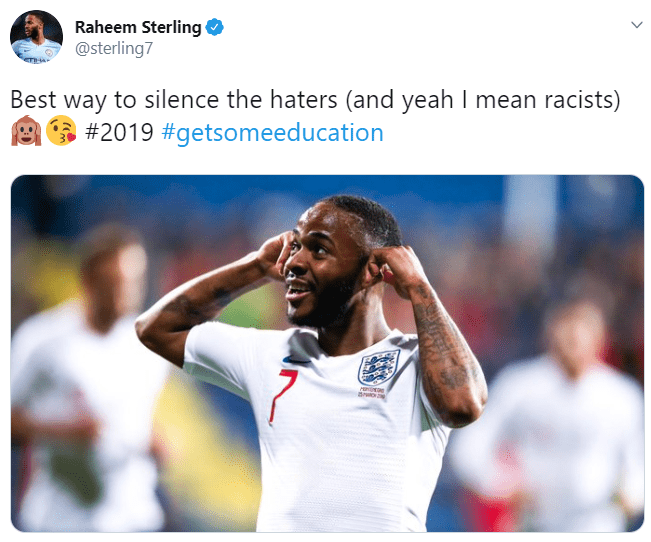 FIFA, the governing body of soccer (or football, as it’s known outside the U.S.), has updated its disciplinary code to address racism and homophobia aimed at players. It did this in part to put “FIFA at the forefront of the fight against this appalling attack on the fundamental human rights of individuals,” says the FIFA website.

FIFA says it is taking a “zero tolerance” stance on racism and any other forms of discrimination. According to the new code, referees can declare a match forfeit if racist attacks do not stop after two warnings.

Players have faced racism and other forms of discrimination on and off the field for years. Raheem Sterling, a player for Manchester City, has spoken out about how he has been treated by fans and how he and other black players have been portrayed in the media.

Best way to silence the haters (and yeah I mean racists) ?? #2019 #getsomeeducation pic.twitter.com/ohhkOJtdey

After one game against Chelsea, four players were suspended from attending matches after allegedly shouting racial obscenities at Sterling.

The new rules seem like a step forward, but will they help? Luis Paez-Palmer doesn’t think so, according to an article he wrote for Deadspin. Referees can already stop matches due to racism, but they never have, he wrote.

“If refs were already reluctant to stop matches, how will they react now that stopping a match comes with such huge ramifications?” Paez-Palmer writes.

Paez-Palmer suggests that having a FIFA official make the calls, rather than a referee, may be more effective.

Raheem Sterling of Manchester City discusses racism, the relentlessness of media stereotypes about black players and his decision to call out both after he was racially abused during a Premier League match in December https://t.co/X7k8RMyQcC

Ultimately, these players deserve better. They deserve better treatment from fans, fair coverage from the media, and the support of their league.