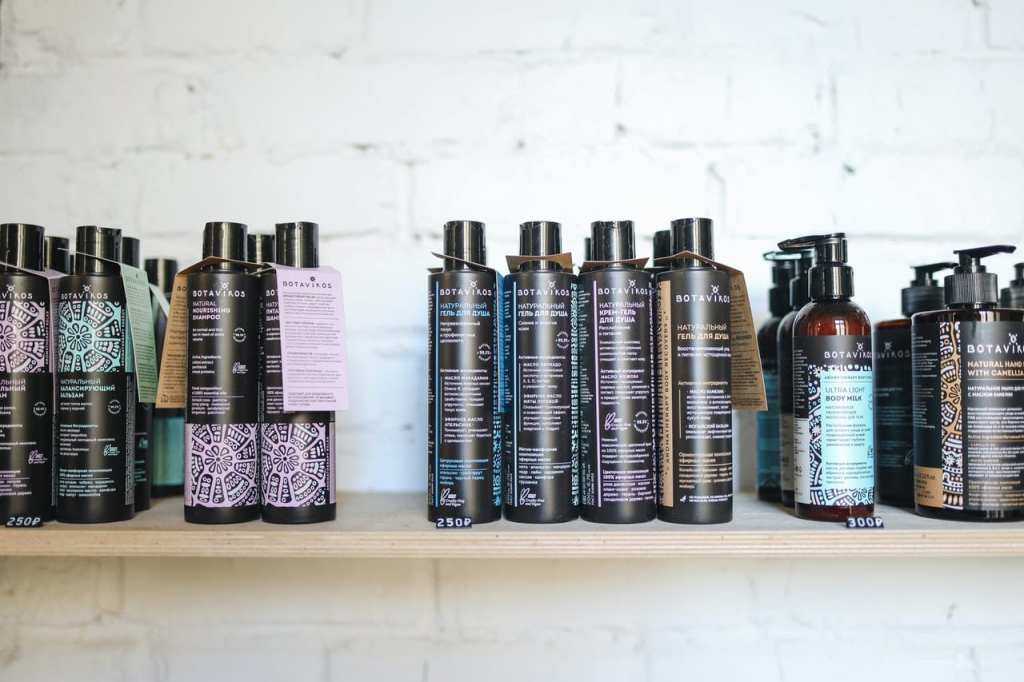 Relationships aren’t easy. Couples not only have to deal with personality quirks, but they must also learn to deal with different financial habits as well.

There’s usually one person in the relationship that would rather splurge on certain items, while the other person prefers to save money or doesn’t understand the other person’s tastes.

One guy made his girlfriend angry and then asked the Reddit AITA forum for their advice.

The answers got quite interesting.

The OP began by explaining that his girlfriend is into self-care as if that’s some sort of character flaw that requires an apology. He then let Reddit know that he doesn’t understand the point of custom shampoo.

Check it out for yourself below!

My (27M) girlfriend (25F) is really into what she calls “self-care.” We don’t live together but I spend the night at her place and have to shower there before work a lot. Whenever I shower there she asks me not to use her shampoo and conditioner and to use the other ones in the shower.

I thought this was weird and asked her why the other day. She told me she buys custom shampoo! I looked it up and it costs $32 to order!! I think that is such a waste of money and told her that. I’ve used the stuff and it isn’t any different from any other shampoo. I feel like she’s being scammed and is just wasting her money on vanity.

She doesn’t agree and I wanted to help her see what I mean. I bought shampoo and conditioner the same color from the brand my mom uses (I think it’s called VO5) and replaced the stuff in her bottles.

After she showered the other day, I told her how nice her hair looked. She responded “that’s why I use my custom shampoo.” So she proved my point! I told her what I did and she freaked out just because I threw her stuff away and helped her save money. She told me to leave and got really upset and said I made her feel dumb. Now she texted me that she has to reconsider if I’m emotionally mature enough for her.

She’s being crazy but am I an a**hole? What does shampoo have to do with emotional maturity? […] the bottles were already almost empty so i didn’t even throw that much away

If it makes you feel better, at least the OP learned his lesson, but not before dealing with the ire of fellow Redditors.

One commenter, Lizzymorales, wanted to let the OP know that it’s his girlfriend’s money.

After all, she must know how to budget and hold down a job, right? 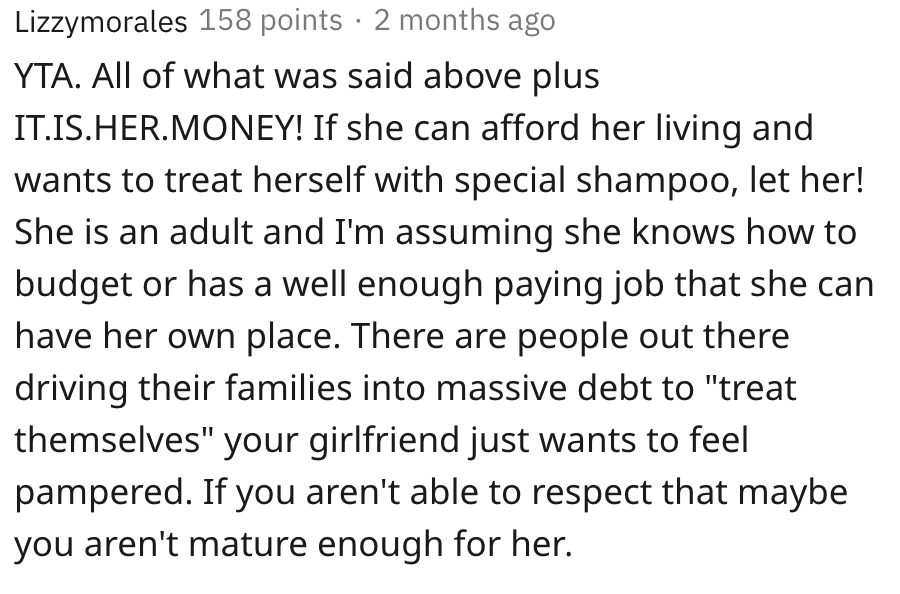 Hair types, health conditions, and past treatments can damage hair.

That’s why some people pay extra for high-end or custom shampoo. 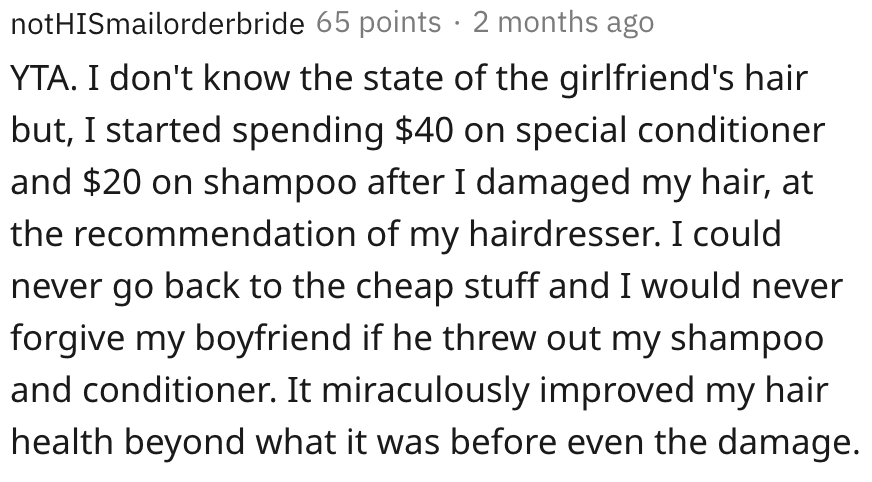 Once again, they also agreed with the girlfriend. 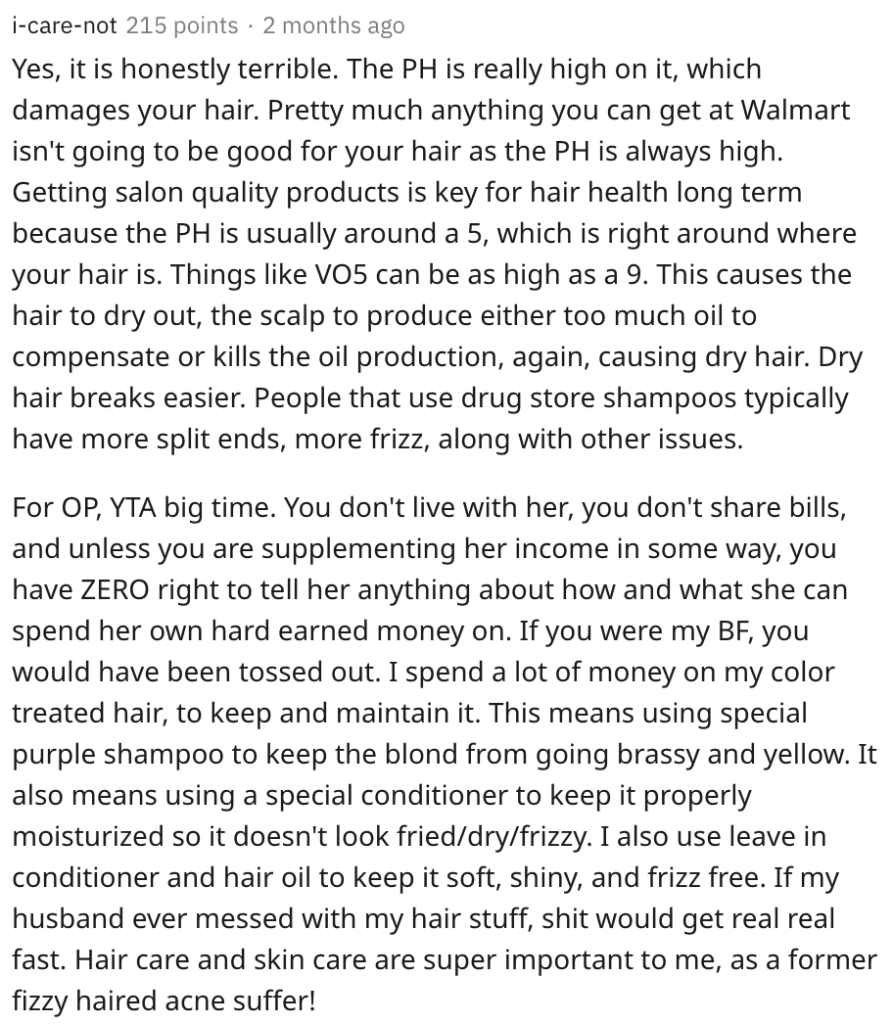 Thankfully, he recanted and displayed some growth.

If you go back to the original post, ShotTown2 provided a few edits and explained that he was grateful for everyone’s input.

He also wrote a few replies on the thread that prove he grew a bit.

Well, that was some argument. At least he learned that his behavior was totally uncalled for.

What did you think of this thread? What would you have told the OP?

The comments section is totally ready for your opinion!