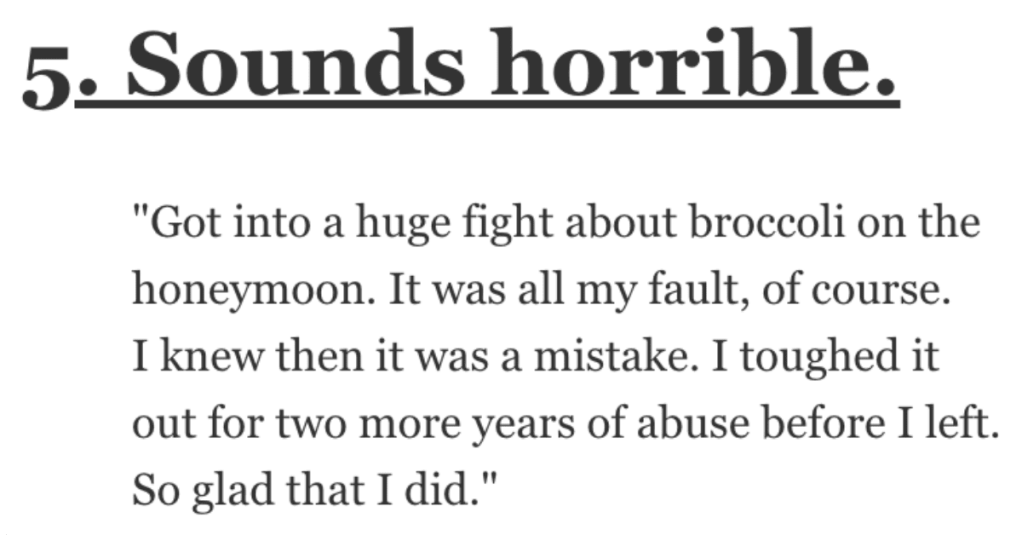 Guys Who Married Bridezillas Talk About What Happened After the Wedding

Why do we hear the term “Bridezilla” all the time and why are there even reality TV shows about this phenomenon?

And we’re about to get a healthy dose of stories from guys who actually married Bridezillas.

AskReddit users dished out the dirt about what life was like after the marriage went down. Let’s see what happened to these poor souls…

1. Only wanted the wedding.

“First wife was a Bridezilla.

During the honeymoon she realized she was married and the wedding day was history. She wanted the big wedding, which she had, not the marriage. The next two years were hell until she finally tapped out.

I was young and stupid and the thought of divorce never crossed my mind. I don’t know why it didn’t. I guess I just assumed I’d be miserable the rest of my life. When she told me she was leaving it felt as if the weight of the world was off of my shoulders.

On a happy note her parents were still paying off the wedding when we divorced. That’s what happens when you allow your daughter everything she wanted….including 2 wedding dresses.”

“She left me three months later.

After the wedding and vacation was over I told her we need to pay the debt we just accumulated. She said she didn’t have much on her credit card and could pay it off in a couple of months if I picked up some of her bills. I agreed and three months later she had her credit card paid off she told me she wanted a divorce.

We had a budget for the wedding and should have had no debt at the end but in the last few weeks before the wedding she suddenly had to spend a ton of money on wedding sh*t I had never even heard of before. And when I say she spent a ton of money it came out of my pocket.”

“Married for seven years before I bailed, best decision of my life.

Got married again 5 years later to a girl that just wanted a justice of the peace wedding, second best decision of my life.”

Then left for an alcoholic guy who had more money.”

“Got into a huge fight about broccoli on the honeymoon.

It was all my fault, of course. I knew then it was a mistake.

I toughed it out for two more years of abuse before I left. So glad that I did.”

“Divorce after 2 years, she moved her stuff out while I was at work. I cried and then when I got remarried to someone new, I realized what real love was.

Also, my ex sh*t herself on 5 separate occasions when she was black out drunk because she was an alcoholic. So I don’t miss that either.”

“My gf of 10 years is VERY down-to-earth and level headed.

We finally decided to get married later this year for a few reasons, and she’s feeling a lot of phantom pressure to do things a certain way. It’s not like there is an overbearing mom or catty friends applying pressure or expectations. It’s just the whole idea is overwhelming and filled to the brim with opportunities to make a decision you might end up regretting later (or forver).

I’ve taken a more active role in narrowing down options instead of asking her to pick a perfect solution out of 5,000,000 possible options. It’s helped somewhat, but there is still a lot of pressure on her (seemingly out of no-where) to make a series of decisions that all depend upon the first few BIG decisions that are weighing heavily on her/us.

All this to say… I can see how this kind of stuff could turn a normal woman into a lunatic. These types of events tend to bring latent family and friend drama to the forefront, and emotions are high before sh*t even really gets started.

My guess is that a lot of the Bridezillas were actually lovely people who calmed down and returned to being lovely people after the stress of the wedding stuff is removed.”

She’s definitely a pain in the *ss sometimes but so is everyone else. I’m also pretty laid back so a lot of decisions I leave to her because I just don’t care. If it’s a decision I do care about, I make the decision.

Without her, I wouldn’t have the 3 best kids on earth. She’s an amazing mom and our kids have our best qualities. We have fun all the time.

I think she was a bridezilla not because she was a crazy person, it was more about making the moment right for everyone and making it a great memory. She had a relatively rough life with her parents and there weren’t a ton of great memories. I notice she goes waaaaay out of her way to make great memories for the kids as she’s always planning stuff for us to do with them.

My army buddies said they could see it coming, I am easy going, enjoy almost everything, and she was upset after what looked like a perfect wedding. She later said she wanted a smaller wedding.

I don’t talk to her or read emails and texts from her. Full of anger and spite, and I tell her so usually in a reply.

Last year her tax return was deposited in my bank account, and I contacted her to ask for account details so I could transfer it to her. I got a three page email about how if I spent anything she would have lawyers go after me.

So I mailed a check to her, the slowest way possible.”

“I ended a friendship with a Bridezilla who desperately wanted me to attend her wedding.

She had it scheduled for the weekend of the eclipse in 2017. Something I had planned for 10 years. She asked me what my plan was and I said that I’m flying to the Missouri / Kentucky area. She wanted me to fly to Idaho where she lived.

I would’ve but all flights, hotels, and rental cars in Idaho and Utah were completely booked out. I couldn’t get there even if I wanted to. She said I didn’t care about her or her wedding and that I didn’t want to see her on her big day.

She claimed I put the eclipse (something I had planned on seeing for 10 ten years) before her lenny (someone I knew for six months. So I ended things really fast after that.

But from what I see, she still posts photos of her wedding to this day. Like every day she posts different wedding photos. It’s almost like she stopped living after her wedding.”

11. How about a Groomzilla?

We are talking costume changes between wedding and reception, yelling at the wedding planner, drag-out-all-night fights about whether we can add fruit kabobs so people would maybe get enough to eat, all that.

There was zero compromise; he made a lot of promises for things I had been wanting after the wedding and they never materialized, like a beach vacation and such.

“My brother married a bridezilla.

She yelled at my mother the day of for asking her where she wanted certain decorations at the reception site (there wasn’t a written plan so my mom had nothing to go off of). Never thanked my parents for financially contributing to the wedding. Accused a bridesmaid of trying to upstage her by getting a spray tan before the wedding.

Stole my SIL jacket in the middle of the reception-literally took it off her back- because one of the bridesmaids was cold (it was a night reception in the spring, the girl should’ve brought a jacket). The list goes on. Well they got divorced about a year later because apparently her demanding attitude carried over into the marriage.

Needless to say, the rest of my family had a little party when we heard about the divorce.”

“My cousin was married to one.

He comes from a very not wealthy area, and has become successful himself after moving out of his hometown. His wife was extremely wealthy, even could say excessively. They married after a year of knowing each other, and boy was it a surprise to hear about the wedding plans. They spent +250K on the wedding, including catering by 5-7 different restaurants.

Their food was from different cultures and cooked in front of you (think almost hibachi buffet style). They even had servers in tailed suits and white gloves serving taco bell after midnight once everyone was drunk. Once they got married, she was spending more money than he could make.

She was getting mad because he wasn’t making enough, while she wasn’t working and they hadn’t had kids. They got divorced, and she gave him the ultimatum of getting his ring back or keeping the dog. He kept the dog.

Her sister, a lawyer, helped her file a restraining order on him and they haven’t spoken since. F*ck her, but man did he dodge a bullet.”

Okay, ladies and gents, now we want to hear from you.

Have you ever had to deal with a big, bad Bridezilla before?