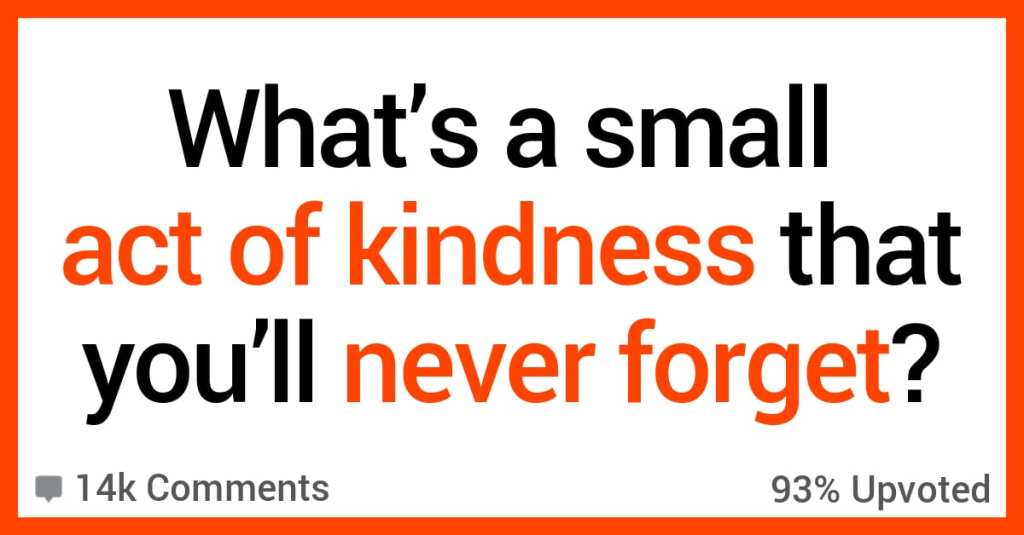 Every day the vast, vast, vast majority of us wake up and try to do the right thing. And sometimes, those good things we do make a big difference in other’s lives.

Maybe we don’t realize at the time and maybe we’ll never know… but if you put kindness out there… it’s bound to have outcomes like what you’re about to read.

For these 11 people, the small acts of kindness that others gave freely… well, it changed them forever.

At work I was complaining about heartburn once. I was still pretty new to the job. Didn’t really have any work friends. Felt like an outsider. My life outside of work was pretty s**t as well.

The bartender on shift overheard me and ran to a nearby coffee shop to get me a chocolate milk.

It definitely made the heartburn go away but it was such a needlessly kind act. I dont think ill ever forget it.

2 years later we’re still friends and she is definitely one of the kindest people I’ve ever met.

During the single most difficult time of my life, a stranger on reddit gifted me $500. To me, it was a fortune. I received it while at work and just broke down.

It started the change of my life and a few months later I was able to move, met my now-fiancé, had my son, and found my job.

I still message them once in a while to update them on my life and continue to thank them for their generosity, but I think they abandoned their account years ago.

Alternator died while I was driving home from university. Engine died as I exited the freeway in the middle of the night in a not-so-pleasant part of town in the days before cell phones.

As I’m pushing my car out of the intersection, a guy in a truck comes up and offers to push my car to my neighborhood a good three miles away.

He does so, and I’m pulling into my neighborhood, he simply gives a wave and drives off into the night.

I never even had a chance to thank him.

So, there was this one time in the 1990s. I was helping my brother move from a teaching job after college. This was in the middle of nowhere in the Upper Peninsula of Michigan. He was driving his little pickup truck pulling a trailer and I was driving my crappy little Ford station wagon, packed to the gills with his stuff.

It was a Sunday. I’m driving along and my car just dies. No warning, nothing. I coast to a stop on the side of a rural highway and wait for my brother to realize I wasn’t behind him anymore and turn around. After about 20 minutes, he finds me, the hood up and neither one of us knows very much about cars. Soon, though a man from the house we broke down in front of comes out, takes one look at the engine and says, “Timing belt.”

We inquire about getting the car towed the 30 miles to the closest large town and realize that it was going to be an expensive repair, even if the engine was OK and not ruined. This man, though, he takes on look at the situation — sees two broke kids in their early 20s just trying to get by in life and he says, “Well, it’s Sunday. Nothing’s gonna be open. I tell ya what. My next-door neighbor is a mechanic. Let’s push the car down to my driveway and we’ll see what we can do.”

So that is exactly what we do. His neighbor calls his buddy at the auto parts store (which is closed on a Sunday), who does a favor and gets the parts needed, drives them 30 miles out to the house and well sit around telling stories while the car gets fixed. This man’s son, a kid of about 9 or 10, is hanging around. He is extremely bored. There were no kids nearby his age, and he’s craving any kind of interaction, even with two guys in their 20s. The kid goes “Want to see my treehouse?” and points to the woods out back. My brother and I look at each other, shrug, and say, “Sure.”

We end up spending two hours with this kid, helping him build his treehouse. When we are done, we go back to the house and the car is all fixed. My brother and I have maybe $60 in cash on us (combined) and try to pay the man who did the work but he refused. He said, “No, you boys were in need of help and I wanted to help. You don’t need to pay me. Plus, you kept my son occupied for several hours, which I truly appreciate.”

He then says, “I want you to do something for me, though. The next time you see someone in need of help and you have the means, I want you to repay this favor.”

And that is one of the rules of life I live by, taught to me by a generous man in the middle of nowhere who helped me out when I was in a time of need.

When I was young(19) I lost my wallet and someone used my license to rack up tickets. It was pretty obvious once courts looked at the location of the tickets and what vehicle was used, the signature, that it wasn’t me. I had to go to around 3 courts clearing it up.

The 3rd judge was the only one with a problem. He said I had failures to appear since the tickets were ignored. I explained what was happening and how I’ve been dealing with this and I came in as soon as I was made aware of the issue.

He wanted to put me in jail because he didn’t trust I’d be back. He wouldn’t look at my paperwork because it was an arraignment. He would only look at it during the trial date. I didn’t know what to do, but I had the name of the public defender memorized. I asked if I could talk with her first.

He called her in and said, “this young man seems to know you…”

I quickly explained what was happening and showed her my evidence. She told the judge that if he didn’t release me to come back, she’d pay my bail out of her own pocket.

He scorned me but released me. I just had to return the next month during the trial date.

I was 19 then. Made a huge difference.

I have two moments that I’ll never forget.

When I was younger, my mum was depressed and we had very little money. It was either heating or eating a lot. An old lady around the corner from us would invite us over for tea sometimes or breakfast before school. She knitted me, my baby sister and my mum cardigans, socks and a blanket each one winter when it was really bad.

I was at a terrible time of my life at 17, had a bad day at work, and then my train home was 1 hour+ late. I just started crying at the train station and was really wondering if it was all worth it. A woman just held me for bit while I cried. She was a complete stranger, I’ve never seen her since but I needed her I guess. I think she saved my life that day.

I took my sister whose in a wheelchair to the cinema for the first time on my own.

At the end, I realized I couldn’t undo the brakes and was blocking everyone.

I felt like crying because I thought everyone was pissed at me, but some nice lady helped me, then took me and my sister out.

She said she once had a son who needed a wheelchair.

This was long ago but I’ll never forget.

I was out of a job at a time that I had to support my mother.

Finally landed one but I had to walk back and forth and I didn’t have any shoes that would hold up on the walk or the work.

Went to FB and mom asked around for some hand me downs we could buy from some one.

A day later a very kind man showed up with a brand new pair of really nice shoes he had just gone out and bought for me.

He left before I could even get any money for him.

Neighbors asked to borrow my truck. Told them I could not trust my truck because the tires were bad

Next day mr neighbor called and said he was getting new tires for his suburban and I could have his old ones. Told me to just show up at this certain tire shop and they would put them on

Get to tire shop and they put on brand new Goodyear tires. I asked what happened to the old tires I was suppose to receive.

Shop owner said the “old tires” was just a story to get me in the shop.

Mr neighbor bought me a full set of new tires instead of the old tires he said I could have.

Riding my bike on a long trip through Canada.

With about 50 miles to go, I had a major mechanical failure. Stuck on the side of the road in a foreign country within 5 minutes at least 10 cars had stopped to check on me.

One guy loaded my bike in the back of his truck and drove me 30 miles to the border where I could catch a ferry back to the US. Amazing kindness and generosity toward a stranger.

He just asked that I pay it forward and to date I’ve helped 5 cyclists who were broken down in honor of that promise.

I recorded a homemade album with my garage band in high school and handed out a few CDs.

A few weeks later my English teacher approached me with 5 pages of notes on what he liked and what I could improve on. He apparently got the CD from someone at the high school and listened to it all the way through (it was over an hour long).

He didn’t know I was the singer and guitar player until he asked the person who gave him the CD. He said that if I ever got a shot in a studio, I would create something amazing.

Thank you to all the teachers out there who believe in their students.

It makes all the difference to some of us.

Okay, I’m crying, and I’m happy to admit that. What a great collection of stories! Yay!!!!

Has anyone every done something for you and it make a huge difference?