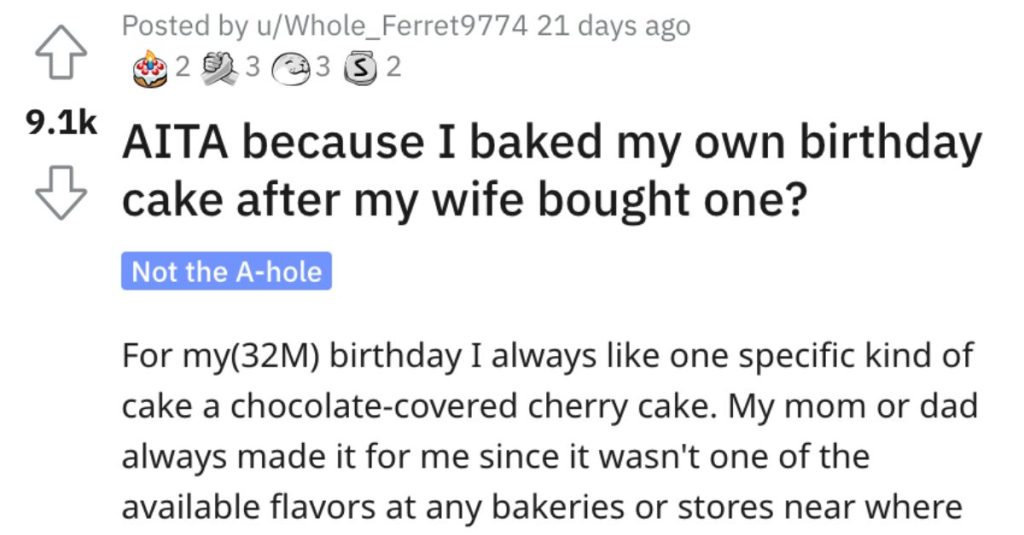 He Baked His Own Birthday Cake After His Wife Baked One for Him. Is He a Jerk?

That’s nice…but I think I’ll make my own.

And that brings us to today’s story!

Read on and see if you think this guy acted like an a**hole toward his wife on his birthday.

AITA because I baked my own birthday cake after my wife bought one?

“For my(32M) birthday I always like one specific kind of cake a chocolate-covered cherry cake. My mom or dad always made it for me since it wasn’t one of the available flavors at any bakeries or stores near where we grew up.

When I moved away I started to make it myself. I’ve been married to my wife just under a year but we’ve been together for 6 years so she knows all about this cake. During that time we’ve either baked it together, my parents made it, or I’ve made it on my own. I’ve never asked or expected her to do it.

Before my birthday this year my wife asked me what kind of cake I wanted. Same kind as always but she told me she didn’t feel like baking. I told her she didn’t need to worry about baking it because I can just do it myself. She asked me a second time and I gave her the same answer.

The day before my birthday I get home from work and have all the ingredients to make my cake. Go to get something out of the fridge and there’s a pair of cheesecakes in there with ‘Happy Birthday’ written between them both. I asked my wife about it and she said those were the cakes for my party the next day and she thought of switching things up this year since “everyone loves cheesecake”.

I don’t h**e it but she gets cheesecakes at least once a month. I only ever have the cherry cake on my birthday. I told her I appreciate it and they look good but I really want the cake I like so I was going to make mine and we’ll just let everyone have a choice of what cake they want.

She got p**sed off and yelled that I ruined her attempt to make things easier on us by not having to bake and bringing cake that everyone would love. It’s been two days since the party and she was cold at the party and is still acting cold. Usually I move mountains and heaven to give her the things she wants on her birthdays and celebrate how she wants, I just wanted one specific cake for mine.

One reader said he’s NTA and that they’re pretty confused by this situation.

Another individual made a good point: parties are never ruined by too much cake! 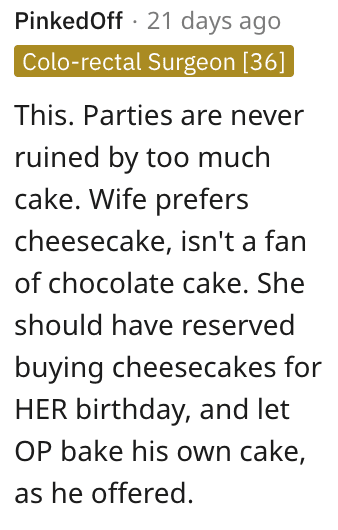 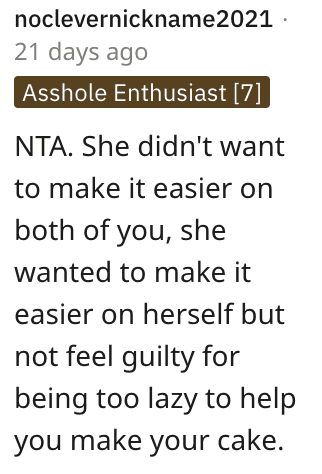