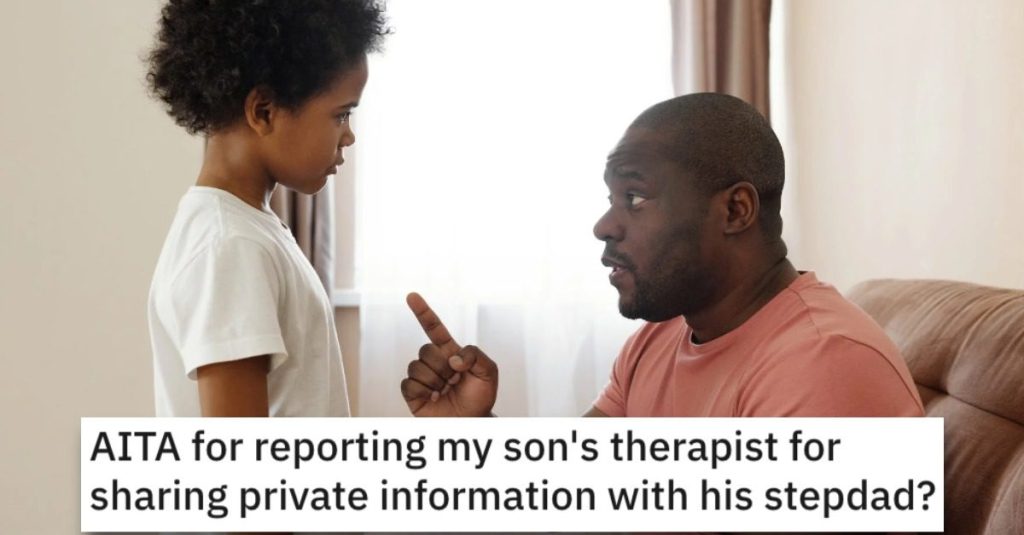 He Reported His Son’s Therapist Because He Shared Private Information With His Stepdad. Is He Wrong?

I’ve heard quite a few stories like this lately and I think it’s crazy!

But let’s get all the details before we jump to conclusions, okay?

AITA for reporting my son’s therapist for sharing private information with his stepdad?

“My m36 son’s (14) dog passed away recently. I signed him up with a therapist because his dog’s death has literally left him unable to speak. He’s been in therapy for 2 weeks now.

2 days ago, My son called crying saying his stepdad punished him by taking his bicycle and selling it for no reason. I was livid. I went to have a word with his stepdad and he told me that there WAS a reason and that is the fact that my son “badmouthed” him to the therapist, and claimed that he treated the dog poorly.

I was floored at this. I had an argument with him an asked how the hell he knew and told him to prove that my son said all that. He showed me texts betwen him and my son’s therapist. So basically…the therapist had been giving out private info about a bunch of stuff my son talked about in therapy. I was even more floored. I went straight to that therapist and we had a huge argument.

I told him I was going to report him after he defended himself saying the reason he gave my son’s stepdad this info was because of concern as “a parent”. I said that I don’t give a s**t what the justification was, and went on with my report. He tried to talk about how he felt for my son’s stepdad and his concerns as a “parent” so he didn’t think he did anything wrong.

My son’s mom called after she found out about the report and she she blew up at me on the phobe calling me a controlling a**hole for what I did. I ignored her calls after that but my own wife thought I made a hasty decision and that the real problem was with my son’s stepdad not the therapist.

Was I in the wrong for reporting him?”

Now let’s see what Reddit users had to say about what happened.

This person said he’s NTA and that this therapist needs to lose their license. 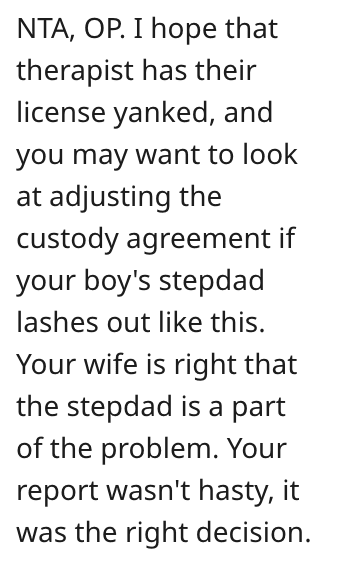 Another reader said the therapist needs to be sanctioned and that this kid is getting it from all directions.

And another Reddit user said they are worried about the man’s son and that he should try to get full custody of him.