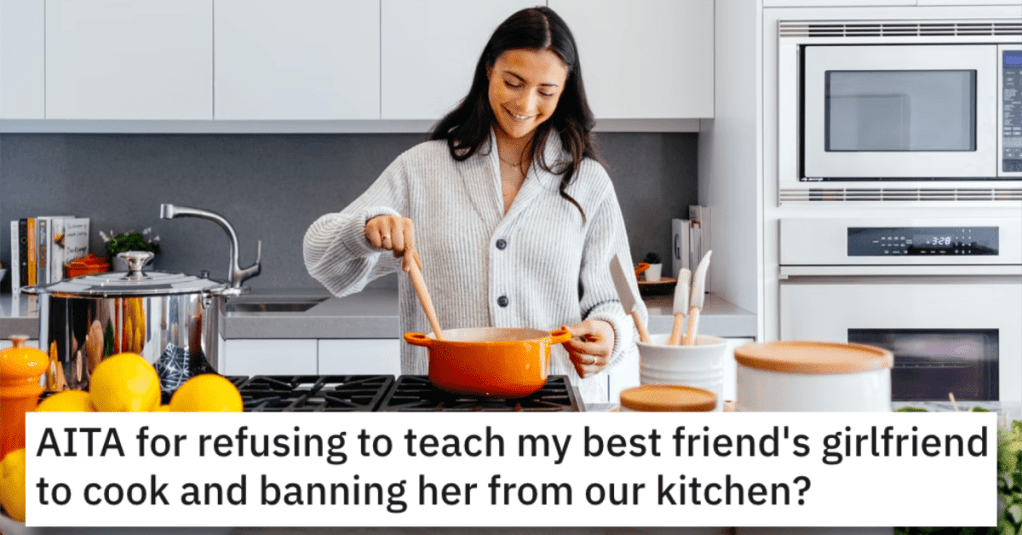 He Banned His Roommate’s Girlfriend From Cooking in Their Kitchen. Is He a Jerk?

When you have roommates and they have significant others, things can sometimes get…tricky.

I know I’ve been there before…

But I can’t say that I’ve ever had to ban someone from using my kitchen.

And that brings us to today’s story…read on to see what happened!

AITA for refusing to teach my best friend’s girlfriend to cook and banning her from our kitchen?

“I (26M) live with my best friend Bryan (26M) in a rented house. Sometime in September Bryan started dating Cindy (24? I think).

Bryan can’t cook. At all. He can make scrambled eggs, instant ramen, frozen pizza and that’s about it. He doesn’t even know how to cook rice. I on the other hand am a great cook and I occasionally (3-5 times a month) cook for him as well.

Cindy has been staying over more and more often and few weeks ago she was sleeping over on the same day I cooked for Bryan.

She was apparently really shocked I cooked it because it “tastes like it’s from a pricey restaurant”.

Bryan made the mistake of mentioning that I offered to teach him to cook. Cindy decided that this offer automatically extends to her as well.

She came to me and told me I can teach her. She didn’t ask, she just told me.

I told her I wouldn’t, we went back and forth she thinks I have to because I promised Bryan I’d teach him but he doesn’t want to.

(Cindy also doesn’t know how to cook anything.)

She thinks she is entitled to cooking lessons because she is dating my friend.

She kept pestering me about this for almost three f**king weeks and only stopped when I asked Bryan to talk to her.

Now last week I got home and could immediately smell burnt food.

I walked into the kitchen and there she was. She tried to make crepes, burned them to a crisp and was scraping them with METAL spatula on the nonstick pancake pan!!

I slightly lost it and immediately raised by voice to ask her what the f**k she was doing.

She gave me an attitude about how since I’m an a**hole she’s learning to cook by herself.

I told her she can do that at her home and not in our kitchen.

She smugly told me it’s not my decision to make because it’s Bryan’s place as well.

I told her it is my decision because everything in the kitchen is mine.

(When we moved in the kitchen was empty apart from a single banged up pan, one pot and three dull knives with s**tty plastic handles. The kitchen is now chef worthy, I dropped hundreds on appliances, cookware, nice dinnerware etc.. Bryan is of course allowed to use everything in the kitchen. )

I told Cindy that she is not allowed to cook anything in our kitchen.

Bryan came into the kitchen at this point and diffused the argument.

That was last week.

Things between Bryan and me are very awkward, Cindy has not been over yet. One of my friends absolutely went off on me, calling me s**ist and classist because “not everyone has the same opportunities”.

(side note : I grew up poor. I learned to cook on my own. I learned how to make great tasting meals out of ramen, hotdogs, rice, whatever was on clearance etc.)

I don’t think I am the a**hole for refusing to teach but I am wondering if banning her from the kitchen was a step too far.

It’s just that I really don’t like her and honestly don’t trust her not to damage something on purpose.”

Now check out how Reddit users reacted to this story.

One reader said that this Cindy character sounds pretty entitled. 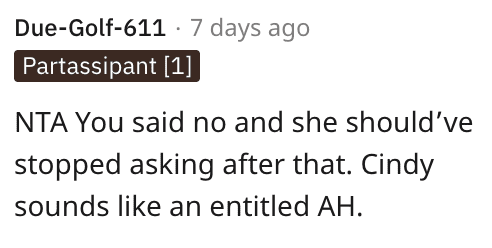 And another individual argued that the friend who called OP out doesn’t know what they’re talking about. 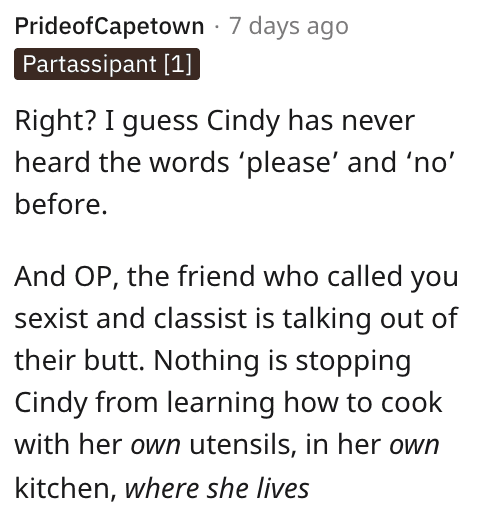 And another reader said that she wouldn’t take no for an answer and then the whole thing was turned around on OP. 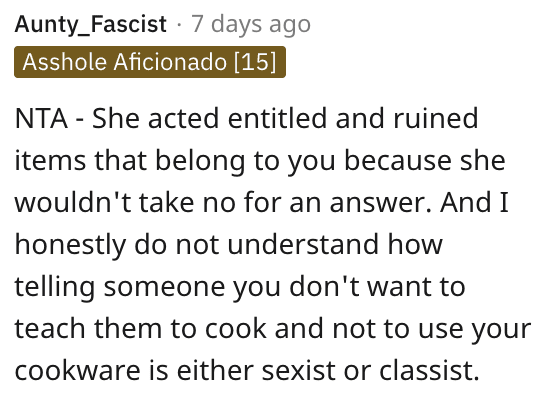