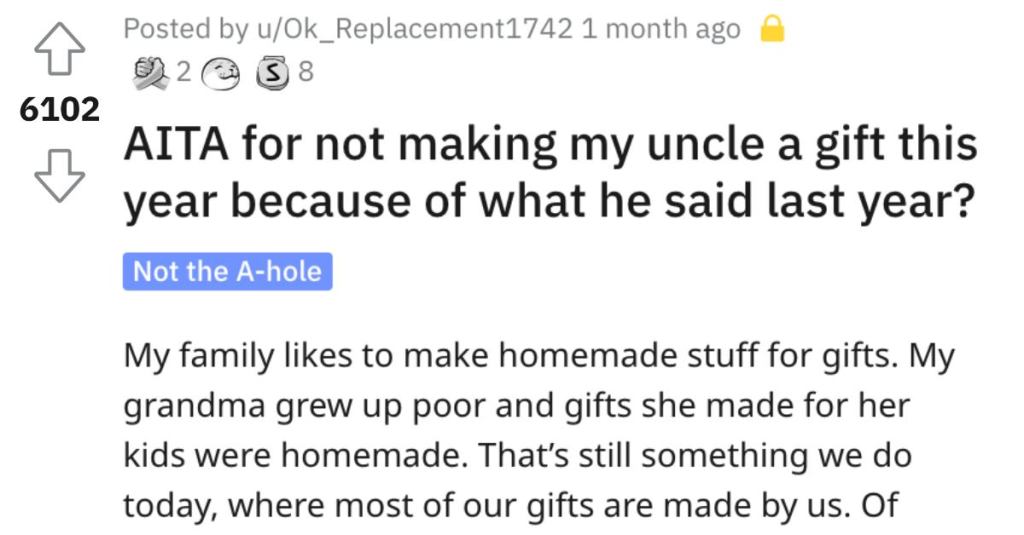 He Didn’t Make His Uncle a Gift Because of What He Said. Is He a Jerk?

Have you ever gotten so mad at someone that you said something like this?

Well, a teenager got so fed up with his uncle that he decided not to make him something handmade for the holidays…and now he wants to know if he overreacted.

AITA for not making my uncle a gift this year because of what he said last year?

“My family likes to make homemade stuff for gifts. My grandma grew up poor and gifts she made for her kids were homemade.

That’s still something we do today, where most of our gifts are made by us. Of course, if someone wants something specific, someone will buy it. The thing I (16m) make is bracelets. My grandma makes blankets, my mom makes necklaces, and my aunt Morgan (40f) makes custom t-shirts

I am very close with my aunt Morgan, and she helped raise me until I was about 10. I often sleep over at her house to babysit her kids, Eva and Eli (twins, 8m&f) but I make it a point to avoid her husband, my uncle Dylan (48m) because I don’t get along very well with him, and we don’t have any sort of bond.

Last Christmas I, as usual, made bracelets for everyone. This was Dylan’s first Christmas with my grandmas (he usually spends it at his moms with his family without Morgan and the twins) and I made him a gold & silver bracelet with the coils twisting around each other. All my money last christmas was babysitting money, and I worked extra to be able to give Dylan something I thought he’d like.

Well I give it to him and he thinks it’s a joke. When I explain Im 100% serious he says he doesn’t wear “gay s**t like this.” Im gay, and he knows this, I’ve been out for 3 years. He told me to get a watch next year. Well, I didn’t get him anything this year.

We did Christmas early this year (today, the 19th) because my other uncle Ben has to leave the states for his job a few days before christmas.

I also got a job this year and was able to afford Morgan a ring similar to one she bought on her 18th birthday but had lost a few years ago on a vacation (I knew it wouldn’t replace her old ring, but I thought she’d be happy to have one similar) . I had been saving up slowly for 3 years now, my new job really helping.

Anyways we gave out gifts and I delivered Morgan’s gift last because she was sitting farthest from the tree. I give it to her, it’s a bracelet with a ladybug charm, and the ring. She cried happy tears when she saw the ring, so I think it was a success 🙂

My uncle Dylan then asked where his watch was. I said I didn’t get him one because he insulted my gift last year. He sulked and ranted to my uncle Ben about it (I make Ben a pretty simple bracelet when he visits, per his request) and Ben called him a ‘d**kless ingrate’ because of what Dylan said last year.

Dylan sulked the rest of the night and my very sweet grandma suggested I make him a simple bracelet or give him a cheap watch next year, which I’ll probably do. I’m just upset that Dylan thought he was entitled to a watch from me after a rude comment last year, but I do feel bad for leaving him out.

AITA for not giving my uncle a gift this year?”

Now see what Reddit users had to say about this.

This reader said that this kid knows what they have to do for next year…I agree!

And this person piled on with this idea and took it even further. 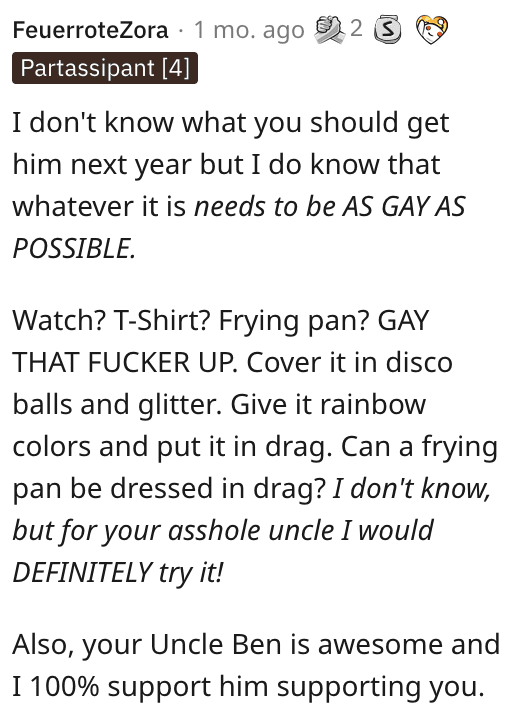 This Reddit user said that this kid’s uncle needs to get over himself. Seriously. 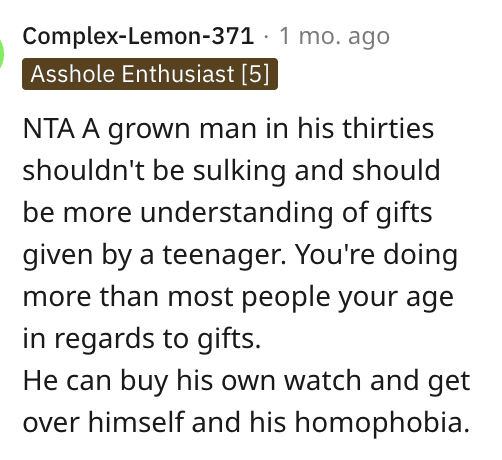