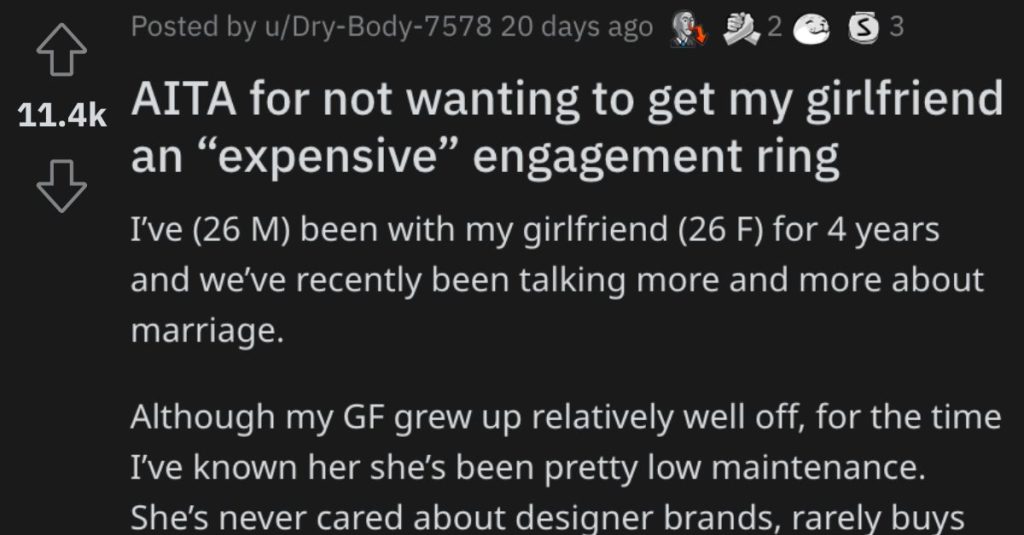 He Doesn’t Want to Get His Girlfriend an Expensive Engagement Ring. Is He a Jerk?

Uh oh, I think some people are gonna have major feelings about this story…

And I think you’ll be happy to know that the battle over how much to spend on an engagement rages on!

So read this story from Reddit’s “Am I the A**hole?” page and see if you think this guy is, well, an a**hole.

AITA for not wanting to get my girlfriend an “expensive” engagement ring?

“I’ve (26 M) been with my girlfriend (26 F) for 4 years and we’ve recently been talking more and more about marriage.

Although my GF grew up relatively well off, for the time I’ve known her she’s been pretty low maintenance. She’s never cared about designer brands, rarely buys new clothes, and the jewelry she owns was gifted to her. I have a decent job now (80k a year) and I’ve been saving for awhile, but growing up my family didn’t have a lot of money.

My GF and I have always seemed to be on the same page when it comes to saving money. I assumed she would be fine with a more affordable ring. When I started looking into rings, I discovered moissanite rings, which look similar to diamond rings but are much more affordable. I was looking at rings in the 1500 -1800 range.

When I mentioned this to her she insisted she wanted a real diamond ring and sent me links to a bunch of diamond rings that she liked. The prices ranged from 6,500-10,000. I told her that I wasn’t willing to spend that much. She seemed genuinely mad and said it wasn’t “that expensive” We got in a pretty big argument over it.

I told her that it was ridiculous to ask me to spend that much and that I thought she was more reasonable than that. She said I was being cheap and that I could afford it and that I was basically saying she wasn’t worth it. I told her no one is worth a 10,000 ring…

Eventually my GF said she didn’t care and that I should get whatever ring I want but she’s clearly still mad and I know this is going to be a an ongoing argument. I’m a bit frustrated because this seems out of left field. I’ve always known marriage is super important to her but I didn’t realize she’d insist on a diamond ring.

So I talked to my older sister about it, who despite agreeing diamond rings were stupidly priced, sided with my GF and said if I could afford it, she didn’t see the big deal. She added that my GF has done “so much” for me and I was being an a**hole about this.

What my sister means by my GF “doing so much for me” is that she was really supportive when I was in a serious car accident 4 years ago. I broke multiple bones and required a few surgeries. Although where I live most healthcare is covered, I was unable to work for awhile and had expenses I wasn’t able to pay.

I had been dating my GF for only 6 months at the time and she was really there for me. I couldn’t pay my rent so she let me move in with her for free and helped pay for a few expenses and for physical therapy I needed. She also helped me get a job with her uncle who was the VP of an insurance company (It was an entry level position and I had a business degree so it’s not like I was unqualified).

Obviously I’ve thanked her for all she did for me but it’s not something we talk about much. I don’t think I’m obligated to buy an expensive ring because she helped me out a few years ago. But if my own sister said this I’m guessing my GF must feel the way as well.

This reader said that this guy is kind of an a**hole and that he needs to reframe the way he’s looking at this whole situation. 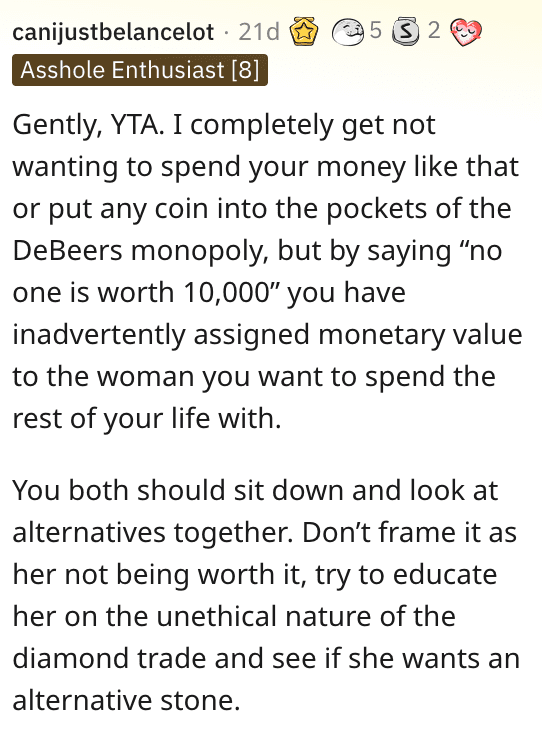 And this Reddit user said that this fella is using the “blood diamond” argument to make his girlfriend agree with him. 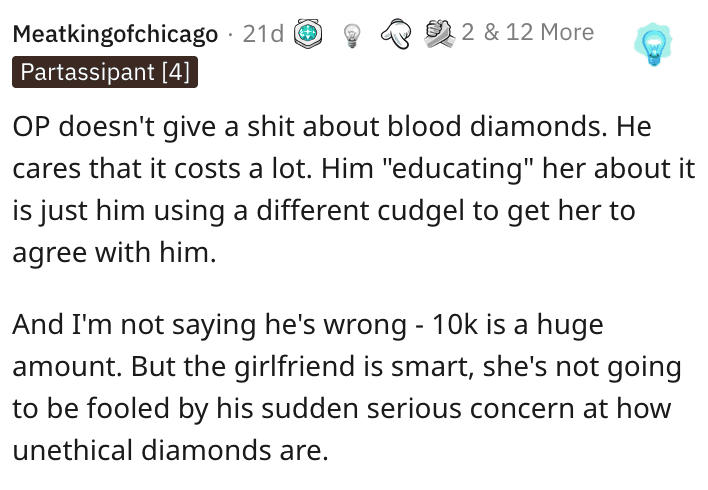 Another individual said that just because he doesn’t agree with the price of expensive rings doesn’t mean it’s not important to the person he’s going to marry. 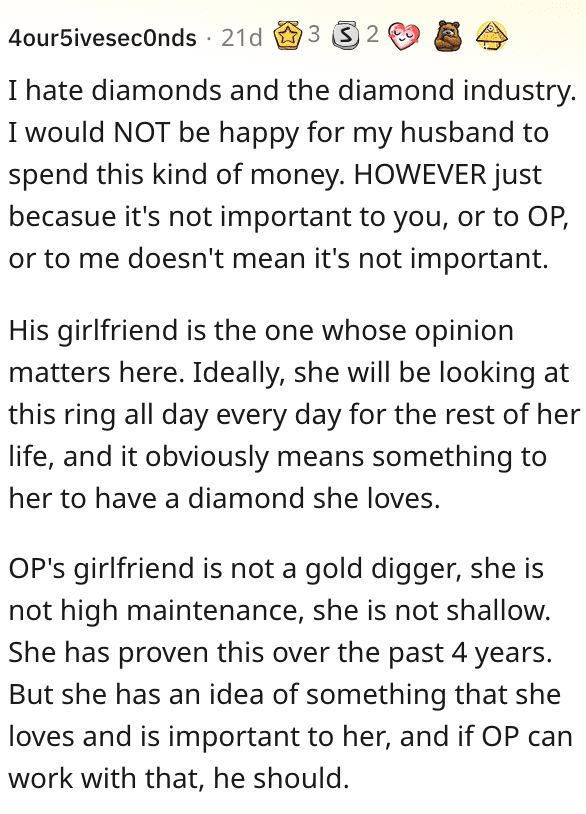 And this reader said that it sounds like these two really need to talk about finances before they get married. 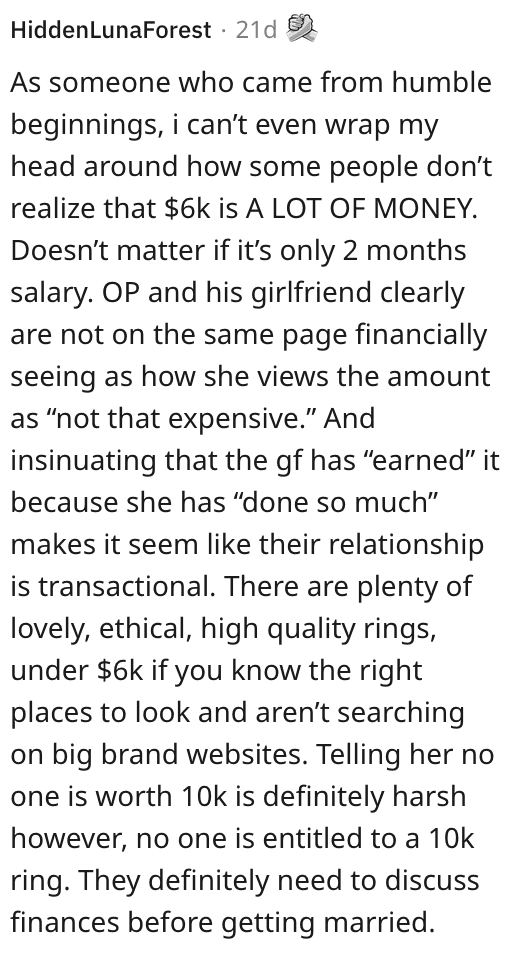 Sound off in the comments and share your opinion.