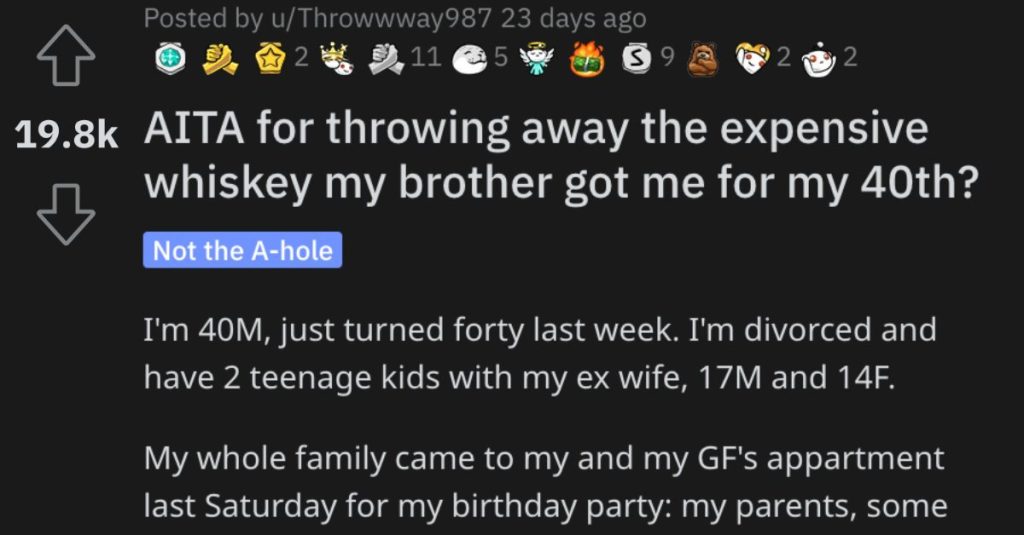 He Threw Away the Expensive Whiskey His Brother Got Him. Is He a Jerk?

Don’t throw that stuff away!

Send it over here!

I totally understand not wanting to have booze in your house or anywhere around you, but is it rude to throw away expensive whiskey that was a gift?

Check out this guy’s story and see what you think.

AITA for throwing away the expensive whiskey my brother got me for my 40th?

My whole family came to my and my GF’s apartment last Saturday for my birthday party: my parents, some aunts and uncles, some cousins, my 3 brothers with their families, my two kids (and my GF’s 15yro son who lives with us).

I am a recovered al**holic, I’ve been sober for 6 years now. Al**hol absolutely ruined my life, it destroyed my marriage and nuked my relationship with my kids for years. I don’t allow al**hol in my home now, for anyone. It just isn’t served or tolerated here. My entire family knows this very well, as they know my entire history with al**hol.

For my 40th, my brother bought me a very expensive bottle of whiskey, it had writing on it, a very heavy bottle and very old whiskey, so it probably cost him a couple hundred bucks.

When he gave me the bottle, I was shocked, and said I don’t drink, but thanks for the gift. He then opened the bottle and started pouring shots in plastic cups for everyone.

My daughter had a panic attack at the smell of the al**hol (which I am painfully aware is my fault and I will never forgive myself for it), so I told my brother to take the al**hol out on the balcony and just leave it there. He wouldn’t do it, and took a shot of the whiskey.

I told him to seriously stop it and he proceeded to pour the whiskey. He then said I am acting like a sober saint now, when I ruined everyone’s birthdays for years with my drinking. I told him to come to the hallway with me and talk it out. He refused and put a glass of whiskey in my hand.

My brother then stormed off and my mom followed him. She later called me, demanding an apology for disrespecting my brother like that. My dad said I was being overly sensitive, and some of my other family members also agree.

Now check out what Reddit users had to say.

One person said he’s NTA and that his brother was out of line. 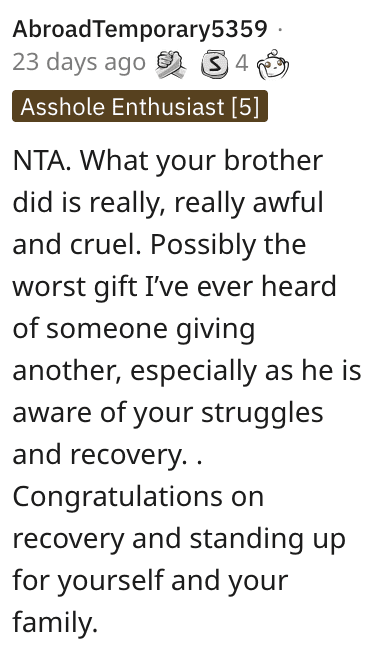 Another reader said they can’t believe the rest of the family is supporting the brother on this one. 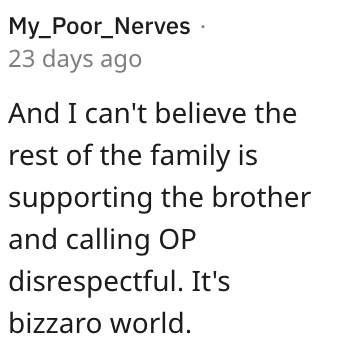 And this individual said there’s no way this guy is the a**hole. 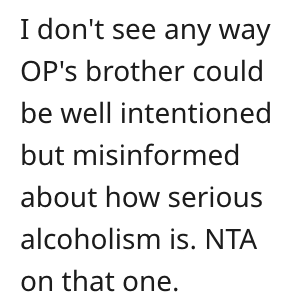