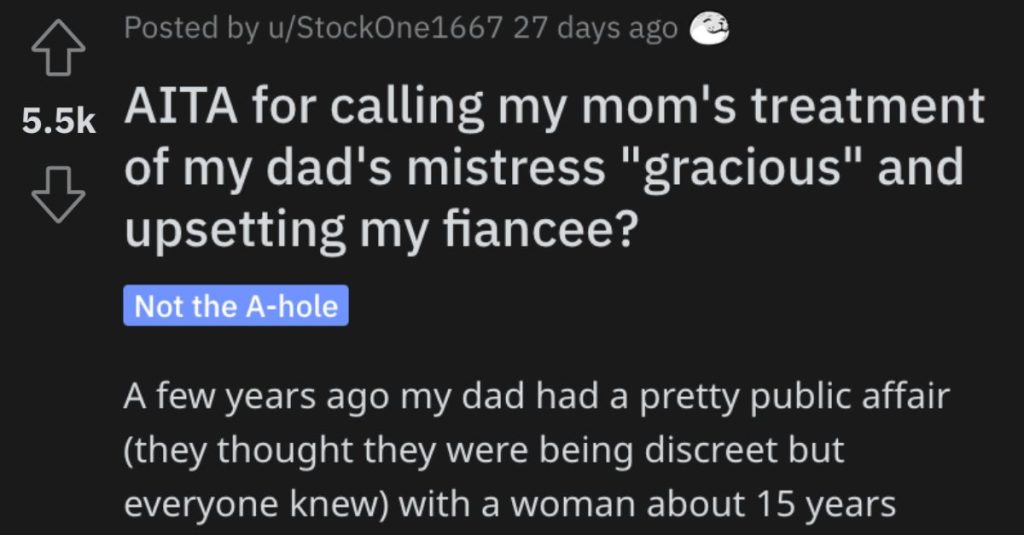 He Upset His Fiancée by What He Said About His Dad’s Mistress. Did He Go Too Far?

But before we jump to conclusions and condemn this man, let’s get all the details, shall we?

Read on to see what happened in this story from Reddit’s “Am I the A**hole?” page.

AITA for calling my mom’s treatment of my dad’s mistress “gracious” and upsetting my fiancee?

“A few years ago my dad had a pretty public affair (they thought they were being discreet but everyone knew) with a woman about 15 years younger than him. My father was up until this point a very stoic unemotional person and this was totally out of character, and everyone was talking about it. He ended up leaving my mom for her.

My mom was totally ice cold during all of this and even as her son I can’t gauge if it hurt her or not. She had zero reaction. She’s never said anything bad about him. Even when I tried getting her to open up she just wouldn’t (but this is around the time I began dating my fiancee and she doesn’t like her and began to ice me out as well)

My dad married his affair partner recently, and I proposed to my fiancee. We had an engagement party and it was probably the first time we were all together. MIL and her friends h**e my dad and his fiancee, because I think they worry about their husbands getting ideas.

MIL made a snarky comment about how when men leave for a younger woman isn’t she supposed to be prettier, and my dad might have done it wrong because my mom is much more attractive. All of her friends laughed and my dad’s wife looked like she was d**ng inside.

My mom told my MIL to stop and she doesn’t like women who pit women against each other, and said his wife is beautiful. When we walked away, I told my mom that was very gracious and I was proud of her. I wasn’t even talking to my fiancee but she lost it.

She said I was gross for praising my mom for being gracious when she should be being a “petty b**ch” She said I was an affair apologist and it made her nervous, and that I should have been laughing at her mom’s comment.

My mom called my fiancee an idiot and walked away. my fiancee is still upset I used that words and keeps saying it was s**ist and 1950s but can’t really explain.”

Take a look at what AskReddit users said about this.

One reader said he’s NTA and that they should all be following his mom’s lead in this situation. 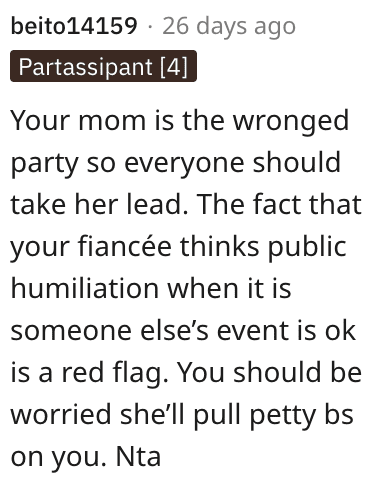 And another individual agreed and said the mom is acting mature and the rest of the people in this story definitely ARE NOT. 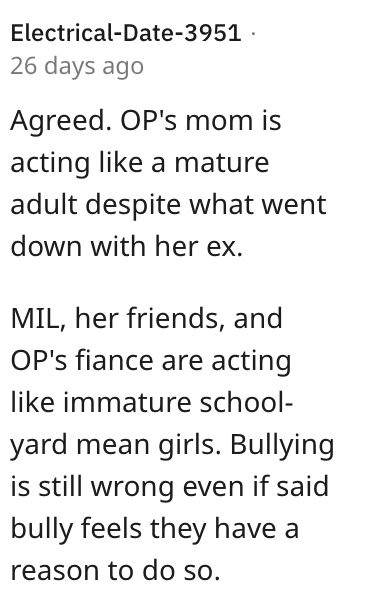 And this individual said that this guy’s partner and her mom need to apologize for how they acted. 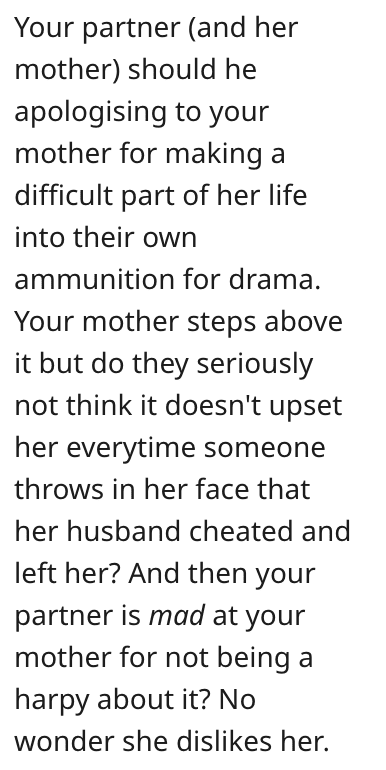