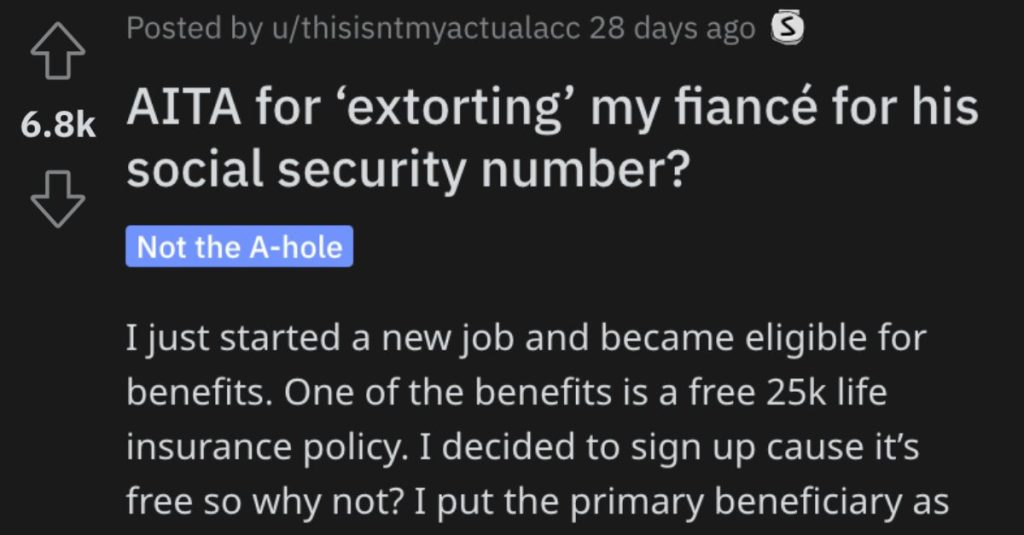 Her Fiancée Is Accusing Her of Extorting Him for His Social Security Number. Is She Acting Like a Jerk?

Extortion is no joke, my friends…

But is that what’s really going on here, or is the guy in this story just overreacting and being a drama queen?

Check out this story and see if you think this woman is out of line.

AITA for ‘extorting’ my fiancé for his social security number?

“I just started a new job and became eligible for benefits. One of the benefits is a free 25k life insurance policy.

I decided to sign up cause it’s free so why not? I put the primary beneficiary as my dad and the secondary as my fiancée, if it pays out it would pay out 50-50. They needed the beneficiaries info, name, date of birth, contact information, and it asked for social security number too. I called my dad, told him what I was doing, he gave me the info and that was that. I called my fiancée and asked him and he immediately got defensive.

“Why do you need that, what is this for?!” Valid question, but I had told him at the beginning it was so he could be a beneficiary to my life insurance policy. This isn’t some scam website, it’s through our HR health benefits. He refused to give it to me and was getting angrier and more upset the more I pushed for it until finally I gave up and just didn’t add him because it wouldn’t let me add him cause the SSN was a required field.

When we got home I asked him what the big deal was and he basically said that information is his information and he’s not giving it to me. I pointed out to him that since we’re getting married I will at some point likely need his social. I pointed out he wanted to be added to my insurance after we got married (his job doesnt offer any) and that I would definitely need his SSN for that, bank accounts, mortgages, credit cards??

I’m not posting it on the internet, it’s so he can get money in the event I d**. Anyway long story short we argued, he’s adamant his information is his information and he doesn’t want to be in ‘the system’. I reminded him he was in the military ffs he is already in the system!!

Finally I told him okay, then I won’t add you to my life insurance or health benefits because I can’t add you without that information. He responded saying that I was ‘extorting’ and ‘blackmailing’ him and then he left for his brother’s.

One reader found it funny that this guy doesn’t want to be “in the system.” 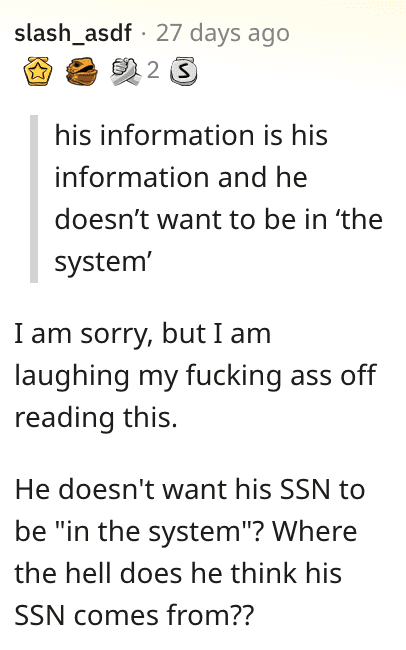 And another Reddit user said his behavior raises some red flags… 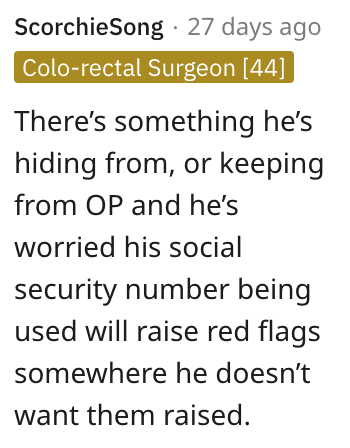 And this individual said she’s NTA and that she should run a background check on this guy before she marries him. 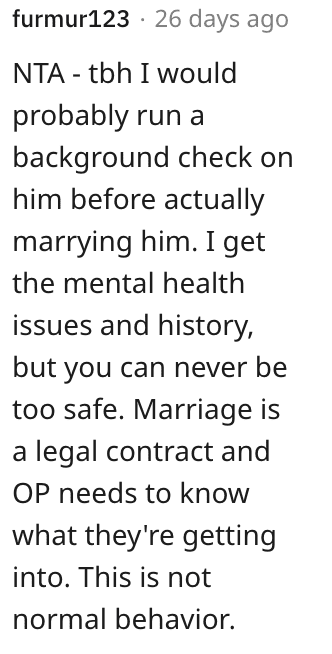