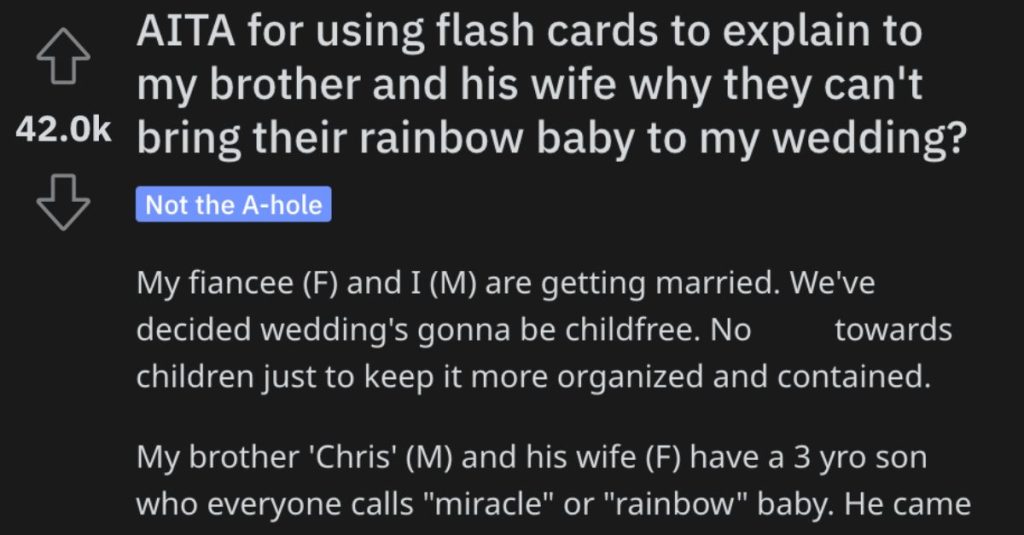 He Used Flash Cards to Explain to His Brother Why He Can’t Bring His Child to His Wedding. Is He a Jerk?

Unless you’re using flash cards to teach someone Spanish vocabulary or something like that, you’re probably going to look like an a**hole…

But hey, that’s just my opinion!

Let’s get all the details before we make a call on this one, okay?

Read on below to see what happened!

AITA for using flash cards to explain to my brother and his wife why they can’t bring their rainbow baby to my wedding?

“My fiancee (F) and I (M) are getting married. We’ve decided wedding’s gonna be childfree. No h**e towards children just to keep it more organized and contained.

My brother ‘Chris’ (M) and his wife (F) have a 3 yro son who everyone calls “miracle” or “rainbow” baby. He came after several failed pregnancies that lasted for years.

When they found out that my nephew was included in the no children rule; they tried to convince me to make an exception for him. Chris told me his son is a miracle baby and his presence at the wedding will bring “blessings” for me and my fiancee. I refused and said no, the wedding is childfree. His wife kept sending my fiancee pics of my nephew when he was months old (what that mean??). I told them no, and to stop.

My brother told me this might cause a rift in our relationship, I again said no and explained that the wedding is childfree. He asked again and pointed out how his baby is different since he’s a rainbow, a miracle baby.

The wedding (with a sticker of bride and groom).

Is Child (with a sticker of a baby).

They both were stunned. I asked if they get it now and Chris had lost his s**t. His wife had already grabbed her stuff and walked out. Chris called me an a**hole for doing this and said that I disrespected him, his wife and their son who’s my one and only nephew. He rushed out after we argued.

My fiance saw the whole thing and thought that it was funny but my parents and Chris are livid beyond measure. They’re telling everyone about the amount of disrespect and mockery I had displayed towards them and I’m being told to “fix it” now.”

One reader said that she is NTA. At all. 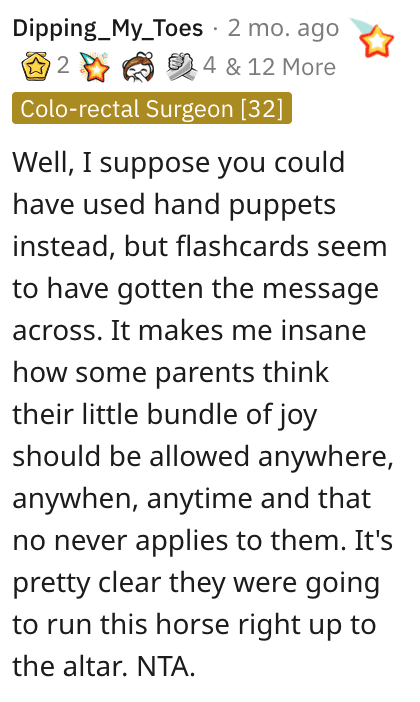 Another person also said she is NTA and said that every child that is born is a miracle.

And this individual said she’s NTA and added…Good Grief! 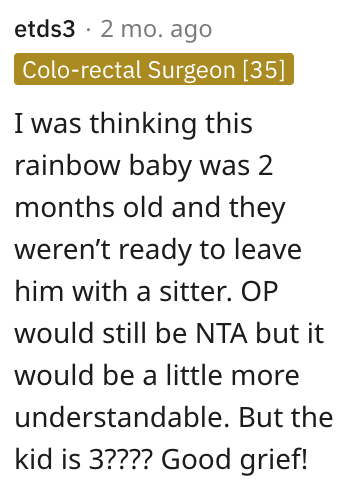