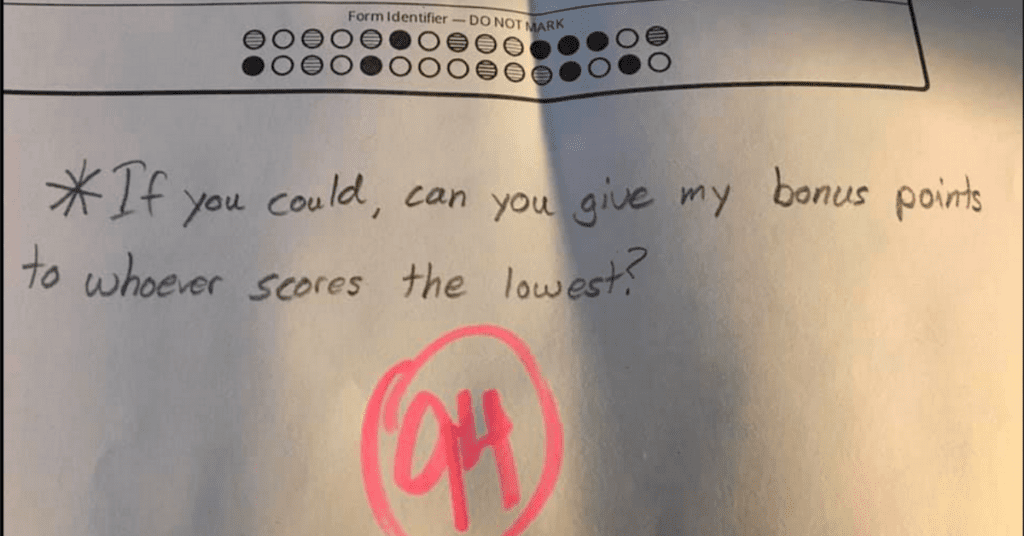 It’s easy to look around at the world and feel disheartened.

Too often we hear stories of bullying, of all the ways that people take advantage of the less fortunate, of cruelty, and just the unfairness of life in general.

So when one student stood up for kindness in their classroom, it went viral because we all needed a shot of hope right in the arm.

An A student made a simple request at the bottom of his test–to give the bonus points he knew he’d earned away.

This was definitely A+ behavior, and a lot of people on Facebook weighed in.

Most were very moved by the gesture. 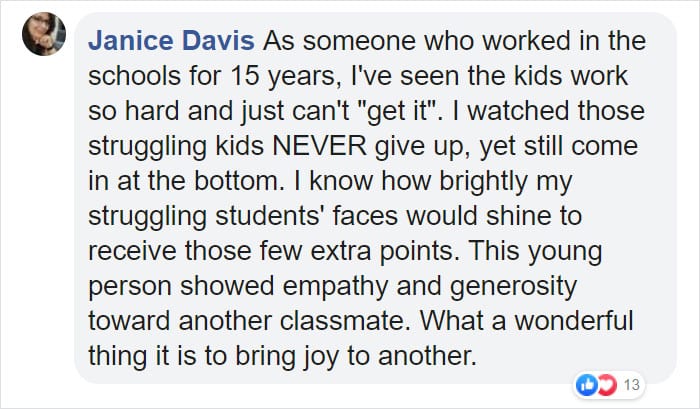 They showered the student with praise.

As with any viral post, of course, there were plenty of party poopers available to share their opinions about how such a sweet gesture would be the downfall of society. The nay-sayers just couldn’t see that sometimes there are greater lessons at stake than the one being scored on the test.

But most of the negativity was combated by those who saw the true goodness of the gesture, and the benefits that could go beyond one score on one day. In fact, some even went out of their way to explain why one test isn’t the sole judge of a student’s ability or preparedness.

The polarizing nature of the commentary shows that Mr. Lee had a lot to consider when he was grading those tests. Including this gal’s thoughts.

How did it turn out in the end?

At least one commenter asked the same thing.

Was Mr. Lee concerned that the student wouldn’t learn enough about the history of WWII?

Not at all. He saw the bigger picture, as he told Good Morning America:

“Not all are great test takers or in a comfortable situation at home that allows them to focus on studying,” Lee said, noting that Letcher County is a Title 1 school and some of the kids live in low income households. “I feel really great that it helped this student from 58 points to passing. We don’t know what her situation may have been.”

That day, Mr. Lee honored his student’s request to help a less fortunate classmate, and he taught a bigger lesson: sometimes, we all need a helping hand.

I think it’s really wonderful that this teacher didn’t hold hard and fast to some notion that a few bonus points would unfairly advantage the failing student. Where do you stand? Tell us in the comments.