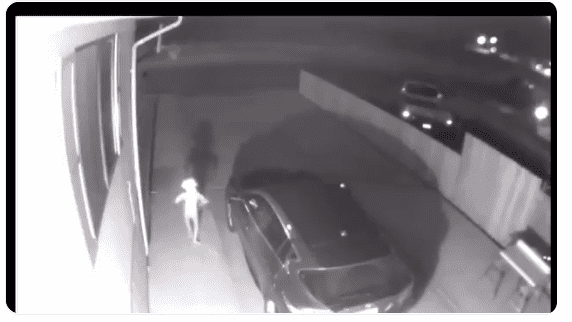 Y’all, this is weird. Or a brilliant hoax.

It all started with Vivian Gomez. She posted feed from her home security camera on Facebook. Clearly, the internet can’t get enough of this video, as people have watched it more than 16 million times.

The video shows a weird creature walking out from behind the camera, doing some combination of waddling and the chicken dance.

Twitter user @jadynbee_ posted the video and asked Twitterverse what they thought of the clip.

a lady posted this and said she saw this on her home camera this morning. what y’all think this is ? pic.twitter.com/L98wckn6bO

Some focused on the car:

I have one, can confirm. The back window is unmistakable.

is that the alien from Mac & Me pic.twitter.com/YA6DIgJKx4

Other saw something a little closer to home:

Sadly, the most likely explanation is this one:

If you look at it closely, it looks like a normal kid wearing shorts on his head in only underwear ?

Some people took issue with this explanation, but I think it’s the best one:

ive never seen a normal kid with legs like that

What do you think? Is it Dobby? An alien? A kid with unusual legs?