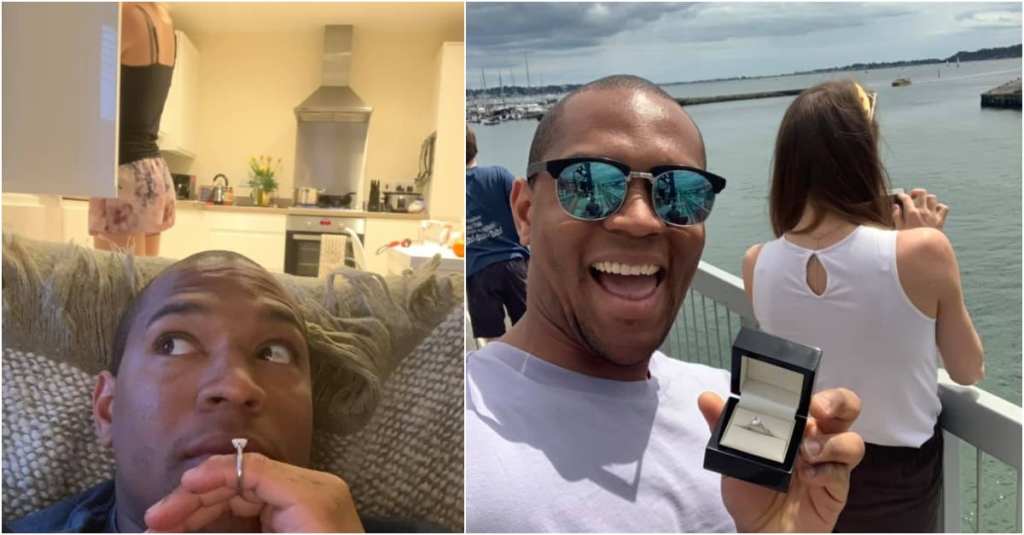 This guy right here has some GUTS.

Edi Okoro decided to pop the big question to his girlfriend Cally, buuuuuttttt…before he actually asked his lady for her hand in marriage, he decided he had to have some fun first.

Okoro decided he would see how close he could dangle the engagement ring in front of Cally and, luckily for us, he decided to document the whole fun game on Facebook. Here’s Okoro’s post explaining the fun he had on Facebook.

“I can finally put this out there … So this was how I proposed to Cally, the other story!

Those who have gone through this (and those who will soon find out) you want to propose in a way that speaks to you as a person and couple. Some plan a flash mob, a fancy meal, or even arrange a marry me sign. I couldn’t do this because “Edi doesn’t plan” …. I’m a spontaneous improviser!

This made it even more of a challenge because Cally knows this, and the moment I planned a holiday or meal she would have clocked on to what I was about to do.

Because of this I took the ring with me everywhere hoping the “moment” would arise in line with my spontaneous style.

After a month or so of waiting for the right moment, I was sitting on the sofa admiring “my precious” (yes I became very attached to this ring by this point) Cally almost caught me staring at the ring, and it hit me!….All these missed opportunities mixed in with the thought – Cally doesn’t know I have the ring!! I should just start documenting these moments!

This escalated quickly into trying to get as many photos of Cally with the ring without her knowing!…. yes she had no idea what I was doing in these photos!!!

The idea was to take as many photos, in more daring scenarios, until I found the perfect moment to propose, or until I got caught, at which point I would propose!

Here are some of the photos I captured over the space of about a month before I found the right moment (this is a story in its own right). “

Now let’s get to the pics!

1. You are playing with fire, sir.

2. Imagine the consequences if you get caught…or you lose it…

3. Right in front of her eyes and she has no idea.

4. Behind her back FOR THE WIN!

5. A taste while she’s taking a snooze.

6. I can’t imagine her reaction when she finally sees all of these. Must’ve been classic.

9. WOW. Now you’re taking it to the extreme.

And at least we can all have a laugh about it together! Best wishes Edi and Cally!

By the way… Cally… when you find out your pregnant… you know what to do to Edi.