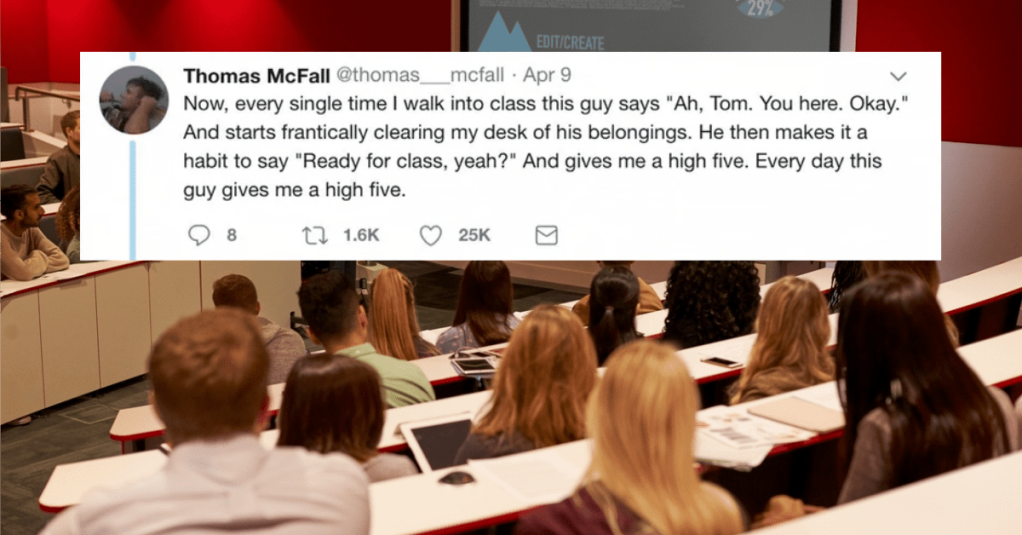 It’s no secret that we can all get caught up in our own lives and our own crap sometimes, forgetting that everyone else in the world is also navigating their own daily nonsense in exactly the same way.

It’s selfish, sure, but it’s also human – so we can all use the reminder that student Thomas McFall gives in this viral tweet thread about how his selfish take on a situation almost made him miss out on a pretty cool friendship.

It begins with the preface that McFall is taking a class, and every day he sits in the same seat.

Next to him is “some foreign guy” who, without fail, stacks all of his things on “McFall’s” desk until he gets there.

barely speaks English. The most advanced thing I've heard this guy say in English is "Wow, my muffin is really good".

This guy also has a habit of stacking every item he owns in the exact space I sit. His bag, his food, his books, and his phone are ALWAYS right on my desk space.

When he sees Thomas, the guy clears off his things and then gives him a high-five, and McFall really hated going through the same rigamarole before every single class.

He thought, why not just leave the desk clean and save us the trouble?

I was ALWAYS annoyed with this guy. I'm thinking "Dude, you know I sit in this seat every day. Why are you always stacking your shit here? And the last thing I want to do is give a guy who barely speaks my language high fives at 8 in the morning"

Just get your shit off my desk

One day, though Thomas was running just a bit late because he had stopped outside the door to check his phone.

What he learned when someone else tried to sit in “his” chair was that the man next to him – the high-fiver – was actually saving that seat for him every single day.

As I'm standing there on my phone another guy who was also late walks into the class before me and tried to take my seat since it's closest to the door.

The guy sitting next to me stops this dude from sitting down and says "I'm sorry. My good friend Thomas sits here."

He was touched, and a little ashamed that he hadn’t bothered to think of the other man as a friend, as well.

It was then that I realized this guy wasn't putting stuff on my seat to annoy me. He was saving me the seat every morning.

And this whole time he saw me as a friend but I was too busy thinking about myself to take him into consideration.

Cheesy as it sounds, I was touched.

In the interest of righting wrongs, McFall did the high-five and, after class, asked the other man if he wanted to come to lunch.

He learned that his new friend was in America from overseas and sent all of his money home to his wife and children while he earned his degree.

The guy moved here from the Middle East to pursue a college education in America. He plans to go back after he gets his degree. He's got two kids and a wife. He works full time and sends his all his left over money back home to his wife.

Tom bought lunch, figuring that the lesson the other man had taught him was worth a lot more than a couple of sandwiches.

I asked him how he liked America as well. He said he misses his family but it's exciting to be here. He also said "Not every American is nice to me like you are, Tom."

I bought lunch, of course. Dude deserves it. He gave me a high five for buying lunch. Gotta keep up tradition.

Moral of the story? Don't do what I do and constantly only think about yourself. It took me nearly the entire semester to get my head out of my ass and realize this guy was just trying to be my friend. Better late than never I suppose.

What I love the most about this story isn’t necessarily that the man was saving the desk for his friend, but that McFall very quickly and humbly not only learned his lesson, but went out of his way to correct his mistake, too.

Has a virtual stranger ever taught you something valuable about the world or yourself? Tell us what it was in the comments!