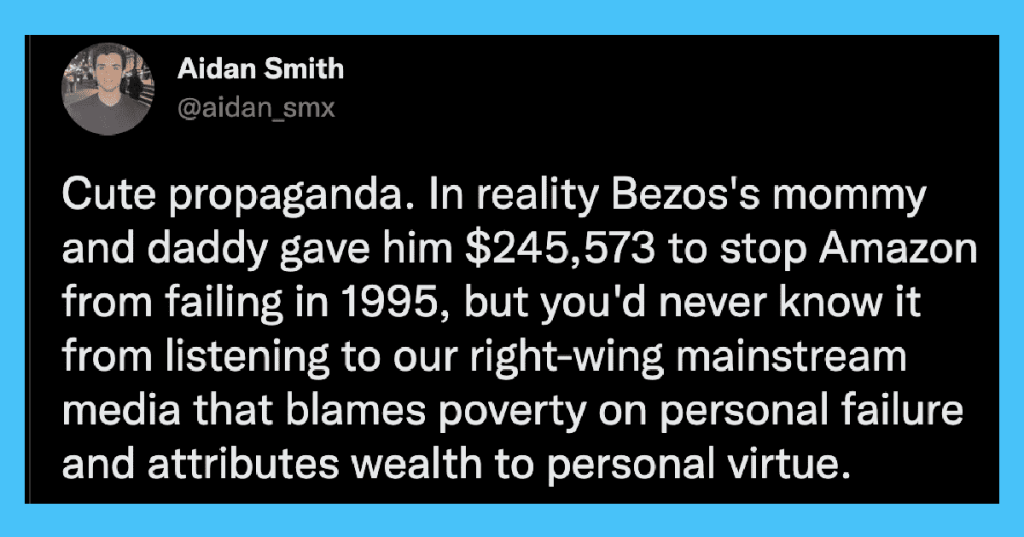 How These Billionaires Actually Got Their Starts

There has been a lot of talk in recent years over the term “self-made” and what it actually means – and whether or not any of the billionaires we know really started with nothing.

This viral Twitter thread is unpacking the answer to just that question, and honestly, the truth is pretty darn enlightening.

First, Jeff Bezos definitely did not make Amazon a success with no help from his (wealthy) family.

Cute propaganda. In reality Bezos's mommy and daddy gave him $245,573 to stop Amazon from failing in 1995, but you'd never know it from listening to our right-wing mainstream media that blames poverty on personal failure and attributes wealth to personal virtue. https://t.co/vM15SKIcWs

Bill Gates also does not come from a family of paupers.

Gates is a talented individual but his career break wouldn’t have happened if he wasn’t the child of wealthy, well-connected parents who were able to convince IBM to hire the-then obscure Microsoft to build an OS. He likely wouldn’t be a billionaire if he was born working-class.

And Warren Buffet had some pretty sweet connections of his own.

Being from a wealthy family allows you to take risks from a young age without penalty.

Mark Zuckerberg greatly benefitted from his parents’ ability to pay extra for his education.

…and got software developer David Newman to give him private tutoring in computer science before he even entered college. Zuckerberg, is, like others mentioned, an intelligent individual in his own right, but if he was born into a working-class family he simply…

a computing prodigy, which, again, couldn’t have happened if his parents didn’t hire a software developer to tutor him. The benefits of having wealthy parents, even if they don’t give you a 1/4 million as Bezos’s did, can’t be underestimated. There is no fair playing field.

None of the wealthiest families in the country got there without a leg-up from the generations that came before them.

People laugh when Kylie Jenner is described as a “self-made billionaire” as if she doesn’t come from one of the wealthiest/best-known families on Earth, but really, it’s no more absurd then describing Gates’/Bezos’ wealth as being a “self-made” product of meritocracy.

Some folks think there’s nothing but jealousy behind pointing out facts like these on the internet.

They're not mad about success, they're mad because regular people without huge leg ups in life are belittled for not succeeding like the uber rich. If people weren't treated like there was something wrong with them for not having lots of privilege, this wouldn't be a conversation

No one is saying he is a bad person for asking his parents for money. They're saying he had a leg up on achieving success because he had wealthy parents who could do that for him.

But others think it’s an important reminder that nothing comes from nothing – and billions of dollars almost always come from something (or somewhere or someone),

I repeat the #1 SECRET to Successful Entreprenuership is
-Family MONEY and CONNECTIONS https://t.co/NlkEc1z56T

Just like when we wait for every single, "This 20-30 year old has no debt and a 6 figure salary," story to tell us that their family connections and inherited wealth made it possible. https://t.co/PJxJ1B2Vs6

My mom was tired for top student in her area, she's wicked smart. Dropped out of med school because she couldn't afford to eat on the weekends and was stealing food, and couldn't do that anymore. Grandparents knew, had no money for her ? https://t.co/jepYRuW3q5

So the next time you hear someone saying that anyone can get rich and that it’s easy to get out of poverty and turn nothing into millions, you’ll know that’s not even close to the truth – family money and connections are pretty much a requirement to make a billionaire list.

And you know, if any of these people paid their workers what they’re actually worth, they wouldn’t be billionaires anymore at all.

I suppose that’s a whole different conversation for another day, though.