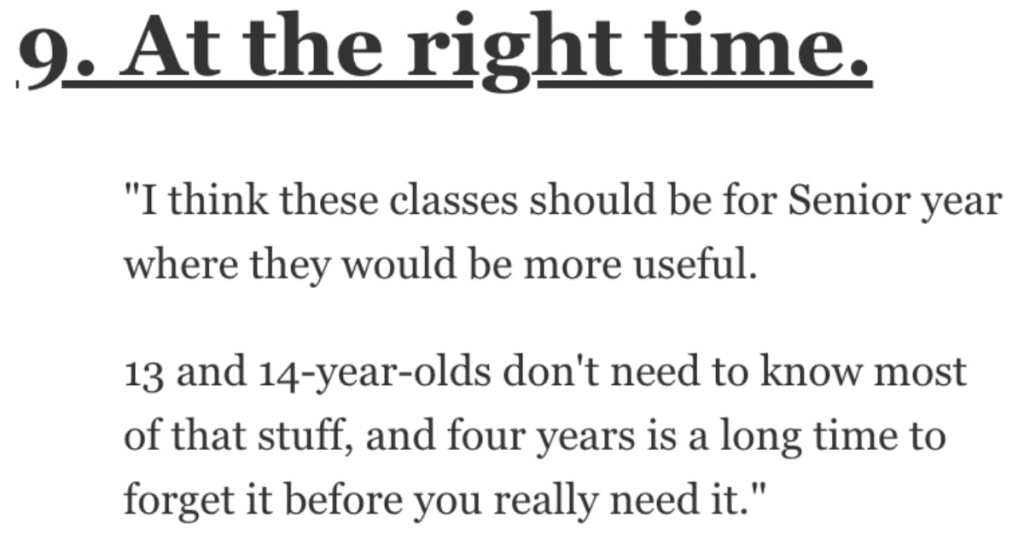 How Would You Feel About Schools Teaching Basic “Adult Stuff” Like Doing Taxes and Cooking? Here’s What People Said.

When I look back on my school days, there were a lot of good things that I learned over those years, but I wish I would’ve been taught more practical things about finances, taxes, etc.

So, should schools dedicate time to teaching students “adult” things?

Let’s see how people on AskReddit responded to this question.

“My school had a class like that, most of the classmates didn’t pay attention and now complain 10 years later that they never learned about taxes and credit card interest.

Also some parents were super upset about the school “overstepping” their boundaries by teaching basic budgeting, I can’t imagine that situation has gotten any better in the last 10 years.

I’m not against the class being taught, but at the at the end of the day you have to realize that all that stuff is easily learned once you are an adult with just a minimum amount of research – if someone isn’t taking the 15 minutes it takes to learn how to wash their clothes properly or watch a youtube video for a basic recipe as an adult when they actually need to do those things to function, no way in hell as a teen would they pay attention to a class that tried to teach them that.

It’s still a good idea to have the class, but it isn’t some magical fix everyone seems to think it is. I am against the adding an extra hour of school though on top of regular school though.”

“This is the Information Age. You don’t need to be a wizard to figure stuff out when it’s literally all at your finger tips.

Go ahead and Google “how do I wash my clothes” and you can undoubtedly find hours of YouTube videos demonstrating exactly that.

People need to take the tiniest bit of initiative and not just expect it all to be spoon fed.”

3. Should be learning at home.

“I feel like a lot of this is just stuff you should be learning at home anyway.

Parents, get your kids to do chores. Sure, it’s a bit of effort, but I’ve personally found that the barrier to doing chores is less knowledge of how do do them and more the lack of it being an instilled habit.

Most chores are pretty simple and can be taught in 5-15 minutes. Good cleaning and tidying habits take a long time of dedicated necessity.”

“When I taught middle school, I taught an entire unit on calculating sales tax, tip, how to calculate discounts and markups on prices of items.

We taught simple interest. We taught how to calculate overtime pay. I would say over and over how these were things they would see every day as an adult.

Their response? “The cash register will do all that for me. “ or “the bank will figure that out” or “my boss will figure it out”

I would ask”what if the person figures it out wrong? What if the register doesn’t do the discount properly and you pay more than you should have? What if your boss calculates your overtime wrong and shorts your paycheck? You should be able to double check these things to protect yourself. “

You think they cared? No. They just shrugged at me and said it wasn’t that big of a deal.

I teach high school now and kids insist they never learned these things. But I know they did, BECAUSE I USED TO TEACH IT. Without desire to learn, offering the information will not make a difference.”

“It could be done as an elective.

These are things that could and should be taught by parents, but they aren’t things all parents know, and not all kids have parents who would take the time to teach them either way.

It should be available for kids who want it, but not required, and certainly not adding an extra hour to the school day.”

“Schools have these already and the kids in them don’t care.

It’s not immediately relevant to their lives so they don’t pay attention. Sorta like if I were to talk to you about the do’s and don’ts of denture cream. You say, “eh, I’ll figure it out later when I need to know it” and stop paying attention.

I’ve taught in several schools that have tried to teach social skills, kindness, meditation, financial literacy, etc. In every case, the kids did not care. It was their least favorite part of the day because it felt like a waste of time.

The point of education is to teach thinking, not doing. A well-educated student can teach themselves these things. A quick Google search can teach you how to file taxes, cook, etc.

But you can’t Google how to do Algebra 2 and expect to understand what you read without some background in the subject matter.”

I had a lot of teachers in high school try to give us life advice and no one listened or took it seriously.

Teenagers are all little sh*ts.

“I took home economics and learned how to cook. I took financial literacy to learn about taxes and budgeting and investing.

Is Utah just waaaay ahead of the other states or is this a made up issue? I’ve seen people THAT TOOK THESE CLASSES AT MY SCHOOL post memes about not learning how to pay taxes and sh*t.

I wonder if the real problem is that nobody remembers this stuff cuz they teach it to you when it isn’t relevant to your life.”

“I think these classes should be for Senior year where they would be more useful.

13 and 14-year-olds don’t need to know most of that stuff, and four years is a long time to forget it before you really need it.”

“People are just lazy and want to blame their laziness on the system not teaching them.

Like any tax system, like TurboTax, walks you literally step by step through the process – you don’t need to know anything about taxes and just run through their software and you’ll be done.

If they teach it in school it’s going to need no more than a single hour to “teach” the basic 1099 and of course there’s no point to teach the advanced stuff when 80% of adults don’t even use those forms. Who is going to remember an hour of anything mixed with the thousands of hours of math, science, history, English we learn in school?

The purpose of schooling should be to focus on those hard things anyway – something that takes an hour to learn doesn’t need to be taught in school.

The most basic things they teach in school – the original purpose of schooling – literacy – takes a kid a year or more to learn to read and write properly. A year. That’s one heck of a long YouTube video….”

“I think that they already waste enough time and it would be worse for kids whose parents already taught them that stuff.

Washing clothes is really a 20 minute lesson, and cooking/taxes have their own elective classes already.”

“Most of the people who would benefit from this kind of teaching wouldn’t pay attention to it anyway, not to mention that as you say it has never been easier to get information on how to do the basic things in your life.

If I don’t know how to boil an egg and can literally Google it. Most food you will buy has step by step instructions on how to prepare it, your clothes and detergent will both have care/usage instructions.

The issue isn’t that this information is missing or inaccessible but that people would rather say they weren’t taught how to do something then take any accountability for increasing their own knowledge.”

Is it a good idea?

Sound off in the comments and share your thoughts!