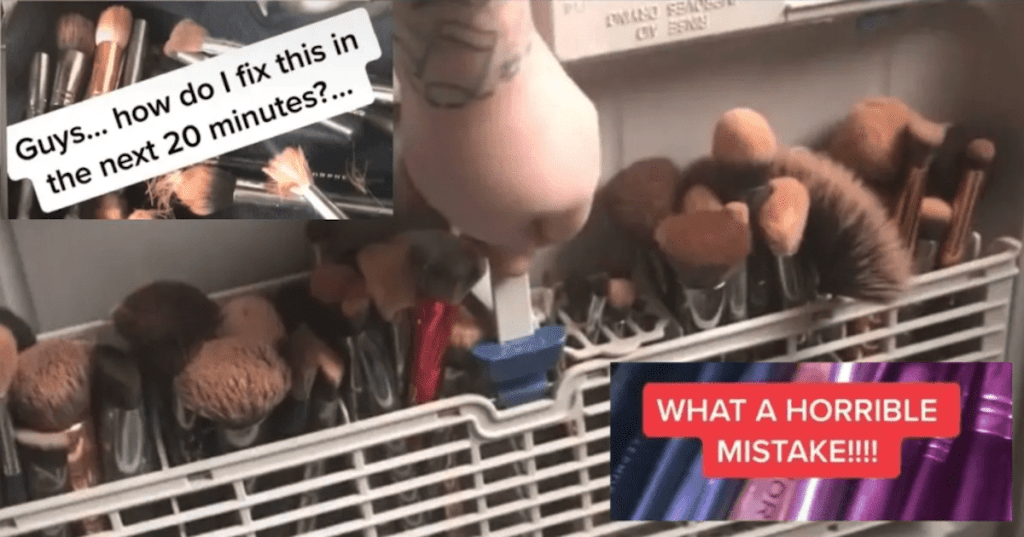 We all make mistakes. Personally, I think my husband is afraid to do my laundry lest he ruin some favored article of clothing. Sometimes we try, and things go spectacularly well.

Other times, despite our hearts being the right place, things just don’t work out how we planned them. That’s what happened for TikTok user Kevin last January.

It all started very innocently according to Distractify.

Kevin’s wife Chrissy had been complaining about not wanting to clean her makeup brushes, and who can blame her? Apparently she (and Kevin–“surprisingly,” according to Kevin) is a professional makeup artist, so she had a LOT of brushes.

Despite a TikTok profile filled with “how to piss off your wife” videos, Kevin decided to do something nice and clean them for her.

Ummmmmm TikTok I need your help!!! How do I fix this!!! #NHLFaceOff #HealthyCooking #ohno #mistake #makeup #makeupartist #wompwomp #womp

Now, I am not a makeup person. I don’t actually own a makeup brush, and had no idea they required special handling (or washing, if I’m being real). So when I first heard about this story, I genuinely wondered what could possibly go wrong with his approach.

But judging by the responses on social media, anyone who actually uses a makeup brush knows that this cannot end well. Many users questioned whether Kevin needed a police welfare check after this stunt, noting that the brushes were easily worth more than $500.

Kevin checked in about 2 days later to let everyone know that he was okay, and to explain a bit more of the story.

Here is the update y’all wanted! If you haven’t seen the video go check it out NOW! #thatvoicetho #ZodiacSign #SkinCare101 #married #voiceeffects

Some viewers weren’t buying that any professional makeup artist, even a stressed out toddler dad, would legitimately expect a good outcome from the dishwasher method. And after all, his TikTok bio describes him as “THE ORIGINAL SHOCK TOK-ER.”

But giving him the benefit of the doubt, we all do things where we “knew better” sometimes, and toddlers can do your head in.

Luckily, Kevin’s story has a happy ending. In the comments of his first video, an enterprising TikTok’r called @laurag_143 reached out to Kevin, offering to send some replacements to Chrissy from her monthly makeup subscription service LiveGlam.

And her follow-through totally exceeded expectations.

Thank you so much to @laurag_143 from #LIVEGLAM … I guess I’ll keep these out of the dishwasher!! GO CHECK OUT THE ORIGINAL VIDEO ON MY PAGE!!!!!!!!

All’s well that ends well, but suffice to say, if you’re messing with someone else’s stuff, it’s always a good idea to Google first.

Google has stopped me from doing things like combining bleach and vinegar in the washing machine (dangerous), and trying to eat bell pepper leaves that I thought were spinach (toxic).

So when in doubt, Google it. What do you think about Kevin’s videos? Did he get off the hook too easy? Tell us in the comments!