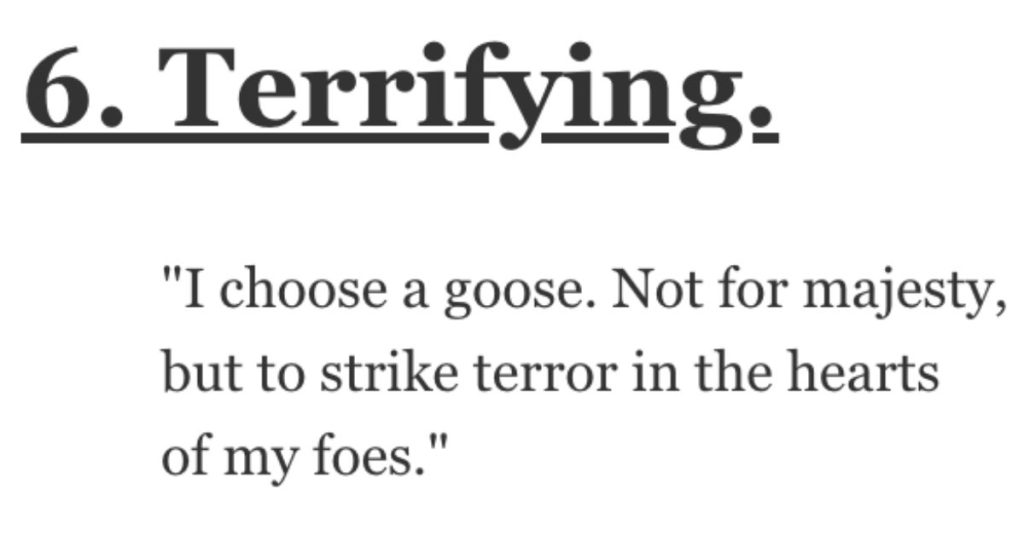 If All Animals Were Horse-Sized, Which Would Be the Most Majestic to Ride Into Battle? People Responded.

And who’s ready to get WEIRD?

Good! All of you!

Here’s the question: if animals were the size of horses, which one would be the most majestic to ride into battle?

Let’s check out the responses from AskReddit users!

The rate at which a horse-sized hummingbird would need to consume nectar would be nothing short of astonishing.

You would need David Attenborough to tell you about it, let’s put it that way.”

Certainly bigger than a horse, but still majestic. And they use them for bombing raids.

If it’s physical strength is not a problem, then a peacock.”

Imagine riding her and a hoard of bees just keep following behind you.”

Me riding into battle with a necklace of little tree air fresheners.

Plus when they are threatened and stomp on the ground and stuff? Imagine that but in huge stinky scary size…”

“I choose a goose.

Not for majesty, but to strike terror in the hearts of my foes.”

Fun fact: Corgis are reportedly a favored mount for faries in Welsh folklore.”

Imagine your mighty stead packing it’s cheeks with the bodies of your enemies.”

They’re so freaking fast and have the ability to disappear the moment you lose eye contact.”

Imagine the destruction a horse sized Golden would cause, running & jumping around bumping into everything, slobbering everywhere, swiping everyone with their tail, and lets not forget picking up every single thing they can get their mouth around!”

“A guinea pig!! They’ve got a huge head-to-body ratio, & they’re basically shaped like a canned loaf of bread… Horse sized, they’d be terrifying.

Between the 5 foot tall face & the huge cylindrical body, the earth would be shaking under their feet.”

You can ride it into battle and its will look awesome and it’ll beat the s**t out of anyone that went near it.”

You want majestic? You got majestic! The enemy would all stop and say in unison … “Wow, that’s majestic!””

Their smooth round bodies and thick exoskeletons allow them to plow through hordes of ants unscathed while gobbling up aphids one by one, and they can spray noxious acid from their mouth when especially threatened. And of course, they can fly.

So you basically get a living, flying, acid-spewing tank that’s also brightly colored to boot.”

“Since EVERY animal is horse sized, and they retain all their previous traits. That would make ants one of the biggest menace to society

Imagine trillions of horse sized ants charging at you, especially the Argentine ants. Those ants will dominate the world, I tell you.”