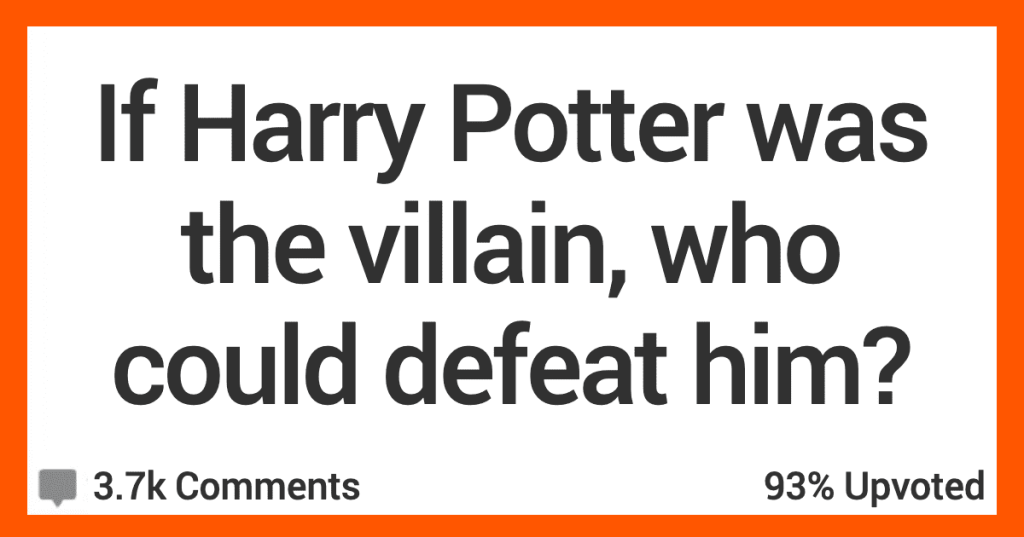 If Harry Potter Was the Villain, Who Could Defeat Him? Here’s What People Had to Say.

Today is your lucky day!

Because you’ve been given the opportunity to sound off about who you think would be able to defeat Harry if he was the villain!

So, after you see how AskReddit users responded to this question, tell us what YOU think in the comments!

I maintain that Fred and George were the most talented wizards in all of Hogwarts. The books repeatedly show how difficult it is to create new spells and potions, with almost every student just using rote memorization.

Yet the twins singlehanded invent countless new potions and enchantments basically on a whim.”

She’d get cross and he wouldn’t be able to handle the disappointment.”

She might not be the best at dueling but she’s smart enough to beat him without going head to head.”

I feel like my boy has some untapped rage.”

If the whole story was rewritten with Harry as the antagonist, I think the perfect trio would have been Luna, Neville and Hermione. The three would have easily defeated Harry.

If the story and relationships are as-is, I think Narcissa is a good bet for defeating Harry. She would have done anything for Draco, was more strategic and manipulative than Lucius, and until the very end, Harry was the antagonist in Draco’s perspective.”

Harry Potter without bones would be an easy k**l.”

“Longbottom was always said to be the backup chosen one in the prophecy.

If Harry were somehow corrupted, Neville would take up the main protagonist role to fight him, with hesitant help from Hermione and Ron of course.”

After he blew her up, she is coming with revenge and all her dogs!”

“Honestly, without Hermione, Harry is nothing.

So Harry beats himself.”

She would have him by the balls once they were married.”

From what I remember, Harry wasn’t an exceptional wizard like Voldemort or Dumbledore. The reason he survived his encounters with V was due to the spell of his mothers love protecting him specifically from Voldemort. It’s not like no one else, like Bellatrix, couldn’t have k**led him.

They just didn’t because they were saving him for Voldemort. Also, I seem to remember that Neville could have just as easily been the chosen one had Voldemort attempted to k**l him rather than Harry.”

Harry Potter’s adventures included a tremendous amount of luck and help from others.”