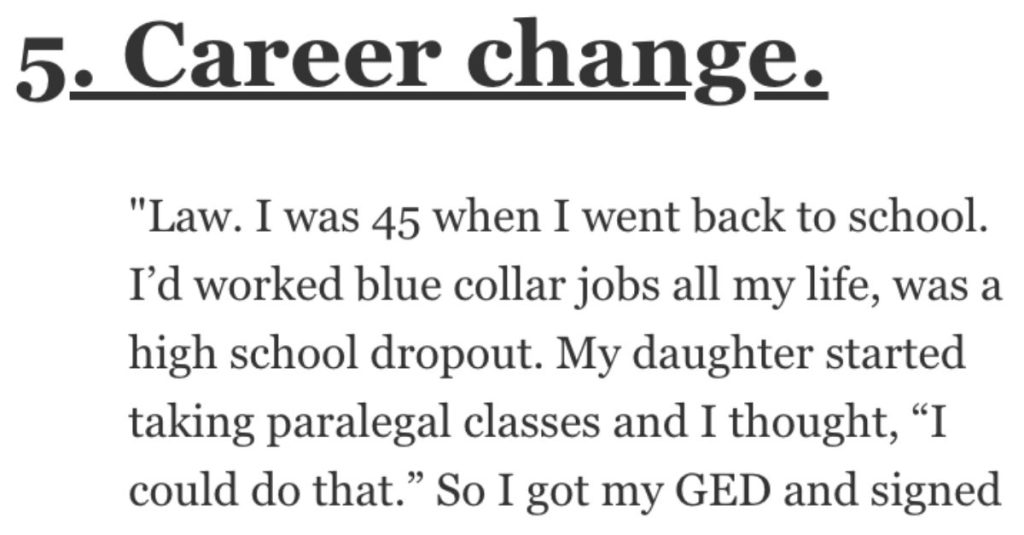 If You Discovered Your Passion Later in Life, How Did You Figure It Out? People Responded.

Some folks know what they want to do with their lives when they’re still teenagers and other people take years to figure out what they’re passionate about.

And you can’t beat yourself up if you think you’re getting on in years and are still struggling to find out your purpose.

You’ll get there eventually!

People on AskReddit shared stories about how they discovered their passion later in life.

“I went to college twice in my early 20s for journalism and communications, but never graduated. I spent the rest of my 20s in a dead end food service job, miserable and angry at myself. I had no idea what I wanted to do with my life

My extended family has lots of little ones (cousins having cousins) and every time there was a family get together, I always found myself playing with and entertaining the kids. One day, my uncle pointed out how good I was with kids, and did I ever consider working with them?

I laughed it off, but later thought “hey, I have nothing better going on. What’s the harm in researching a bit? I found out I could become an early childhood educator, working in daycares or kindergarten classes. So I applied to a couple of colleges and got in right away (applied on a Monday and got accepted the Friday). I quit my dead end job and focused entirely on school.

I made the deans list all 4 semesters (something I have never done), and aced all my classes. I had a placement at a daycare/before and after school card place, and they hired me right after I finished my placement. So now I’m working there and happier than I ever was in my 20s.”

Then about 3 years ago I heard about #the100daychallenge where the goal is to create art every day for 100 days. I never stopped and made it a goal to hit 1000 days. In that time, I won contests, got about two hundred commissions, raised over $5000 for a charity, and had a great time.

When I hit the 1000 days back in December, I decided to go back to college and get an art degree. I signed up for classes and talked with my manager at work to see how much they would pay for college, she was excited that I was going to get a business degree and said she’d work on getting all of the classes covered.

Free college became too tempting to pass up so now I’m planning on getting the business degree and then on to law school because they’ll pay for that too. I just finished my first semester with a 4.0 and I’m on day 1136 of my non-stop painting journey.”

“My dad discovered his life’s biggest passion at 67.

“I just started community College at 40 and I’m in my second semester.

I told a colleague I would just perpetually stay in school if my company would pay for it. I’d go for a doctorate.

I love learning which is weird for me to say considering I very nearly dropped out of high school.”

I’d worked blue collar jobs all my life, was a high school dropout. My daughter started taking paralegal classes and I thought, “I could do that.”

So I got my GED and signed up for a 2-year paralegal certificate program through the local community college. Fell in love with law. Also discovered I was good at it. I had several professors who were lawyers tell me I’d be wasted as a paralegal and should go to law school.

So I transferred to a 4-year school. Worked full time through undergrad and graduated with honors. Got into law school. I graduated law school at 55, oldest in my class. But I’d gone from being a high school dropout to a lawyer in just 10 years.

Passed the California bar first try and I’ve been a public defender ever since, which is the only thing I ever wanted to do with it. I’m 60 now but I’m healthy and energetic and have a lot of years left. I love what I do, I’m very good at it, and it’s the best move I ever made.”

“I was 39 when I took a temp job in a social services type industry. Just basic stuff.

Realised after a couple of years that I’d circled back to my idealistic 17 yo self’s plan for my career. Spent the previous 20 working s**t jobs I h**ed.

Turns out it’s really important to do something that aligns with your values. Finish the week feeling like I’ve contributed to society, rather than working to screw people for money.”

I’ve been doing it for years now I’m in my mid 40s and still rollin.

It makes me a bit sad I didn’t start when I was younger, but I reckon I’ve got another ten years left in me.”

On a whim I took a class at a local community center and got hooked. After learning some basics in the class and following some YouTube videos I can make a passable pair of pants/trousers and basic shirts. I’m lucky that my local library had sewing machines you could check out so I didn’t need to commit any real money early on.

The best thing to come out of learning this new skill was making a pair of pants with actual pockets for my wife. Guys, you have not seen joy until you see your wife get a pair of functional custom pants with human-sized pockets. I thought her head was going to explode she was so happy.”

“I live in Switzerland and once I finished school I had no idea what I wanna do so at first I signed up for an IT school.

After 3 years of that I didn’t want to continue anymore so I switched to a psychology school. Anothef 3 years there and I got tired of it as well. Then I was jobless for a year but eventually needed a part time job for money, so I applied at Starbucks and became a barista.

It was supposed to be just a temporarily solution but I started to really enjoy the job! So far that I ended up attending a 1 month bartending school last year and now work as a Bartender at a Viking-themed metal bar! I still do my job at Starbucks since I do enjoy it. But I plan to do bartending fulltime once Corona finally is over.”

“I always wanted to learn an instrument that wasn’t academic related.

Over COVID lockdown I picked up the guitar.

I picked it up pretty quick. So I learned the drums.

I assumed that I haaaated cooking because my parents h**ed cooking so much. We were literally allowed to have ice cream floats for dinner if we made them ourselves and didn’t bug mom to feed us.

In my early 30s I started having gut issues which made it hard to eat most cheap, pre-packaged stuff. My budget was tiny and I then hit a depressive episode where I didn’t have the emotional energy to go be among humans. All I would do was go to work, come home and cook all evening. I practiced different recipes and techniques.

My main focus was making local seasonal produce delicious and yet still as healthy as possible. It was so much fun! It’s like a craft project you get to eat. I had a few kitchen fails, but most things turned out pretty good. I always made batch meals so that I had wiggle room on days I was too depressed to cook.

As a benefit, the healthier diet -combined with learning new skills and seeing myself tangibly improve at something- all made huge, positive impacts on my life. It’s been almost a decade of cooking, learning and kitchen experiments. That depression ended up being a surprisingly positive event in my life.”

“PSA: you don’t have to be passionate about your job.

Your passion can be a hobby you do in your free time. I don’t think I will ever find a vocational passion.

Used to think I was broken because of that but really there is no requirement to be head over heels about what puts money on the table and food in the pocket!”

What’s your passion and when did you figure it out?