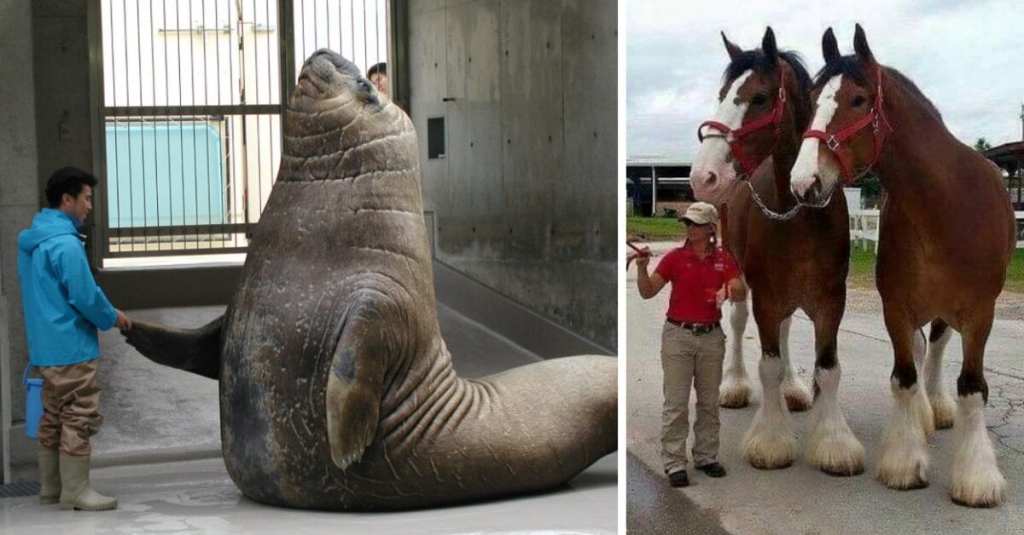 Incredible Photo Comparisons That Reveal the True Size of Animals

Sometimes we get so wrapped in our own lives and we have our eyes glued to a computer or a phone screen so often that we forget how the incredible this planet can be.

We are surrounded by beauty and nature and animals on all sides, but unless we’re actively seeking it out, we become oblivious to all the great things that are right under our noses.

I feel like the photos you’re about to see are the kind that we should seek out and look at every once in a while so we can truly appreciate how amazing life can be and how humans are just a small part of the planet. The animals are actually running this place, we’re just here taking up some of their space.

So get away from the rat race for a few minutes and enjoy these amazing pics of HUGE animals.

Tagging and blood tests for bison. Just to give you an idea of how big they are, this male weighs around 3000lbs. from Damnthatsinteresting

2. I didn’t know they were that big, either.

Were you aware of this?

I never knew what absolute U N I T S Clydesdales are until I saw this picture. from HumanForScale

And I do mean GIANT.

Minazo the Southern elephant seal was known for his blue bucket, he lived in Japan’s Enoshima Aquarium until his death in 2005. from elephantseals

5. That thing would take your arm off.

And, by the looks of it, a pretty nice one, too.

My dad and my dog (dad is 6’2") from AbsoluteUnits

7. Just so you realize how big whales are.

A whale skull with a human for scale. from interestingasfuck

8. Dangerous or not, I wouldn’t get near that thing.

That is absolutely horrifying.

Believe it or not, this is one of the least dangerous spiders we have in Australia from WTF

This is a hammerhead bat and is by far the creepiest animal I’ve seen. from pics

Wouldn’t want to run into this thing in the wild.

The size of a tiger paw compared to a man’s hand. ? from NatureIsFuckingLit

11. That thing is a SALAMANDER.

My mind is blown.

The critically endangered giant Chinese Salamander (largest salamander and amphibian in the world). It apparently sometimes smells like pepper and makes noises that sound like small children. Scientist for size- from HumanForScale

12. Those folks probably got a bit of a scare.

But…I wouldn’t want it inside my house.

In the comments, share some interesting facts or photos about animals that you think will blow our minds!