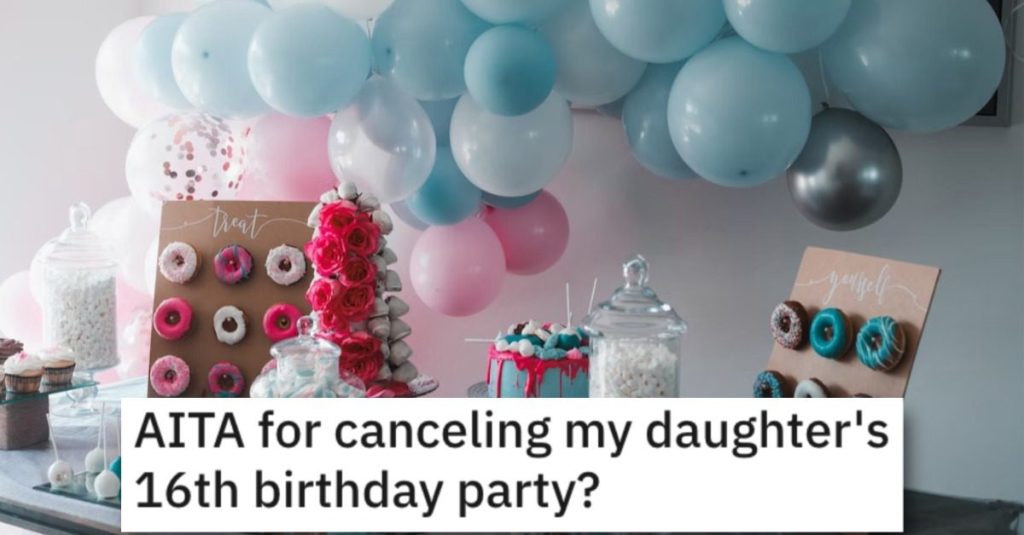 Is She Wrong for Canceling Her Daughter’s 16th Birthday Party? People Responded.

You know that things must be pretty bad when someone cancels their daughter’s Sweet Sixteen party.

So what happened here?!?!

Read on to get all the details and let us know if you think this woman went too far.

Marco and Bruce are night and day different. Marco works in construction, plays softball on the weekends, and coaches my daughter’s soccer team. Bruce teaches at a university, plays the piano, likes going to the theater, and is an amazing baker and cook.

It’s not uncommon that we will go to one of Pam’s soccer games, and then afterwards, the whole team comes back to the house to enjoy cookies or cupcakes made by Bruce. At the end of the season, we do a big dinner for the team and their parents that Bruce cooks.

Bruce and I have been married for 11 years and every year for the kids’ birthdays, he makes the most incredible cakes. Whatever they like that year, he does. We’ve had Pokémon, Doc McStuffins, Paw Patrol, among others.

February is Pam’s 16th birthday. Her sweet sixteen. Bruce has been planning this gorgeous cake that encompasses all of Pam’s interests and different stages of her life.

The other day another mom sent me a link to a TikTok that Pam and several of her teammates did. It uses audio from an episode of Family Guy. It’s a video of Bruce taking a cake out of the oven with “Chocolate cake, a la Blake,” playing in the background, followed by a cut to my daughter and her teammates with Pam holding up her hand and mouthing along to, “Hundred bucks, Blake is gay,” out of the side of her mouth.

When I confronted Pam, she said it was just a joke. I told her that it wasn’t funny, Bruce saw her and treated her like his daughter, and it was disrespectful to both of us. She told me that I was overreacting.

I told her that if she didn’t take it down, and apologize to Bruce, I’d tell him not to make her a birthday cake. She rolled her eyes and said that she’d take it down.

Shortly after I was walking by her room and heard her on the phone. It was muffled but I heard her talk about me being dramatic over my f-word husband.

I ordered her to hang up the phone. She hung up and said she was just blowing off steam. I called her a spoiled ungrateful brat and how dare she use that word. She started crying and said she didn’t mean it. I told her that her birthday party is canceled, there will be no sweet sixteen, and that I was going to tell Bruce to stop baking for the team and that we would never do a team dinner again.

I am still so angry. Marco told me that I need to let it go, that I’m expecting too much from a teenager, and that he would have a party for her if I didn’t.

Bruce was hurt when he found out but thinks that we should still let her have her party. My sister tells me not to doubt myself and I made the right call, but I wonder if I’m acting with too much hot blood.”

One reader said she’s NTA and that this behavior is not appropriate.

Another individual asked if there is some other punishment in store…

And this Reddit user said she needs to educate her daughter about these kinds of things.