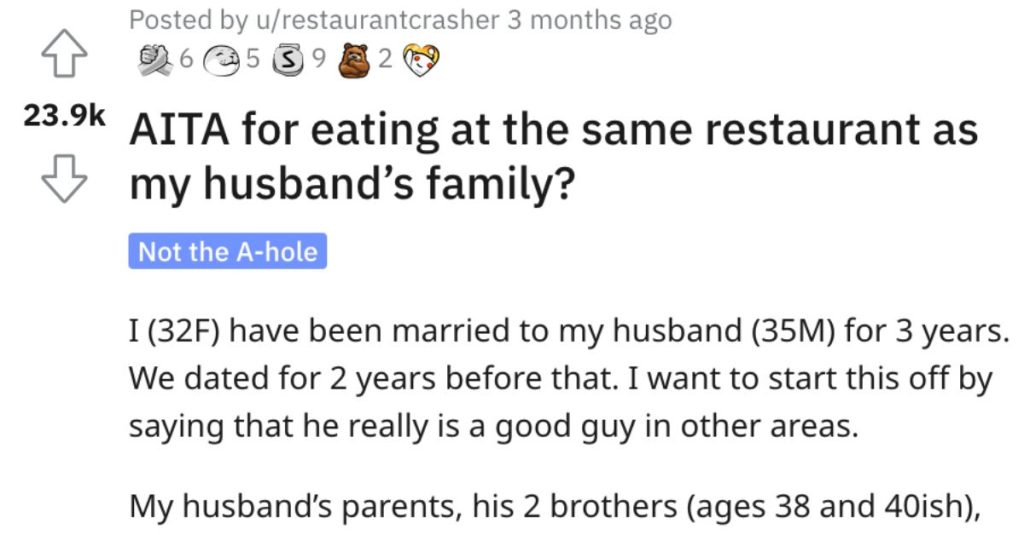 Is She Wrong for Eating at the Same Restaurant as Her Husband’s Family? Here’s What People Said.

This sure doesn’t sound good…

When you’re not invited to your husband’s family restaurants, something must be wrong, right?

AITA for eating at the same restaurant as my husband’s family?

“I (32F) have been married to my husband (35M) for 3 years. We dated for 2 years before that. I want to start this off by saying that he really is a good guy in other areas.

My husband’s parents, his 2 brothers (ages 38 and 40ish), and his brothers’ girlfriends/fiancées have a tradition of going out to dinner once a month. I am invited about 50% of the time. I’ve talked to my husband’s brother’s fiancée, and she says she is invited every time.

When I say I’m not invited, I mean that my husband tells me “I’m going to the family dinner. It’s probably best if you sit this one out.” When I expressed that I wanted to come, he told me that it would be for the best if I didn’t. It has caused several fights.

About a week ago, my husband went to a family dinner that I wasn’t invited to. I was very pissed. So earlier that day, I called and made a reservation at the restaurant they were going to. My husband left the house, not knowing about my reservations, and I left 15 minutes after him.

I ended up seated at a table where I couldn’t see his family. So I got up as if I was going to the bathroom and walked right past them. They were all there, including his brothers’ SOs. My husband looked completely shocked and asked me what I was doing there. I told him that I had just been dying for a steak, so I came and got one at the restaurant.

My mother in law said it was very rude of me to interrupt their family dinner. I pointed out that I wasn’t trying to join them, I was just going to the bathroom. I told them to have a good meal and I left. I went and finished my steak by myself.

My husband was really pissed when he came home, and he told me that he couldn’t believe how much of an a**hole I had been. I said that he was an a**hole for not inviting me to his dinners when his brothers’ SOs got to go. My husband said that the decision to invite was between him and his family, and I should respect it.

Anyway, with the way the word a**hole was thrown around, it made me think of this sub. So I wanted to ask if I am the a**hole. Am I?”

Check out how Reddit users reacted to what happened.

This reader said she shouldn’t be with this guy and that she needs to get away from this family. 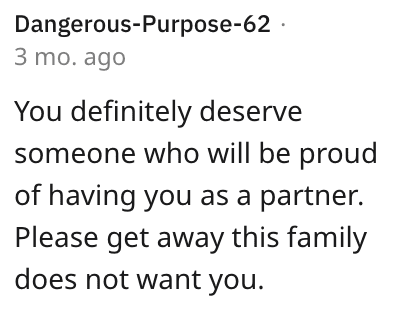 Another Reddit user said she’s NTA and that her husband is not a good guy. 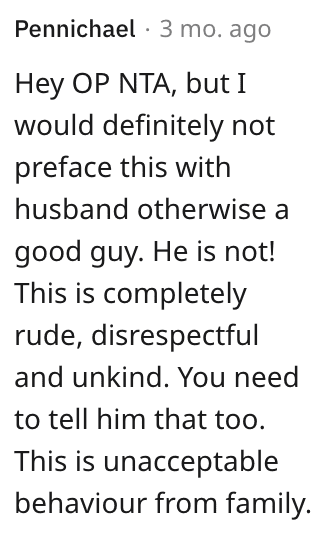 This individual also said she’s NTA and that she should consider getting a divorce.

Now tell us what you think.