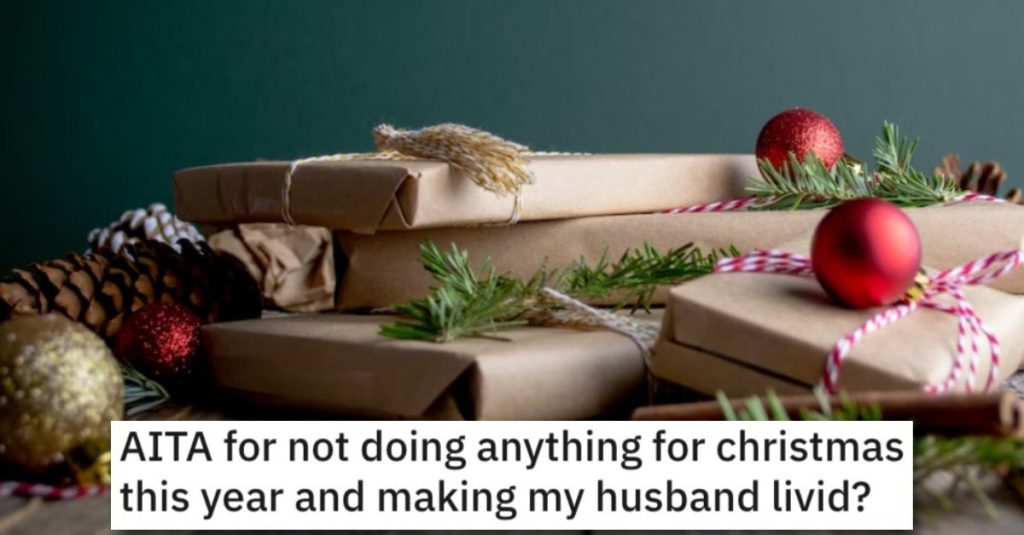 Is She Wrong for Not Doing Anything for Christmas This Year and Making Her Husband Mad? People Shared Their Thoughts.

The holidays are tough for a lot of people.

And that can be true for all kinds of reasons.

And today we’re going to read a story from a woman who wants to know if she’s an a**hole for making her husband angry because she doesn’t want to do anything for Christmas.

Read on and see what she had to say…

AITA for not doing anything for Christmas this year and making my husband livid?

My husband works full time and gets an okay- salary BUT he’s tightened the grip on spending for the past 4 months to be able to save up to go watch the football event overseas. He’s literally obssessed with anything to do with football. He said he rarely ever gets to do what he wants and so I didn’t want to judge him since it’s his money eventually.

We discussed plans for christmas and he told me to handle everything since he won’t be back til Dec. 20th. He told me he had put aside money for christmas decoration, food, gifts, kids needs etc. The money in total was 100$. I was completely shocked I told him 100$ for an entire family’s christmas celebration was ridiculously not enough.

He shrugged saying it’s all he’s got but I pointed out how he’s paying for his friend’s and his girlfriend’s travel expenses. He told me to just “take it” but I said that if he decided to leave me with just 100 bucks then I won’t be doing anything for christmas. We had lots of arguments and couldn’t get this resolved.

He’s in Qatar now (he left days ago). Yesterday, while I was cleaning I found an envelope with the same 100$ and a note from him telling me “to make it work”. I sent him a message that I’ve decided that I won’t be doing anything for christmas with this little money, period.

He was livid he just kept sending an angry message after another calling me “spoiled” and telling me to stop expecting to live like I was still living in my parents house and to stop trying to “rob” the kids of enjoying the holidays like the other kids.

I haven’t replied but he’s livid saying I’m punishing him for going and trying to guilt him using his own money.”

One person said she’s NTA and it sounds like her husband is financially a**sing her.

And this Reddit user also said she’s NTA and said he’s rather pay for his friend and his GF to travel than give his family a nice Christmas. 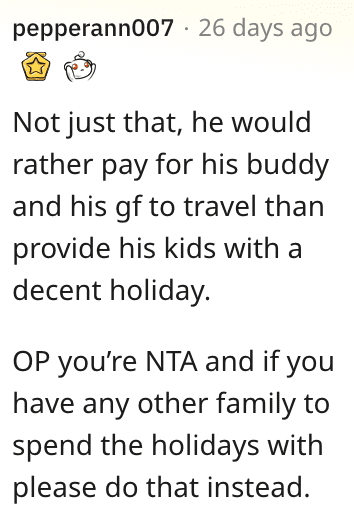 And another individual said her husband is trash and they hope she can leave him.