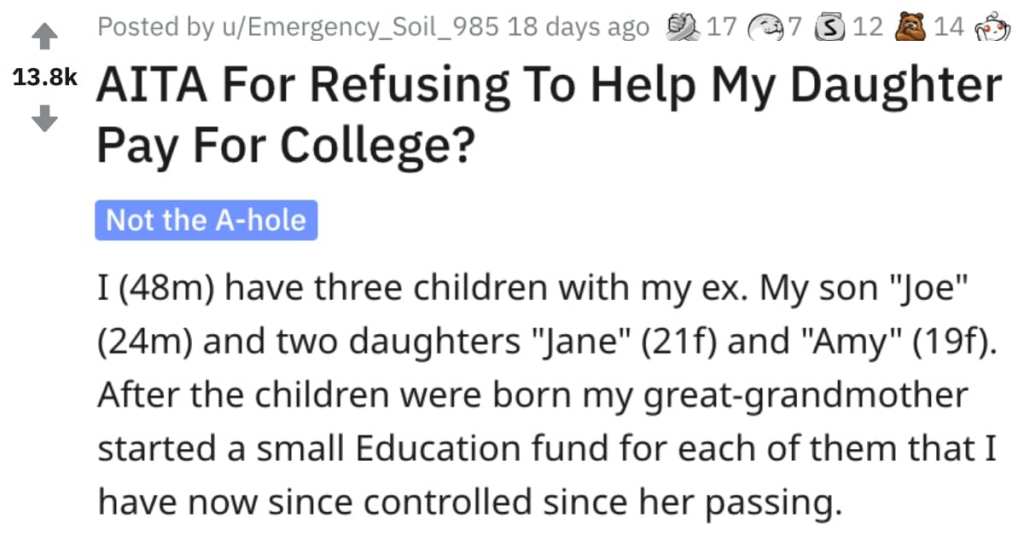 Is This Man Wrong For Refusing to Help His Daughter Pay for College? People Responded.

The age-old battle of who is going to pay for college is still going strong among children and parents!

And here’s yet another example…

A dad asked folks on Reddit if he is acting like an a**hole in regard to his daughter and her college plans.

AITA For Refusing To Help My Daughter Pay For College?

After the children were born my great-grandmother started a small Education fund for each of them that I have now since controlled since her passing.

There weren’t any specific criteria for this fund within the context of the law or Bank policy because of the type of fund my great-grandmother started. I’ve added my own money to fund and my parents have occasionally put in some cash but it was never expected. My ex never put a dime into it but always wanted to have equal control of it and every time I refused she would get upset.

Over the years she’s tried to say that she needed money from the fund for expenses for the kids, citing that the child support I was paying wasn’t enough. I still refused and said that to just send me the bill and I’ll pay for it directly. She didn’t want that and would shut up after I asked how she could be so desperate for money for our kids but refuse to give any details.

Fast forward to when Joe was going to college and I told my son to just give me enough information so that I can pay the school every semester and he’d be good.

My ex tried to convince him to get me to give him all the money so that way he could have his privacy. My son did consider it but decided that he’d rather I just do this for him because he was worried of blowing through the money. I was proud of him.

Jane, however, gave into her mom’s way of thinking and insisted that I just give her the entire fund during her 2nd year. I tried to convince her that this way was best and pointed at how well this worked out for her brother.

Jane just called me controlling and said that I didn’t respect her enough to let her make her own choices. Eventually I relented but made it clear that this was all the money that there was for her for college. That once it’s gone, it’s gone and she was on her own if she needed more.

Everything seemed fine up until about a few weeks ago and Jane called crying saying that she wasn’t going to finish because she ran out of money. I asked her what happened and surprise, surprise Jane gave money to my ex. I let her vent and then told her that everything was going to be okay.

That while she may not graduate by a certain time she can still finish school, she’ll just need to apply for grants, scholarships, loans and maybe even take a year off to just work. How I would tell the school how she was on her own so she could get more money

Both Jane and my ex are upset with me, because they expect me to pay for her schooling and that I was being horrible for wanting her to struggle with loans. To me this isn’t about being petty but rather giving Jane a hard lesson.

She wanted to be treated like an adult, well finding your own way is what adults do. Joe agrees with me but, now Amy is being pressured to access her fund to help her sister. Technically, I could help but I’d rather Jane work for it herself.

And here’s how people on Reddit responded to this story.

One reader said that the dad is not in the wrong here and his daughter will learn a lesson from this situation. 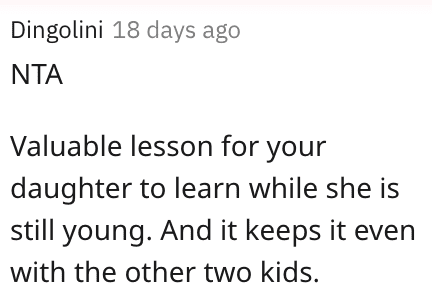 Another Reddit user argued that the girl’s mom was really out of line here and they consider what she did to be “financial abuse.” 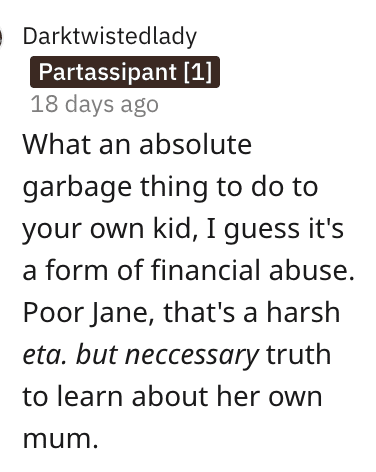 This individual thinks that the mom is also out of line and they called the dad in this story a “poor guy.” 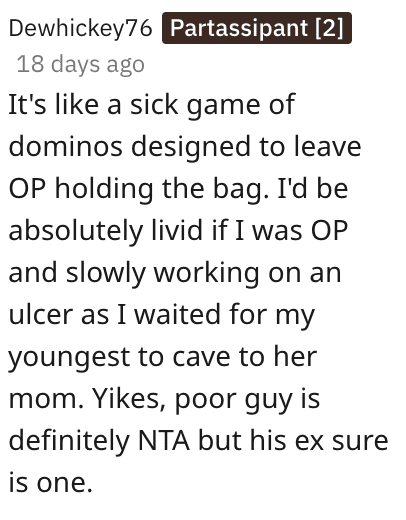 This Reddit user said that the mom here is a total gold digger and is also manipulative.

I think you’re right on the money! 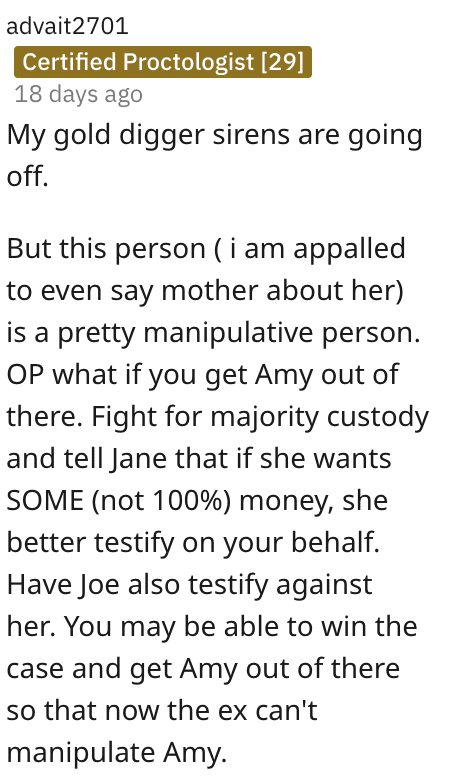 And lastly, this person disagreed with the other readers and said that the dad should not be “bribing” his daughter. Something to think about… 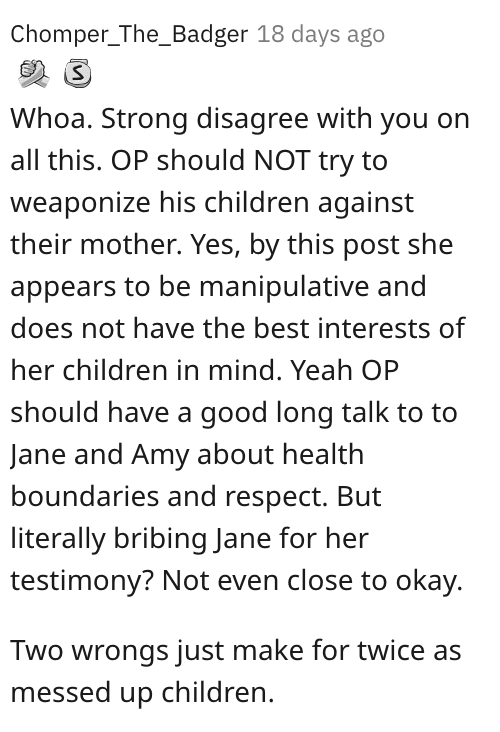 What are your thoughts on this situation?