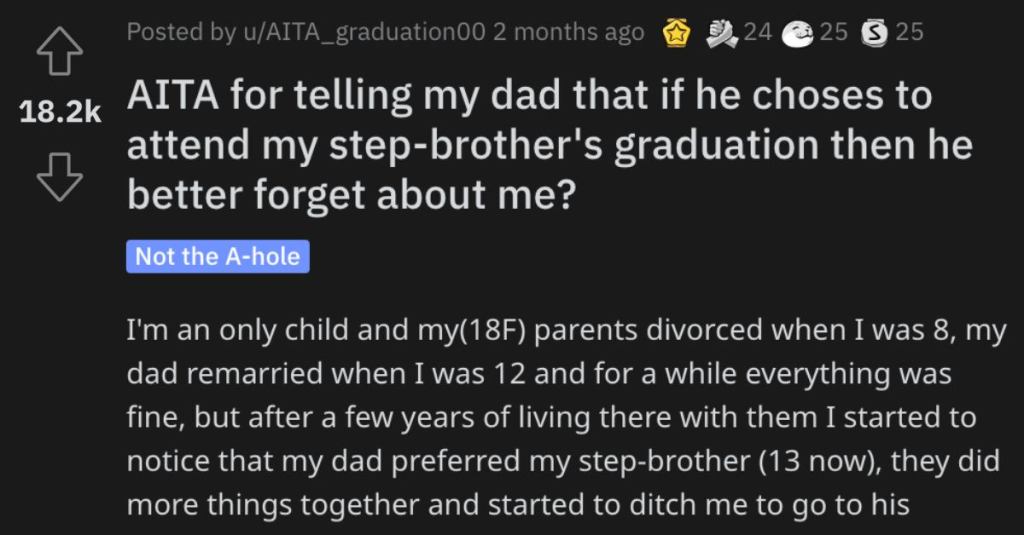 Is This Woman Wrong for Giving Her Father an Ultimatum? Here’s What People Said.

And a young woman wants to know if she stepped over the line when she gave her own father an ultimatum…let’s see what happened.

AITA for telling my dad that if he choses to attend my stepbrother’s graduation then he better forget about me?

“I’m an only child and my (18F) parents divorced when I was 8, my dad remarried when I was 12 and for a while everything was fine, but after a few years of living there with them I started to notice that my dad preferred my step-brother (13 now), they did more things together and started to ditch me to go to his games, his plays, his tournaments.

For every 10 things I invited him, he only attended to 1 maybe 2. His wife always gave excuses; ”(her son) is younger than me”, ”they are really close”, ”his dad is not involved” and told me that at least, I was lucky to have a dad with me and specifically one who was willing to ”share his love”.

Well my mom told him sad s**t and gather all this things to aim for sole custody when I was 13 and won it, only then I saw my dad being hurt for me ”being taken away” because in his eyes I was his little girl and him his little boy. I started to spend some time with my dad but only if he picked me up to do it, he still missed most of my things and I’ve always resented him and his other family for it.

Since this is my last year I had a lot of significant activities, I had my last debate, my last volleyball game, I won best essay in my class, got into best 20 alumni and finally went to pick my prom dress, some (if not all) of these things he missed because he was working or attending something regarding his family and I can’t have it anymore.

My graduation is Dec 15, the same as my step-brother’s elementary school and when I told my dad he said that he would see if he could make it which meant he wouldn’t so I came clear. I said that, while graduating elementary school is nice and yeii for him, I’m graduating high school and I’m on my way to university so he can’t really compare those things and, if he chose my SB’s graduation he better forget about me.

His wife flipped and told me that I was taking my SB’s dad away from a big day and I was being a spoiled brat, I told her that I couldn’t be an spoiled brat if I was being ignored the whole f**king time and that I wasn’t talking to her, my dad looked shocked so I said that he could be there for once or he can miss forever and left.

But now that I’m cooled off I’m starting to feel bad, I love my dad to pieces I just want him there for me too and I surely don’t want to hurt a little kid. I was wondering if I was an AH for acting how I did because he’s paying half of my college fund and I gave him an ultimatum, plus my dad is not prone to confrontation while my mother and I are.”

One reader said that the father in this story is acting pretty messed up. 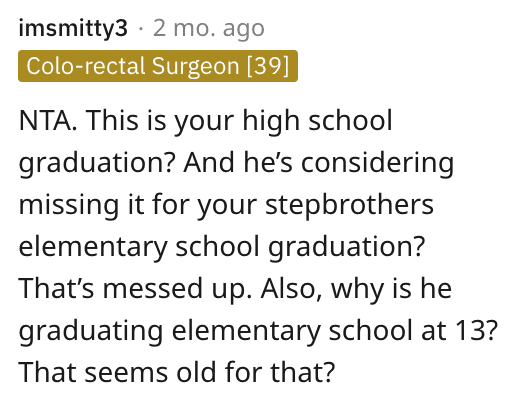 And this Reddit user said that this young woman should not let money play a role in her decision about this. 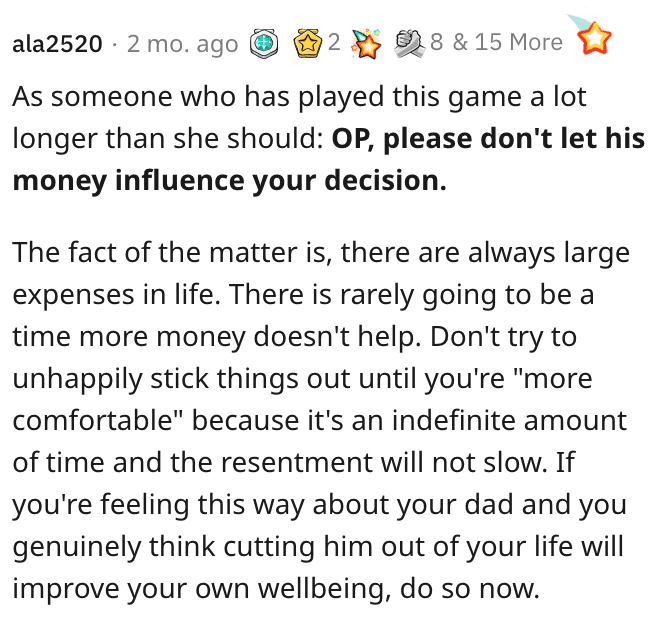 Finally, another individual disagreed and said that she SHOULD let money influence her decision. 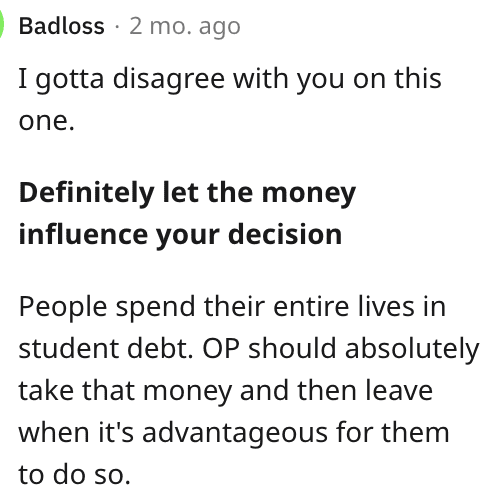