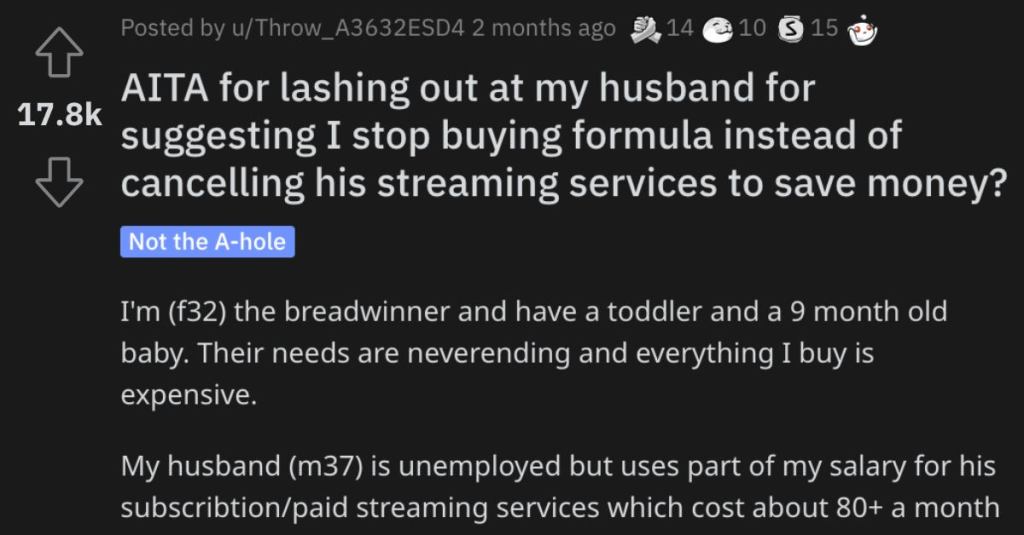 She Yelled at Her Husband Because He Said She Should Stop Buying Formula Instead of Cancelling Streaming Services. Was She Wrong?

I don’t want to sound too judgmental, but this guy sounds like a real winner!

Okay, maybe I am being too judgmental…but that’s what you’re supposed to do when you read stories from Reddit’s “Am I the A**hole?” page!

And now I want you to check this story out so you can draw your own conclusions!

AITA for lashing out at my husband for suggesting I stop buying formula instead of cancelling his streaming services to save money?

“I’m (f32) the breadwinner and have a toddler and a 9 month old baby. Their needs are never ending and everything I buy is expensive.

My husband (m37) is unemployed but uses part of my salary for his subscription/paid streaming services which cost about 80+ a month for Hulu (premium) Netflix, HBO, Amazon,ESPN+ and more.

I keep finding myself coming up short with money. I kept neglecting buying hygiene products and have only one pair of shoes that look decent. I can’t remember the last time I bought anything nice for myself and keep feeling guilty just thinking of going shopping for stuff that is necessary. I sat him down for a discussion and told him his subscriptions are taking money I can’t keep paying for them when I have other responsibilities.

I asked him to choose one channel and he threw a fit calling me ridiculous to think streaming services are the reason I’m always short on money and blamed it on the “expensive” and “unnecessary” makeup he calls it “fakeup” I keep wasting money on. I got angry and said he needed to respect that makeup is part of my personality and won’t quit buying and wearing it.

He said that I was trying to financially control him since I got offended when he pointed out that I waste money on makeup and explained that he can not and WILL NOT be bought with money no matter how desperate he is.

I said ok then let me cancel all streaming services and keep one til he can pay for them once he finds a job but he refused and said since he’s the stahp then those streaming services are a right and not a privilege and I should keep paying for them without complaining since he’s staying with our sons all day and it’s taxing just like my job.

Final straw was when he suggested I stop buying formula and go back to breastfeeding since that is unnecessary and expensive. I was floored and was seething I lashed out at him asking him if he literally thought cancelling formula is better than his precious subscriptions. Also I work I have no time to breastfeed.

He just said he doesn’t know what it is anymore and that I was pushing him but I told him he no longer has the choice and I’ll just stop paying for all his channels/subscriptions altogether which had him reply that I was being unfair and un-appreciative of his efforts. He stormed off after calling me controlling and kept cold shouldering me.

One reader said that this guy sounds like he’s not contributing anything to this marriage. 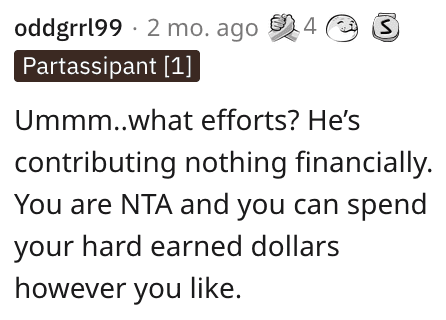 And another Reddit user had a bunch of good advice for this woman. 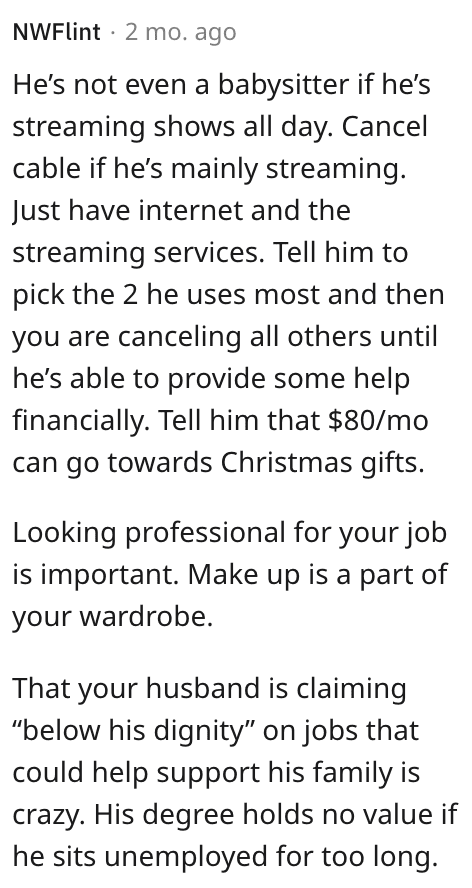 And another individual said that this woman needs to get a lawyer involved ASAP. 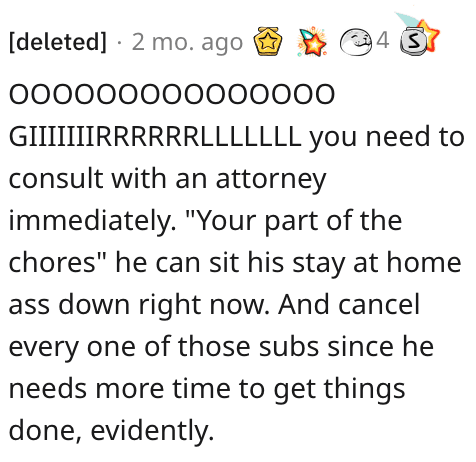