Jogger Gives Homeless Man His Shoes and Walks Away Barefoot. Then Comes a Job Offer.

A New York City man affected by homelessness saw his life change when a jogger did something thoughtful.

Joe Arroyo, 30 years old and without a permanent home, was sitting on the sidewalk holding a sign saying he was homeless, hungry and wearing worn out shoes.

The sign caught the eye of another man jogging by. The jogger stopped, took off his own shoes and socks and handed them to Arroyo. Then, barefoot, he walked away.

It was 9am in the WTC area, I watched as a jogger took off his sneakers, gave them to a homeless man, & walked the NYC streets barefoot.

“Our character is what we do when we think nobody is looking.” ❤️ pic.twitter.com/LT9dnMdHo0

Sitting nearby in a taxi, a woman witnessed the encounter and caught most of it on her cell phone camera. She uploaded the video to social media where it was viewed by tens of thousands of people.

News outlets around the city took notice and found Arroyo who took the opportunity to publicly express his gratitude about the surprising kindness behind the shoe incident.

“I never thought somebody would come out and take their shoes off and just give them to me.”

He said the man told him,

“I’ve been blessed my whole life, God has been very nice to me, I feel like I should bless you too.” 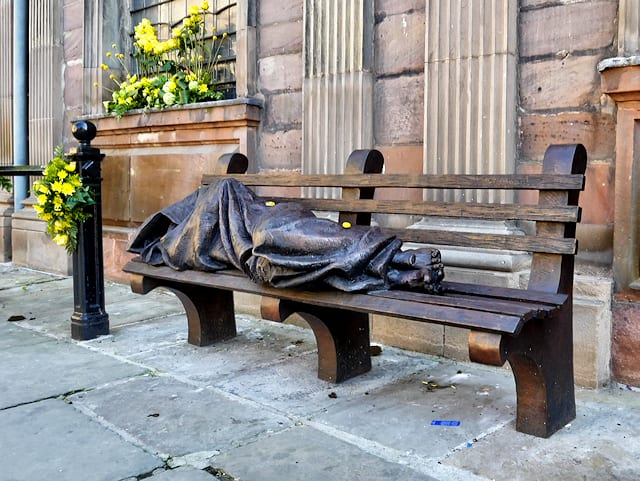 Arroyo was obviously touched by the generosity.

“I wanted to hug the guy but a homeless man hugging someone out here is not normal.”

He also asked viewers about any available jobs.

Incredibly, one of the city’s entrepreneurs saw the interview and asked the news station how he could contact Arroyo with a job offer!

Andrew Zurica, a successful entrepreneur, saw our story and wanted to help. On Thursday the two men met for the first time and Zurica offered Arroyo a job.

It doesn’t take much to change someone’s life, but being kind can make the biggest difference.