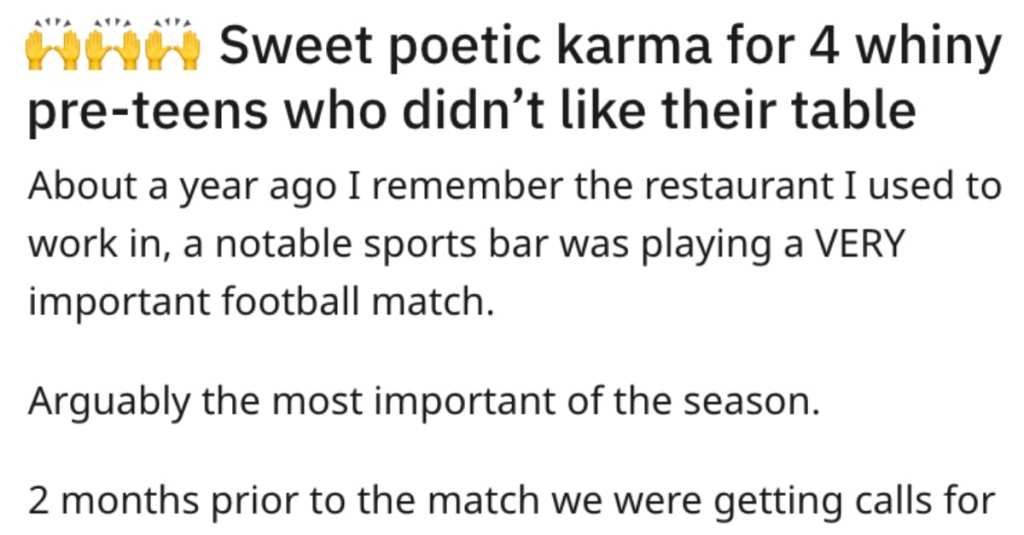 Some kids just don’t learn from their parents (or others) how to behave when they go out to a restaurant.

And four young kids who didn’t like where they were seated got a bit of a lesson about courtesy at an establishment.

Sweet poetic karma for 4 whiny pre-teens who didn’t like their table.

“About a year ago I remember the restaurant I used to work in, a notable sports bar was playing a VERY important football match.

Arguably the most important of the season.

2 months prior to the match we were getting calls for reservations and by the final week we had every table booked. Now something you should know about our restaurant is that it is set up quite oddly. Some tables have a better view of our TVs whereas others don’t. That’s compensated somewhat by the availability of two pull down projector screens.

Anyway, this particular story relates to such a table. If you imagine walking into this restaurant, the table is facing horizontally to the nearest TV. So, without the projector screen there would be two guests with their backs to the action.

Then arrives the guests, everything seems to be going fine. They arrive early, and I take them to their table. The lead of the group, let’s call him Chad obviously isn’t that much impressed.

Chad: How the f*ck are we supposed to watch the TV?

Frankly I’m a little bit taken aback by his language, but given its game day and its understandably frustrating (from his point of view he probably isn’t aware of the projector screen).

That’s when he interrupts.

Chad: Can we sit over there?

He’s pointing to a 8 seater booth. I know why – it’s because it has arguably the best view of our biggest TV. Nevertheless, his is a 4 man booking and that 8 seater is obviously already booked.

Me: That table is booked, as is every other-

And again with another interruption.

Chad: Well f*cking put someone else here. We want to sit there.

Baring in mind his 3 other mates are silent throughout. In retrospect they are all arguably so much more polite than this bag of pus.

Me: Well that wouldn’t be fair, now would it? Now if you let me explain-

Chad: No f*ck this and f*ck you. I’ll take my money elsewhere. Cancel my booking.

I very nearly laughed at that last bit, because I know why he made such a big deal about the larger table now. I would later find out that this particular cretin is stinking rich. He has daddy’s money. But oh well, one booking cancelled. No sweat. The 3 boys leave led by the walking testicle. That’s when the next group of customers really turns the situation well around.

Customer: I’m sorry, I couldn’t help overhear that they cancelled their booking? We haven’t booked, and we’re 4 persons. Can we have their table instead?

This is exactly why one cancelled booking for me on a busy day like this is no sweat. One persons trash is another’s treasure – so to speak. I happily sit the 4 men down, and the guys actually cheer when I bring the projector down.

That’s when it happens.

Testicle McDoucheface rounds the corner and spots the projector. He re-enters the queue for tables and waits his turn. By the time he’s up front, I can barely hide my grin.

Chad: So…we changed our mind (meaning he changed his mind and now wants the table now he realizes that nowhere else in the city has vacancy).

Me: I’m afraid your tables already been given away.

Chad: But we reserved!

Me: Yeah, and you also communicated to me just now that you wish to cancel. I’m afraid your table was already given away.

Chad: You know, that’s a really bad business practice. You should honor your commitments to reservations.

Me: Aslong as the reserving party wishes to remain. Which you did not communicate to me at all.

I then leave the host stand and tend to that table. All the while Chad is given me a look that I can only describe as ‘I f*cked up, but internally I’m gonna make sure this is all your fault’.

Let’s see how folks reacted to this story on Reddit.

This person said that this was sweet, sweet revenge. And also, to Hell with Chad!

Another reader said that the night was probably a good one after the ringleader of the group took off. 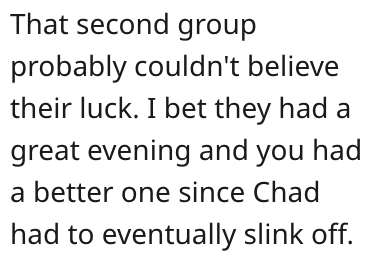 And here’s an obvious take on the story.

Finally, this reader was totally on board with this story and it left them feeling A-OK! 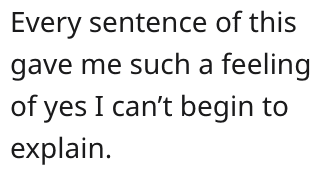 We want to hear from more folks in the service industry!

Tell us about your worst customers in the comments.