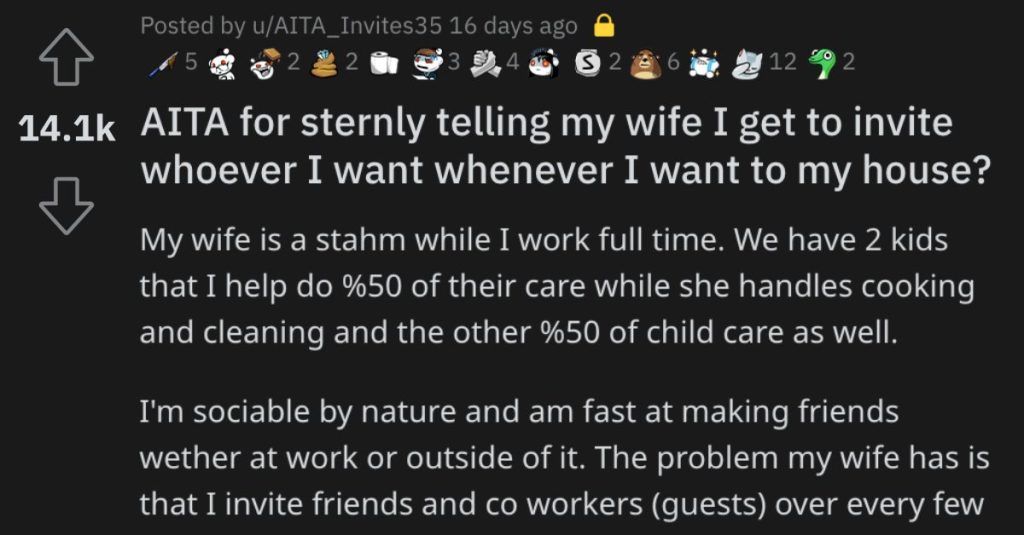 It’s my house and I’ll do what I want to!

Is there trouble in paradise?

It sure seems that way…but you need to read the whole story in this post from Reddit’s “Am I the A**hole?” page to get all the facts.

Check out this story and you be the judge.

AITA for sternly telling my wife I get to invite whoever I want whenever I want to my house?

“My wife is a STAHM while I work full time. We have 2 kids that I help do %50 of their care while she handles cooking and cleaning and the other %50 of child care as well.

I’m sociable by nature and am fast at making friends wether at work or outside of it. The problem my wife has is that I invite friends and co workers (guests) over every few days to my house for dinner or lunch. Restaurants aren’t an option now due to budget.

My wife said she has to cook for my guests though I never tell her to cook this or cook that nor ever complain about her choice of meals because it depends.

The guests eat whatever she feels like cooking yet she complains that she has to cook for extra people which takes effort and time and also since I sit with the guests then she has to serve them by bringing coffee/preparing the table/etc since I told her I don’t do these chores but I thought that since this is her area of responsibilities then where’s the problem?.

I invited few guests for Thanksgiving, 6 people and when she found out she lost it saying I should’ve consulted her first. I said there was no need because they’d just eat whatever she cook no problem but she said she wasn’t going to agree to cook large portion and for 6 extra people aside from serving them and handling hosting that is too much for her.

I told her she was making a big deal out of it and should just stop freaking out over few extra plates and glasses and whatnot. She said she didn’t agree but then I eventually had the guests over and after they left she started yelling at me saying she was not mine and my guests server and that I should stop having them over that is when I told her very sternly that it’s my house and I get to invite whoever I want whenever I please and called her unreasonable to react like that instead of being welcoming to the people who wanted to spend time with us.

Unlike her family who cut us off completely but she shouted that she was done with being on my beck and call and having to be forced to take care of my guests in terms of serving and cooking just because it’s her part of chores and told me if I want to continue to have guests over then I’ll have to step up and cook for them myself which I thought was quite rude and unfair of her.

We went back and forth in this argument and she then stopped talking to me and started giving me the silent treatment making me feel like I’d committed some sin by having guests over.

INFO – I just wanted to explain that my wife’s main issue isn’t about cooking itself but having to cook extra for the guests which is understandable and I tried to compromise by suggesting we set time limits for when my guests visit to avoid having to include them in dinners and whatnot and also suggested we limit the frequency of those visits.

But she stated she will still have an issue with it and gave me the options of either handling the hosting myself or just completely stop having them over or take them out to restaurants but then restaurants consume money and she was the one who advised against going to restaurants.

Also, the reason I said it’s my house I meant that it’s my house too and not as if it’s mine alone or hers alone. My wife has huge part in it and she definitely gets a say in what goes on and what doesn’t and we don’t usually disagree except for this issue.”

This person said that this guy is treating his wife like an employee and he’s definitely the a**hole. 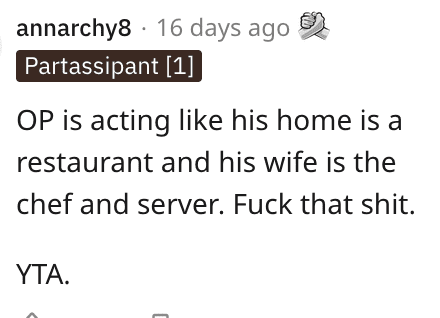 And this reader said that he springs this on his wife all the time so she never has any downtime. 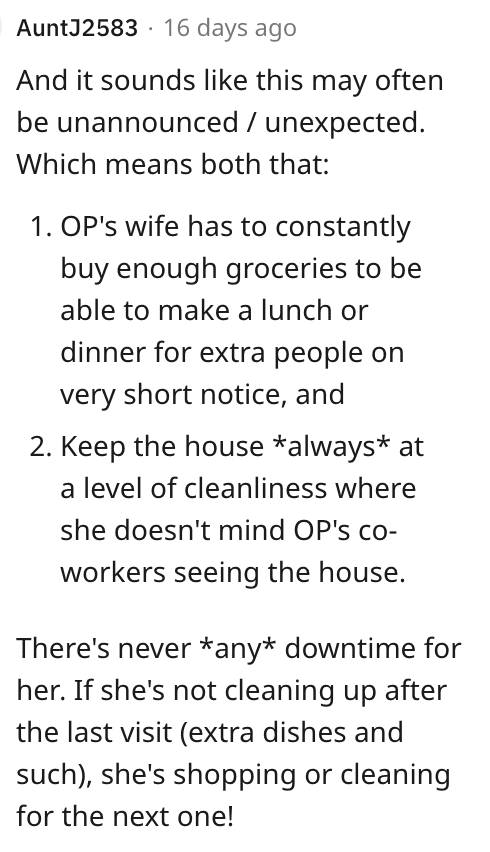 Finally, this reader said that this guy takes being a bad husband to a whole new level. 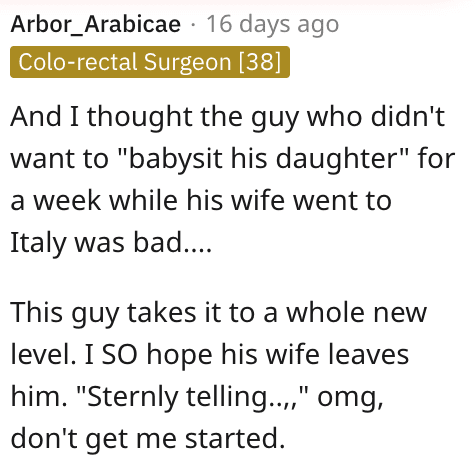