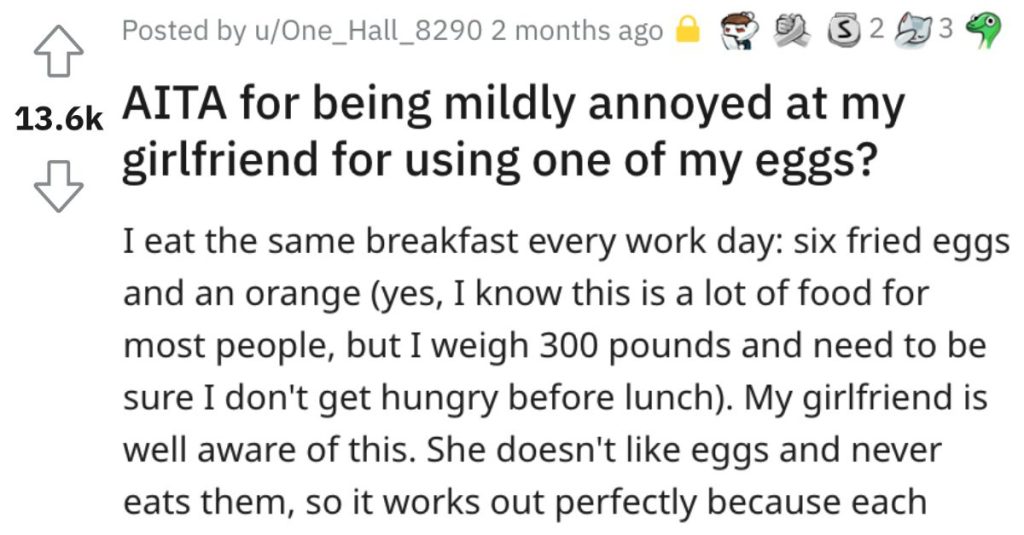 Sounds kind of ridiculous, doesn’t it?

Perhaps…but let’s read his story and see what’s going on here before we make up our minds.

AITA for being mildly annoyed at my girlfriend for using one of my eggs?

“I eat the same breakfast every work day: six fried eggs and an orange (yes, I know this is a lot of food for most people, but I weigh 300 pounds and need to be sure I don’t get hungry before lunch).

My girlfriend is well aware of this. She doesn’t like eggs and never eats them, so it works out perfectly because each week when we go grocery shopping, I buy a 30-pack of eggs, which lasts exactly the week (6 eggs x 5 days = 30).

I work Thursday to Monday every week. This past Sunday evening (when I had six eggs left in the carton for Monday morning), I was in the shower and came out to discover that my girlfriend had used one of my eggs to make a cake.

I wasn’t really upset with her, but I was mildly annoyed because she knows full well that I was planning to eat it for breakfast the next day (and it was too late to go back out to get more eggs).

I asked her to please let me know next time we’re at the grocery store if she plans to need an egg that week so we can buy extra. She said I’m being ridiculous, that it’s just one egg, and that she shouldn’t have to plan everything ahead like that.

Again, I want to emphasize that I’m not actually mad at her, just mildly annoyed. But she seems to think even that’s an overreaction.

This reader said he’s an a**hole and he shouldn’t be using his weight as an excuse. 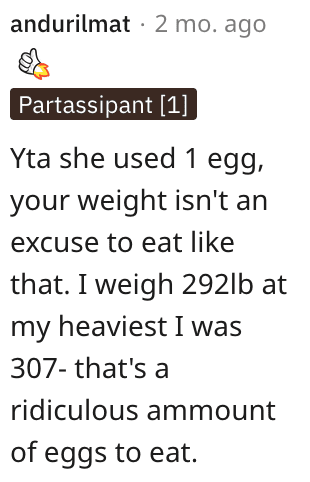 Another individual agreed…and they really laid the egg puns on HEAVY.

And another Reddit user said he’s an a**hole and that he should consider some other food to eat.