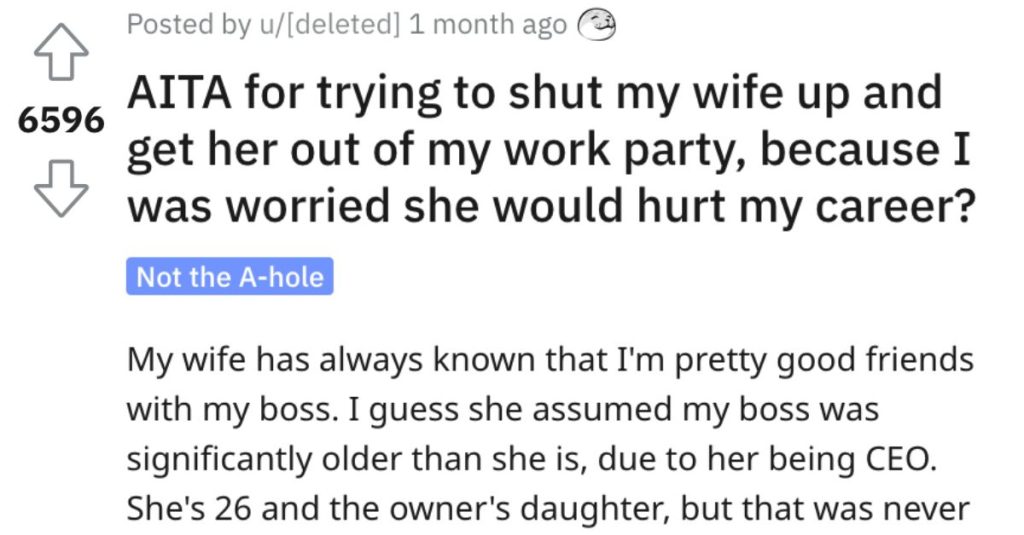 Do you have someone in your life who embarrasses you when you bring them to parties?

Maybe a partner, a spouse, a sibling, even a parent?

It can be a real dilemma what to do with them at events, especially when it’s a work party.

Check out this story and see if you think this guy was wrong for how he treated his wife at a work party.

AITA for trying to shut my wife up and get her out of my work party, because I was worried she would hurt my career?

“My wife has always known that I’m pretty good friends with my boss. I guess she assumed my boss was significantly older than she is, due to her being CEO. She’s 26 and the owner’s daughter, but that was never clarified.

Recently we had a party to celebrate a large accomplishment for the company. This was just a chill thing at a bar, so I told my wife if she didn’t want to come it was fine, because she does sometimes get anxious at events like that. She wanted to come and it was her first time meeting my boss.

She was shocked at how young she was, which I get. When most people picture a CEO, they are probably thinking 40 plus, but she was p**sed at my boss’s outfit. She was wearing a crop top, which kind of looked like just a lacy bra, but with wide leg pants and heels.

After a few drinks, she was trying to tell me how much she hated my boss, because of her outfit, because she hugged me, and because she was “sitting on some guy” which I didn’t see that part. I was freaked out that someone was going to overhear and it was going to get back to my boss. I told my wife I wanted to leave, but she refused. She was fine for a couple minutes and then she began again with “maybe I’m just crazy or old fashioned but her outfit…”

Maybe I’m an AH but I had to get her out of there. I spilled a drink on her and convinced her it was time to go. she h**es being dirty, so she went willingly. I think she knows I did it on purpose and she is p**sed, and she feels that I put my career before her.”

This reader said this guy is NTA and that he did the right thing by getting his wife out of there.

But this reader thinks this guy hasn’t been up front with his wife regarding the truth about his boss. 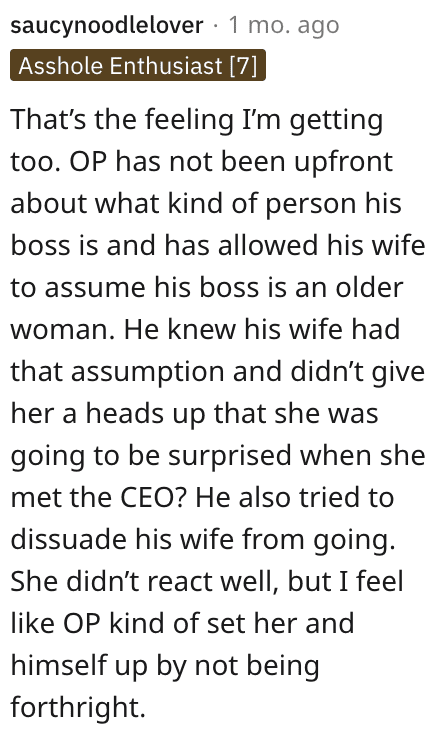 And this individual believes that everyone sucks in this story…get the details about what they said below. 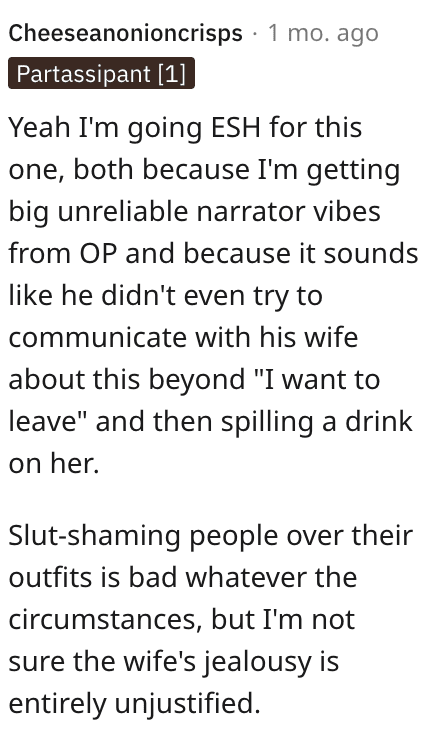