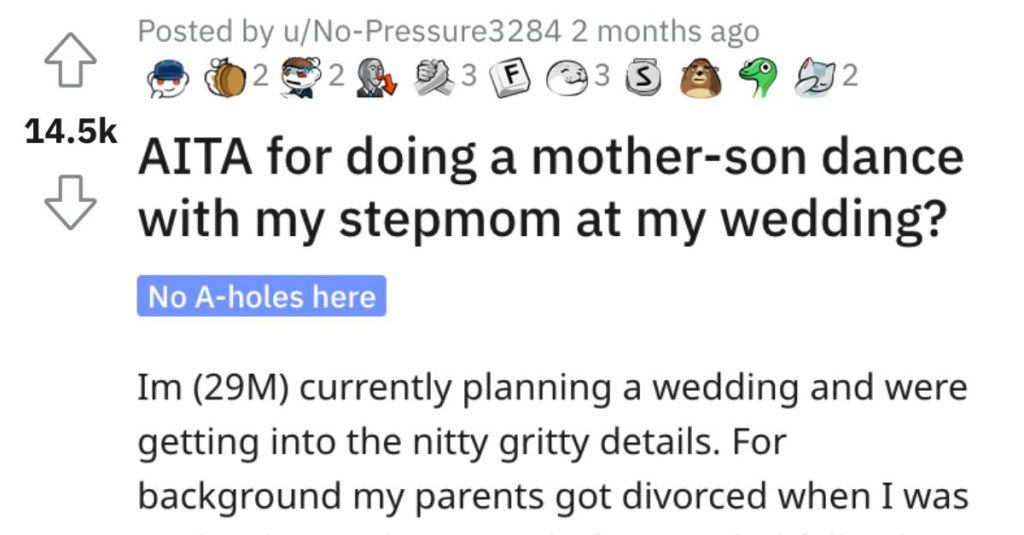 We’re about to dive into yet another story from Reddit’s “Am I the A**hole?” page that deals with a mother-son dance…and the drama revolving around it.

But this one has a bit of a twist!

Read on to get all the details and let us know what you think about it in the comments!

AITA for doing a mother-son dance with my stepmom at my wedding?

“I’m (29M) currently planning a wedding and were getting into the nitty gritty details. For background my parents got divorced when I was 5.

The divorce happened after my dad fell in love with his current wife/my stepmom Alice. They claim they didn’t cheat but waited to be separated before anything physical happened. I dont know or need to know whether thats true at this point.

My dad and Alice got married and were living together by the time I was 7. They had my two siblings within the next 4 years. My parents had split custody and Alice was 100% a mother figure to me. We are very close, she’s been there for me for every tough moment of my life.

She also helped pay for my college and grad school which Im extremely appreciative of. My mom is a good mom but we’ve never been as close as I am with my dad and Alice. Our personalities are just very different.

We’re planning the first dances right now and have my first dance with my fiancee and she has hers picked out with her dad. Her parents are still married so there’s no drama there. Being so close to Alice, I really dont feel right excluding her and only doing a dance with my mom, so I asked her if she’d be comfortable doing one with me as well.

She was overjoyed and cried with emotion. Im really excited for it. But once my mom found out she flipped out. Said Im replacing her like my dad replaced her. I told her its not a replacement but she’s been so supportive of me my entire life and I consider her a true “bonus mother” so I dont want to exclude her. She doesnt want to accept that.

Yesterday my aunt (mom’s sister) called me and ripped me a new one. I know its a little controversial but in my heart its what I really want to do. AITA for going through with this and having two mother son dances?

Personally, I’ve been to a few weddings with steps involved where there were two mother son or father daughter and it seemed really sweet, not like overkill. I would do shortened versions of the songs so it wont be too long if that matters.”

One person said he’s NTA and that this was his choice.

And this Reddit user said everyone sucks here. EVERYONE.