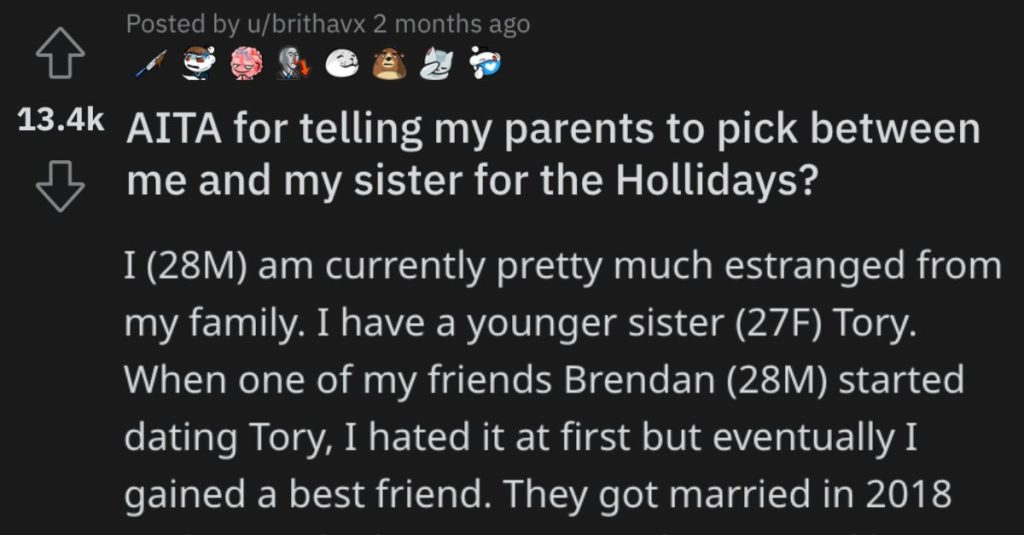 The choice is yours!

Uh oh…that doesn’t sound too good, does it?

But you never know what you’re gonna get on Reddit’s “Am I the A**hole?” page!

Check out this guy’s story and see if you think he went too far with the ultimatum that he gave his parents.

AITA for telling my parents to pick between me and my sister for the holidays?

“I (28M) am currently pretty much estranged from my family. I have a younger sister (27F) Tory.

When one of my friends Brendan (28M) started dating Tory, I h**ed it at first but eventually I gained a best friend. They got married in 2018 and I was the best man. Brendan is now like my brother, we are that close. In 2020 Tory left Brendan for another guy. Reality Tv type s**t.

My parents were incredibly upset, as was I. My sister moved in with the guy immediately. My parents knew I was pissed but had to “support” their daughter. I went NC with Tory and LC with my parents.

In 2020 when Tory’s second wedding happened, I didn’t go. Me and my dad had it out over it. My mother tried playing peacekeeper for the family. My parents then started giving me the silent treatment. When 2020 Holliday season came around it was the height of Covid.

My parents said that I should just do my own thing this year. Because with me going out a lot, they didn’t want me spreading diseases. My exact response was “if you are worried about catching diseases from other people. Shouldn’t you be more worried about Tory. I mean she’s the one who likes to sleep around”. Me and my dad had another fight especially due to his “family over everything mantra”.

I hardly spoke to my family in 2021. My parents would send me text like “when you are ready to apologize” we’ll be here type s**t. I responded with a Bible verse about adultery and how they support it.

I was berated again and we hardly spoke until October of 2021. Last year I was told we were doing thanksgiving at Tory’s place and if I wanted to come I needed to apologize to Tory and her husband. I laughed and ended up going to Brendan’s family’s.

Where Brendan’s mom posted me with her family on FB and tagged me with a quote about “family being those you choose”. I never told her to post it. But my mom saw it and went apes**t. Asking for me to come over and talk and even commented on the post.

So this year my plan is to go to Brendan’s family again. My mom called and said she wanted to host this year. I asked if Tory and her husband would be there. She said of course they are family. I said “so was Brendan, but I saw how you treated him and me. So no thank you”.

Yesterday my dad called and said my mom is distraught and has been for years. She wants us all to get along, so I need to do the right thing. I said I’ll come if my sister isn’t invited. He said that he wouldn’t do that to family. I said he did that to me for 2 years. He claimed I did it to myself.

My mom is now saying it was my dad that has been the harda** about this the whole time. I said she should have divorced him then because I’m not putting up with his s**t anymore. Either my sister isn’t invited or I don’t come.

I’ve now had some extended family reach out and say my parents are upset and hurt. I said my parents were totally okay with not having me around for 2 years.

This person said that he’s an a**hole and he’s enjoying all this drama.

Another reader said he needs to grow up. 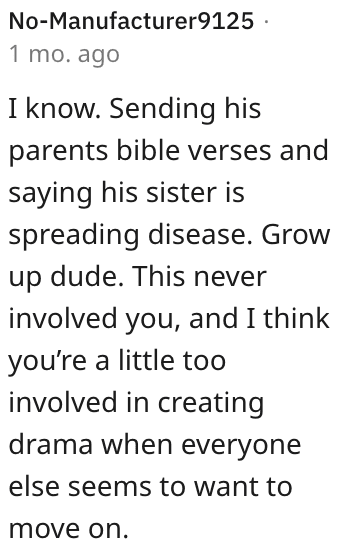 And this Reddit user said he’s an a**hole and his behavior is unhealthy. 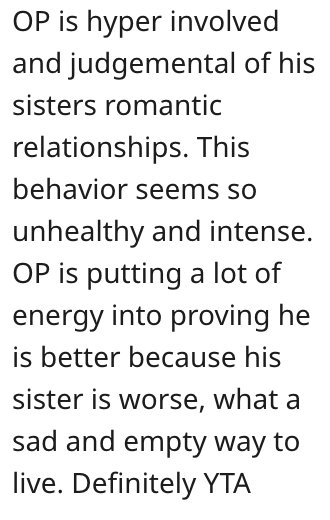