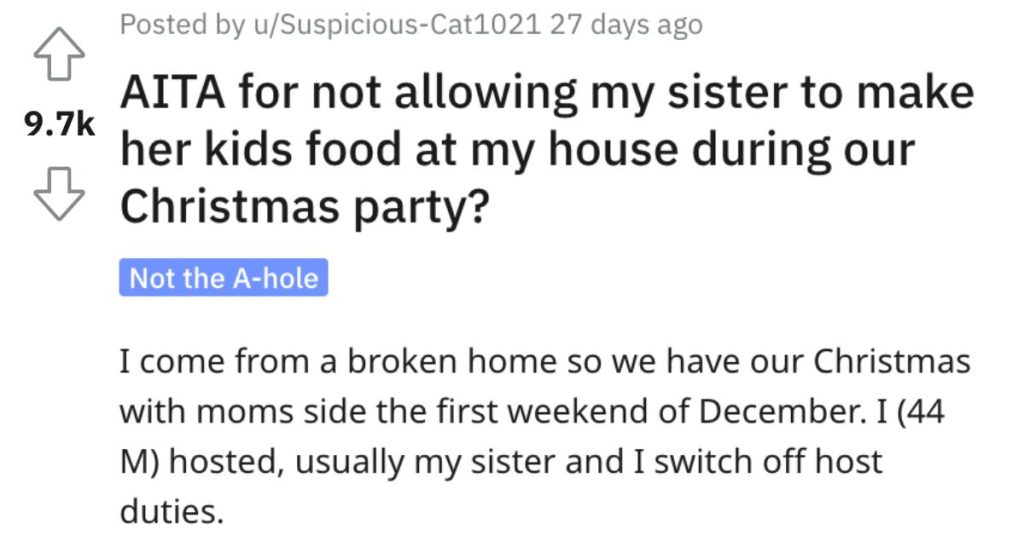 Hmmmm, this sounds like kind of a weird one…

You never know what kind of story you’re gonna get!

So check this one and out and let us know what you think about it in the comments.

AITA for not allowing my sister to make her kids food at my house during our Christmas party?

“I come from a broken home so we have our Christmas with moms side the first weekend of December. I (44 M) hosted, usually my sister and I switch off host duties.

My sister has 2 daughters who are incredibly picky eaters at 18 and 15 years old. My sister would come to family parties with a box of pasta and a bag of frozen chicken tenders that she will make for her daughters.

I want to know if I’m an a**hole for what I did here. I knew that is her drill with them, but I’ve always found it to be very annoying especially when I’m trying to cook and she’s taking up space making the pasta and chicken tenders.

This year I told my wife we will not be letting my sister in the kitchen this year and the girls will have the choice of eating what I prepared or not eating. My sister accused me of being a cynic and getting joy from watching the girls be uncomfortable. I told her they are old enough to eat like adults.

Also the food I make is pretty standard. I do a fillet roast, bbq ribs, cheesy potatoes, stuffed artichoke, breaded cauliflower, ratatouille, and a salad. Certainly some of these must be foods that an 18 and 15 year old should be able to eat.

Well the girls sat and ate bread and butter while telling me that my food looked gross. I looked to my sister to calm them down but the told me I deserved this and it’s not their fault for being picky eaters.

I know I could have just let my sister do her thing but it was the principle of the situation. I’m not sure if I was being a petty a**hole or if I had a legitimate reason to be upset.” 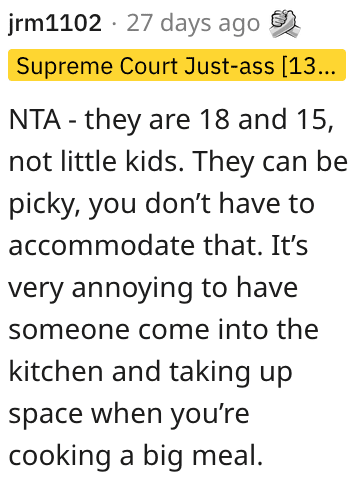 Another Reddit user argued that they actually had another option as well for what they could have done. 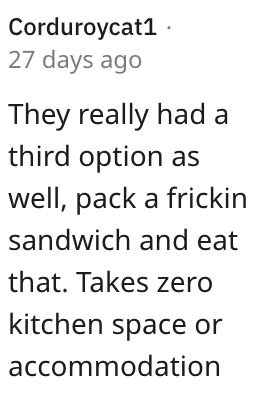 And this Reddit user said it sounds like these kids just don’t know how to be good guests. 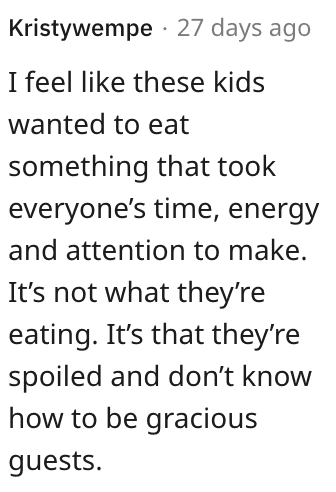