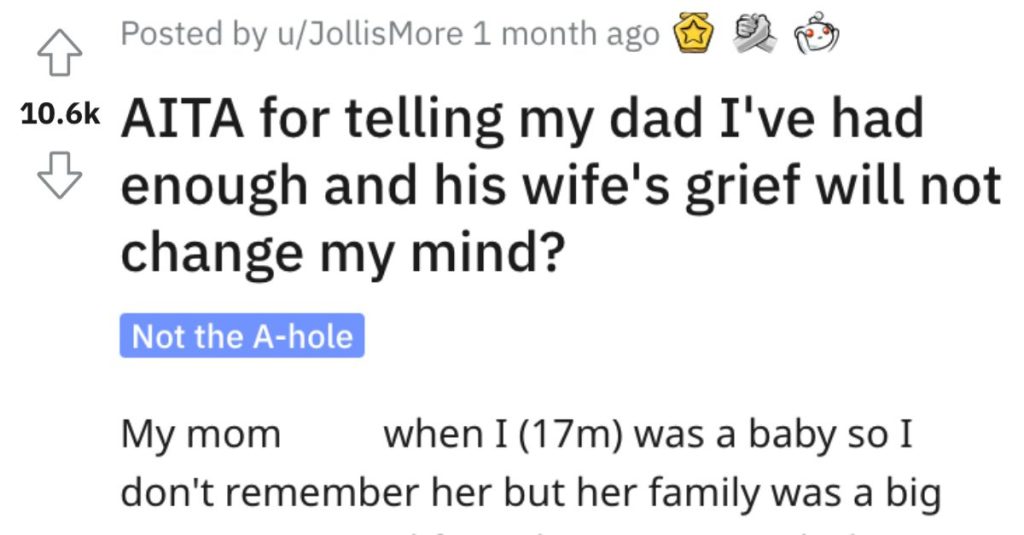 He Told His Dad That His Wife’s Grief Won’t Change His Mind. Is He a Jerk?

Well, right off the bat, I’m gonna say that this sounds like a pretty complicated and strained family situation…

But is this young man an a**hole for what he said to his dad or was he justified?

Check out his story below and see what you think.

AITA for telling my dad I’ve had enough and his wife’s grief will not change my mind?

“My mom d**d when I (17m) was a baby so I don’t remember her but her family was a big presence in my life and I vacation with them every summer (2020 excluded). Dad met his wife when I was 7.

They were together for 6 months when she told me she loved me (after meeting her three other times before that) and she could not wait to give me another mom. I told her I didn’t want another mom. She was sad but said she understood.

They married a few months after that and then when I was 9 she and my dad sat me down and told me she wanted to adopt me and that she loved me so much and her dream was to be my mom. I told them I still didn’t think of her as my mom.

She asked if I loved her enough to try, to give it a shot and we could wait on the adoption until I was ready. I said I didn’t want to. She then said to do it because I loved her. Dad said there was no woman more deserving. I told them I didn’t love her enough to let her be my mom. She cried. My dad told me he didn’t know why I was lying but therapy would help me see I loved her.

I did go to therapy. I didn’t change my mind on letting her be my mom/being adopted by her. So they tried to have a baby of their own. She was not able to get pregnant but they abandoned the idea of her getting her motherhood dreams out of me, which was good.

But she couldn’t get pregnant and so IVF was their next step. I’m not sure on all the details but they only got enough for one try and they waited and prepped her so the pregnancy would stick. She made it to 14 of 15 weeks and then she miscarried three weeks ago. It was bad. She was broken and she ended up staying in the hospital so they could help her.

My dad decided that now I need to give her what she wants. That 10 years of knowing her and 9ish years of her being his wife means she has been my mom whether I like it or not and I need to start showing her that I love and care about her.

He told me the adoption would mean the world to her and would be the biggest help while she grieves. I told him I had enough and his wife’s grief was not enough for me to let her adopt me. I told him I did not think of her as my mom, I did not love her, I was not a toy that could fill her motherhood desire.

I told him I’m a real person, his son and mom’s son and while I don’t know her, you can’t just ask someone to be adopted to give another person their dream. He told me he was disappointed in me and expected me to be more compassionate and loving to her after all this time.

One reader said he’s NTA and it sounds like this relationship has been sabotaged. 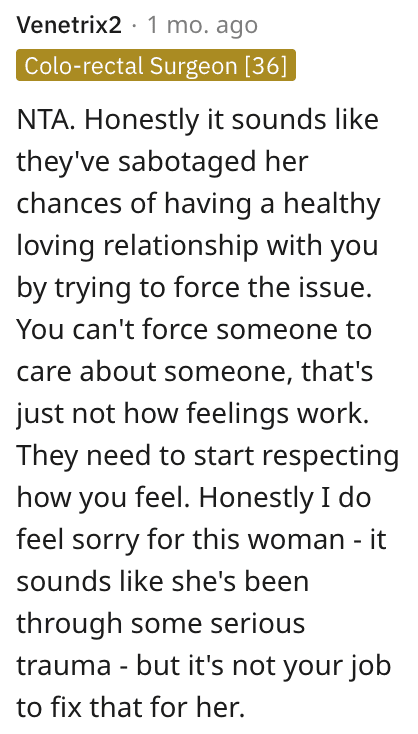 Another Reddit user agreed and said there wasn’t much compassion for this young man. 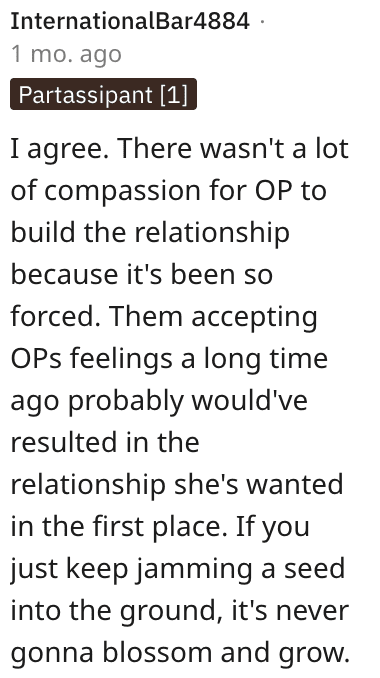 And this individual said he’s NTA and his dad and his wife are selfish. 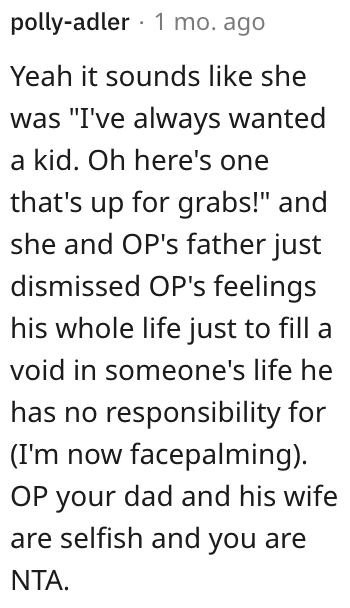