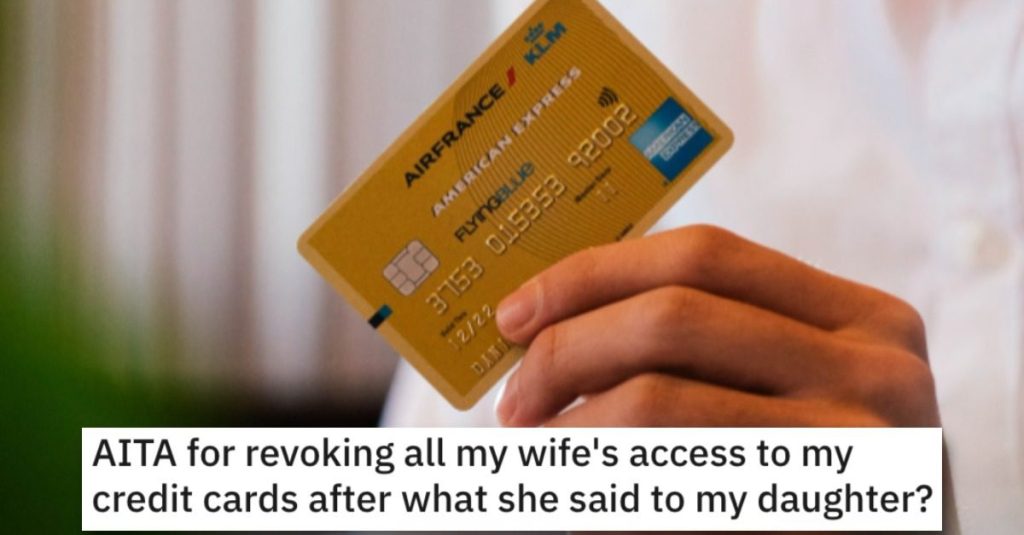 You insulted my daughter?

Is this guy being a little too harsh?

Or did his wife have it coming?

Check out this story and see what you think.

AITA for revoking all my wife’s access to my credit cards after what she said to my daughter?

“I’m a father of 2 daughters, 12F bio “Chloe” and 14F “Hope” adopted. Their mother and I are separated. I remarried to my current wife “Jenna”.

After getting overwhelmed with busy work schedules, and started asking Jenna to handle daily and weekly expenses including taking the girls to the mall and buying what they want.

I always make sure my credit cards are full and ready. especially, when she tells me what the girls need.

I have realized recently that Chloe has bought quite a lot of stuff, But Hope hasn’t. I tried having conversations with her about it and asked if the mall her stepmom takes her to is not good, or the stuff she finds there isn’t nice and all that. She refused to give a direct answer. I didn’t push it, but let her know that I was always there to hear her out.

After 5 days, I was at work and Hope sent me a 37 minutes long recording of her trip to the mall with her sister and stepmom. I listened to it after getting off work and what I heard was unexpected. I heard Hope telling her stepmom that she liked a backpack and wanted it but Jenna’s response was to tell her that there wasn’t enough money.

Hope insisted saying that she (Jenna) had enough money but Jenna told her she still had to buy stuff for her sister. Hope insisted which made Jenna snap and tell her “why don’t you go look for bio dad and ask him to buy it for you if you want it so badly”. I was shocked. I had to stop the recording. I couldn’t keep listening because of how upset I was.

I immediately rushed downstairs where Jenna and the girls were, and had the girl go upstairs the went off on her about what I found out. She kept denying saying it so I had her listen to the recording. She said she didn’t mean it this way and that her words were obviously “taken out of context”.

I berated her for treating Hope like that and told her that she gets whatever she asks for regardless of who her father is….I then went and revoked all access Jenna had to my credit cards…every single one of them. She found out and blew up saying that I was being unfair after all she’s done to help me out with in this area. I said I didn’t want to hear it and she kept yelling then went to stay with her sister.

We haven’t spoken to each other since that day. She keeps talking to Chloe though. SIL thinks that revoking her sister’s access to credit cards is actually “a**se”.”

One person said this guy is NTA and he should think about getting a divorce.

And this reader agreed and said that his daughter probably needs to get some therapy.