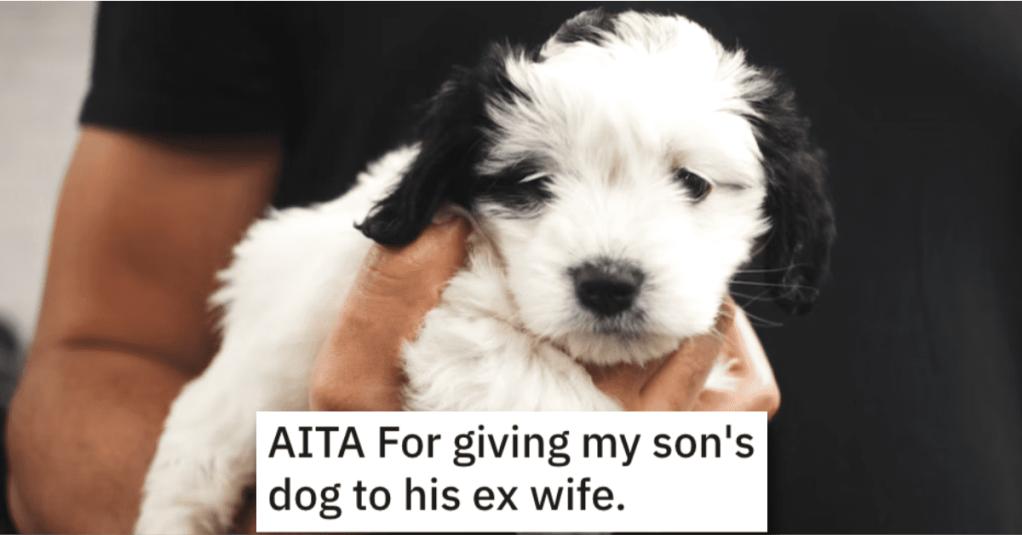 She Gave Her Son’s Dog to His Ex-Wife. Is She a Jerk?

There are bound to be at least some kind of hurt feelings if a pet is given away.

But that’s what we’re dealing with here, people!

Check out the story below and see if you think this woman did the wrong thing.

AITA for giving my son’s dog to his ex-wife?

“To begin with I love my son with all my heart. But he blew up his marriage by cheating and has moved back home.

My oldest just got married to a wonderful man. My younger daughter is going to grad school overseas and that leaves my son. Let’s call him Carlos.

He has always been a handful. He got married when he was 20. His ex wife had a three year old daughter whom I love and no matter what I am her grandmother. They had a child together, my other grandchild. He is two.

COVID caused a lot of stress in his life and he works in a fly in fly out camp job. He is gone for two weeks at a time. Then home for two weeks. He makes very good money and enjoys spending it. Maybe a little bit too much.

Carlos cheated on his wife with a coworker. I am not judging him. I am not perfect. But he chose to leave his wife and children. And move back home. It doesn’t really make sense for him to rent an apartment or something for the 12 days a month he is home. So I allowed it. But he decided to be an a**, in my opinion, and bring his dog with him.

My grandbabies love this dog. But he is trying to punish his ex for telling him to leave.

It is a beautiful border collie and it is the perfect dog for their home. Huge yard, lots of walking trails nearby, even an off leash park only a ten minute drive away.

I live in an apartment downtown. I am allowed a dog but if I were to have one it would be something sedate and non shedding like a Maltese.

I swear I tried watching this dog. But my son is irresponsible. He doesn’t walk him much. He doesn’t brush the dog. He is just holding on to the dog to lever his way into his ex’s life.

The last straw was this last time off work. He was away for two weeks, Nd then came home for one day before flying off to the United States for a vacation with his new girlfriend.

So I called my DIL, checked that she wanted the pup back, she almost cried with joy, packed up everything that belonged to the dog and took him over there. My grandchildren were ecstatic.

My son just came home for three days before he has to leave for work and asked where his dog is. I told him the truth.

He is calling me an a**hole for giving away his pet. Also because I said that if he tried to go get the dog and bring it back he was not welcome in my home.

This reader said she’s NTA and that her son is only thinking of himself. 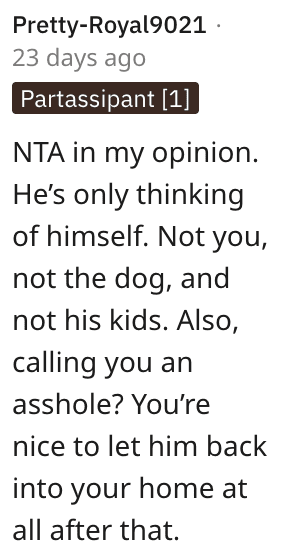 Another Reddit user said she made the right decision and she’s NTA. 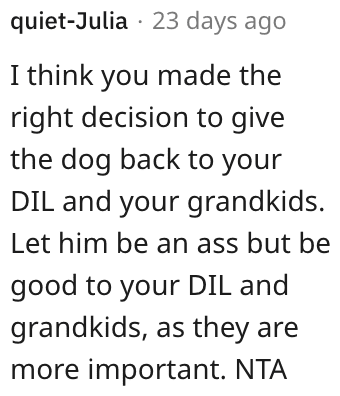 And this individual said he can go see the dog when he sees his kids.