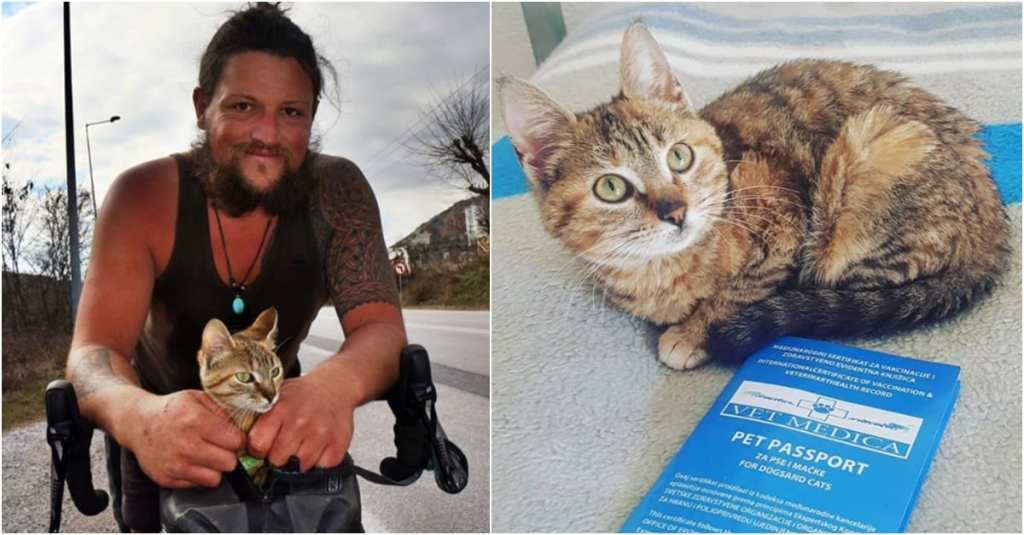 Dean Nicholson was tired of working his 9-to-5 job as a welder so he decided to set out on an epic journey. The 31-year-old from Dunbar, Scotland decided he was going to cycle around the world by himself, beginning in September 2018.

He was well into his trip, crossing the border from Bosnia into Montenegro, when something unexpected happened. As Nicholson was ascending a steep hill, he heard a meow behind him and decided to investigate. He found a little kitty and, as we all would, stopped to pet her before resuming his trip.

But the kitten was so affectionate that Nicholson immediately felt a connection with the stray. He reasoned that she must have been dumped there because she was obviously very hungry and in the middle of nowhere. So, he did what he had to do: He took the cat to a vet and decided he now had a traveling partner for his journey.

And he named her Nala.

So just as i was coming up to the Montenegro border i heard this little gem meowing her heart out chasing me trying to get my attention. We were about 12 miles from the nearest town so it was obvious someone had dumped her. A quick re-shuffle of my bike equipment she is now sitting happy up front leading the journey! She needs a name so Feel free to fire suggestions guys ?

Everybody meet Nala ? After a trip to the vet today, he reckons shes about 7 weeks old and in need of a good feed. Treated for worms and back on monday to get chipped and a rabies shot then fingers crossed we can get her through the borders! ??‍♂️?

The two have become the best of friends and are experiencing the trip of a lifetime together. Nala did get sick during one point in the trip, and the two relaxed at a hostel for several weeks while the feisty feline recovered.

Who said cats were scared of water? ???

⠀⠀⠀⠀⠀⠀⠀⠀⠀⠀⠀⠀ After travelling to Albania to see the puppy the other day, on the journey back the bus got stopped at customs and every part of it was searched…. twice!! ⠀⠀⠀⠀⠀⠀⠀⠀⠀⠀⠀⠀ This got me thinking about crossing borders with Nala and how she isnt so easy to hide anymore. So the next few days i looked into everything she needs for making it across the world and turns out its a quite a bit. Every place differs from the next, Some are pretty easy and others just want to make it difficult for some reason. Maybe im just overthinking it all but last thing i want is to have her taken from me at some border point because shes missed a jag and chucked in quarantine for however long at my expense. ⠀⠀⠀⠀⠀⠀⠀⠀⠀⠀⠀⠀ Tomorrow though we are getting the titer test done to prove she hasnt got rabies, this involves taking a sample of her blood and sending it to be analysed at a lab in Athens. This can take upto 30 days to receive the results but at least it lets us into some countries! ⠀⠀⠀⠀⠀⠀⠀⠀⠀⠀⠀⠀ Feeling a bit deflated with it all but im going to get back on the bike tomorrow and see if cycling clears my head ✌ • ⠀⠀⠀⠀⠀⠀⠀⠀⠀⠀⠀⠀ • ⠀⠀⠀⠀⠀⠀⠀⠀⠀⠀⠀⠀ • ⠀⠀⠀⠀⠀⠀⠀⠀⠀⠀⠀⠀ • ⠀⠀⠀⠀⠀⠀⠀⠀⠀⠀⠀⠀ • ⠀⠀⠀⠀⠀⠀⠀⠀⠀⠀⠀⠀ #adventurecat #shouldercat #cat #?#travelnomad #traveltheworld #worldbybike #worldtraveller #biketheworld #cyclinglife #adventurebybike #adventure #adventureseeker #travelblogging #beautyofcycling #cycletheworld #greece?? #travel

The two continue to travel the world together, and, we have to say, we’re all a little envious of this excellent adventure.

Check out Nicholson and Nala’s GoFundMe page and their Facebook page as well!