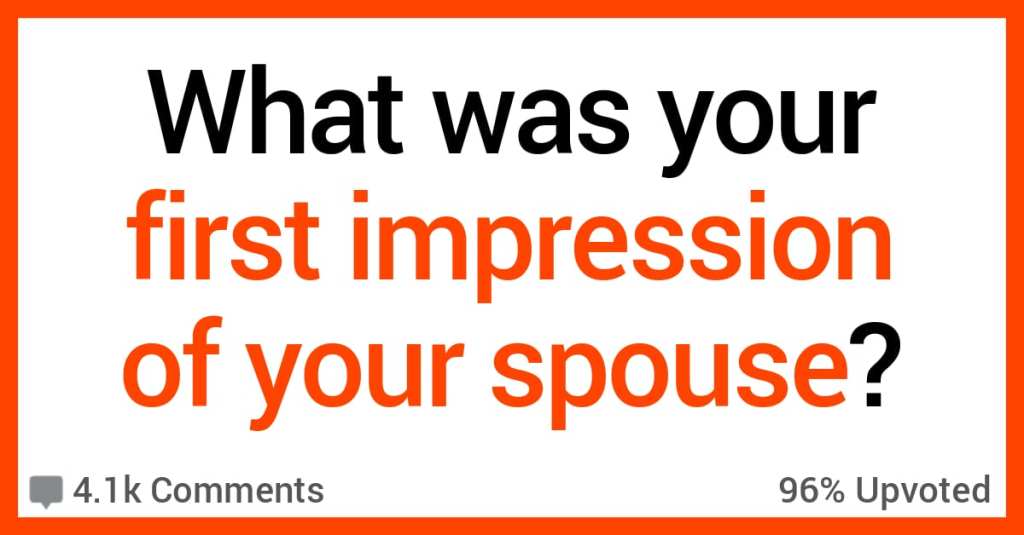 Married People Admit What Their First Impressions Were of Their Spouses

My mom likes to tell the story about when she and my dad met.

They got set up on a date…and my mom wasn’t super crazy about him that first date.

But, like a lot of great love stories, my dad was persistent, he turned on the charm, and the rest is history.

People on AskReddit reminisced about their first impressions of their spouses.

“She came to our friends group complaining she spilled some acid on herself in the chemistry lab.

Also, we shared some M&Ms.”

He’d just walked through the door of the little dive bar we were meeting at. (We’d “met” on a video dating service and it was our first face-to-face.)

That was 29 years ago and I still think he is hella cute.”

“Thought he was the biggest *sshole I’d ever met.

His grandpa had just died and he was really hurting. He is actually a lovely dude. He has had his moments, who hasn’t, but he is always trying to better himself. We’ve been together 11 years, married, kids.

Went through so much together. Couldn’t imagine life with anyone else.”

“I swear to God, it was exactly like the first time he sees Maria in West Side Story.

The entire rest of the room went blurry and she was the only person I could focus on and I just went “wow”.

I made up my mind to talk to her, rudely butted into whatever conversation she was having by saying “I have relatives in Sacramento!” and she luckily thought I was cute.

“My first impression was actually mild disappointment and the thought that we weren’t compatible because he wasn’t laughing at my jokes.

In retrospect, I realized that at our first meeting, my now-husband was literally dumbstruck.

He was like those cartoons where their jaw dropped and they couldn’t say anything coherent.”

“Impressed/floored; beautiful, smart, mannered, successful, out of my league.

“When I first met my wife, I was convinced she’d simply get up and leave the date.

As time went on, I realized she was nervous and had a terrible self-image despite being drop-dead gorgeous.

It took me weeks to realize she thought I would walk out on her.

“She thought I was a creep when I said hello. I was just looking for a someone to spend a few days with while on vacation, we were both single travelers in a hostel.

Wasn’t the first time I was single traveling, usually managed to get a group together within a few days. Not this time, we ended up spending the entire vacation together, just the 2 of us.

Not immediately attracted to each other, but we got talking and 6 hours later we were the only 2 left around the pool of the hostel and exchanged numbers and went to sleep (separate) thinking WTF just happened.”

“I was at a Halloween party in my early 20s. Almost every girl at the party was dressed up as a s*xy something.

The woman who is now my wife was dressed up in a full body black robe with face paint, carrying a red lightsaber. A red lightsaber that I accidentally broke while playing around at the end of the night.

I’m extremely lucky that she agreed to go on a date after that.”

Cute and quirky; definitely my type. It felt like we already knew each other and we were meeting up after not seeing each other for a while.

“I was working at a restaurant that happened to have a mostly female staff and had a recent string of not so great male servers: one was caught stealing, another one was a perv, and the another was just a tool.

So one shift when an older waitress was training this new hire and said how good-looking the new trainee was “like Zac Efron”, I kind of rolled my eyes and did not have high hopes.

Sure enough, when I went to introduce myself, I did notice he was he was admittedly good looking and actually very polite with a deep voice. We got married six years later.”

Our first ever “meeting” was at a movie night of a mutual friend. We didn’t even speak as far as I remember.

It wasn’t until about a year later she showed up at a party in the local youth club where I was bartending that we got to chatting.

Tried putting the moves on her, but didn’t seem like it was working.

Same mutual friend as the movie night then nudged us together over the next week (“dude, I swear (s)he’s in to you!”) and here we are 10 years together, 4 years married and 2 kids later…”

Do you remember your first impression of your spouse?

If so, tell us in the comments.